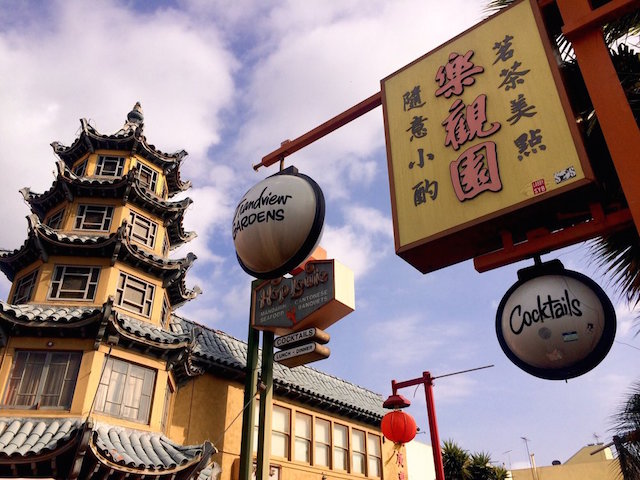 (Photo by Jessica B. via Yelp)

Iconic Chinatown restaurant Hop Louie is closing its doors its kitchen after more than 75 years in business, but diehard fans of vintage L.A. needn't say goodbye without a proper farewell.

Charles Phoenix, an entertainer, historian and high emperor of all things Southern California kitsch, will be convening a Last Supper at Hop Louie Monday night for all who want to pay their respects and dig into one last dish of crab rangoon at "the world’s greatest pagoda-shaped Chinese Restaurant," as Phoenix describes it.

"[Hop Louie] is an L.A. icon," Phoenix told LAist. "It's legendary and it's loaded with history."

"I always say if Lucy and Ethel were going to go for Chinese food, this is where they'd go," Phoenix said. "It's mid century Chinese modern—you don't see that a lot anymore."

The meal is technically "no host," meaning you'll pay for your own 1950s-style Chinese food, and "Exotica" style is encouraged. Mourners and revelers are invited to gather at 950 Mei Ling Way at 5 p.m. tonight, per the Facebook invite. On the invite, Phoenix also advises that no reservations will be taken, the restaurant may run out of food, and there could be a wait for a table. Cocktails, however, will be available. All in all, sounds like a pretty authentic Hop Louie experience.

"I love the layers of time. I love the Americana experience. I love kitsch. When a place like this is closing, I want to go and celebrate it one last time," Phoenix told LAist, adding that he also wants to show his thanks to Hop Louie's owner and management.