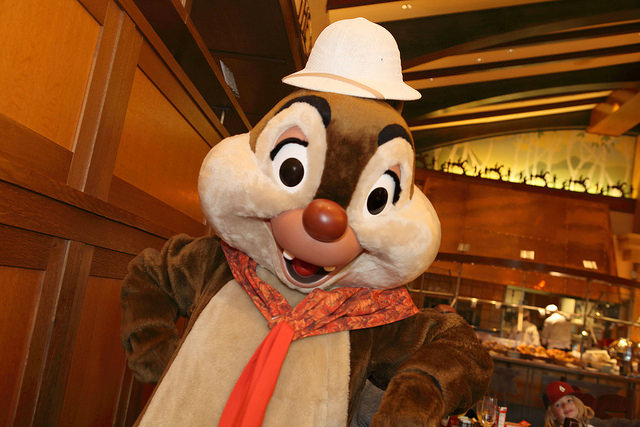 Dale (of Chip and Dale) greeting visitors at the Grand Californian Hotel. (Photo by Sam Howzit via the Creative Commons on Flickr)

A summer vacation turned into a nightmare for a Bay Area family after they were bitten by bedbugs at a Disneyland hotel, and now they're suing, reports CBS 2.

The alleged incident happened in August of 2014 at the Grand Californian Hotel in Anaheim. On Thursday, the Jones family filed a lawsuit at Los Angeles Superior Court alleging battery, negligence, fraudulent concealment, nuisance and both intentional and negligent infliction of emotional distress. Joseph and Danielle Jones (who are also filing on behalf of their three daughters) said that the first signs of something amiss was when their 9-year-old daughter complained of itchy red bites on her face. The next day, the entire Jones family discovered that they also had insect bites.

The family says that, when they complained to the hotel, they were told to speak with the housekeeping staff, who later told them that the bites could be mosquito bites. After returning home, a doctor confirmed to the Joneses that their insect bites came from bed bugs. The suit claims that the Joneses' youngest daughter has suffered permanent scarring, reports City Service News.

The family says that the hotel had a history of bedbug complaints before they'd arrived in 2014. On the website BedBugRegistry.com, a site for people to self-report suspected bed bug cases, there have been 13 entires since 2010 for the Grand Californian Hotel. As noted in a 2013 Voice of OC article, bedbugs are especially persistent in a tourist town like Anaheim, because people trek in bugs through their luggage. Bedbug incidences spike in the summer, when tourism is at its peak. And it seems that the bedbugs don't discriminate along socioeconomic lines. Voice of OC noted that both the Grand Californian Hotel (which, at the very least, costs about $380 a night) and a nearby Super 8 Motel had a similar number of bedbug reports.

The problem isn't just centralized in hotels, however. "The public is under the impression that the number one place for bedbugs is hotels, due to media reports," Gail Getty, a consultant and former entomologist at UC Berkeley, told the Voice of OC. "But the real battle is being waged in multi-unit housing. I see it a lot in low-income communities, apartments with 15 to 16 mattresses on the floor." As housing costs increase, some renters are turning to crowded apartment complexes in low-income neighborhoods.

LAist has called and emailed Disneyland about the lawsuit. We will provide updates when we get them.