The Smell Won't Be Demolished, But Its Neighbors Might 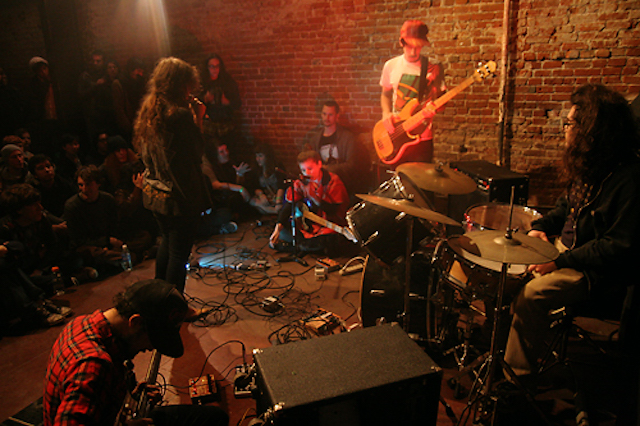 Pocahaunted performs at The Smell in 2009. (Photo by la-underground via the Creative Commons)

We have good news and bad news from the world of downtown development. The good news is that beloved punk venue The Smell will be spared from the wrecking ball, despite fears that stemmed from a demolition noticed posted on the building in May. The bad news is that its neighbors might not be saved.

Kevin Litwin, chief operating officer of Joe's Auto Parks, told Curbed that Joe's parent company, L&R Group of Companies, is considering tearing down the building at the corner of 3rd and Main streets to build yet another parking lot. Litwin said the building "is just kind of there" and that its businesses, which include Shish Kabob and Much More, La Costeña Bar and Five Star Bar, were not contributing much to the block. The Smell (along with the Downtown Independent Theater and the New Jalisco Bar) is in another structure down the block which is separated from the corner building by—yep—a parking lot.

Calls were made to Shish Kabob, Los Costeña, and Five Star but LAist was unable to get any comment.

Litwin also told Curbed that the demolition notice pulled for The Smell was a misunderstanding. Regardless of whether or not L&R will spare The Smell's current home, fans aren't taking any chances. A GoFundMe has been launched to aid in the search for a new home, and founder Jim Smith told LAist that he hopes the venue will stay central and in a transit-friendly location.

Several benefit shows have also been held to help The Smell, including one tonight at 356 Mission.

In related news, Smell vets No Age have released a new song! Check it out: