Your Guide To The 2016 Echo Park Rising Festival 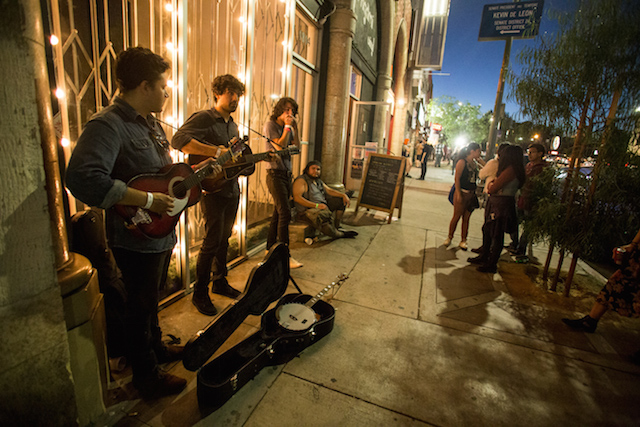 Thursday night marks the start of the 6th annual Echo Park Rising, a locally oriented festival meant to highlight the creativity and vitality of the neighborhood. The festival features approximately 300 bands, dozens of comedians, and special offers from local businesses during its four-day span. With so much going on, here are a few recommendations to get the most out of your weekend at EPR.

Everyone is going to tell you to see headliners like Bleached, Froth and Chicano Batman, as well as larger undercards such as the big Lolipop Records vs. Burger Records battle, Chastity Belt or Ducktails (Real Estate's Matt Mondanile). Here are some smaller acts that we recommend:

Edith Crash: A one-woman band who sings in French, Spanish and English to create dark and haunting, drawn-out melodies. Saturday, 4:45 p.m. at Trencher.

Fakers: With a song about local dive bar the Gold Room, these are obviously are local boys who love the 'hood. Expect loud, brash rock and a crowd that's ready to dance. Saturday, 7:15 p.m. at Taix's Champagne Room.

Winter: Samira Winter and her backing band create a dreamy, indie rock sound that that makes you sway with a dance partner one second and somberly by yourself the next. Friday, 5:05 p.m. at the Liberty Mainstage in Taix's parking lot.

Pizza Time: This band has grown from a low-fi act who literally sang only about pizza to a full-fledged surf rock punk band. Sunday, 3:50 p.m. at The Echo.

So Many Wizards: In recordings, this group sounds like a polished rock-pop group, but live they tend to perform a bit grittier and with more intensity. Either way, we love to see them or listen to their sound. Saturday, 9:45 p.m. at Stories Books and Cafe and Sunday, 7:45 p.m. at Spacedust.

OTHER FUN THINGS TO DO AT ECHO PARK RISING

Hit The Dance Floor: While there a lot of awesome live bands, it's sometimes just fun to go to a bar and dance your butt off while enjoying some good cocktails or summer lagers. The Holloway will be featuring DJs all weekend and happy hour Thursday and Friday from 5 to 7 p.m.

Good Heroin: Although there will be plenty of amazing comedy going on this weekend, we'd like to make special note of an Echo Park-grown show that will be doing three showcases this weekend, instead of their weekly show at Stories Cafe. Started in January of 2015 by Matt Ingebretsen and Dave Ross, they've quickly become a local institution with big names and up-and-comers alike. This weekend's highlights include Emily Heller, Andy Kindler, Baron Vaughn, Alonzo Bodden, Jake Weisman and Kyle Kinane. You can catch it at Stories Books and Cafe Friday and Saturday at 10 p.m. and Sunday at 6 p.m. 1716 W. Sunset Blvd.

Bob Baker Marionettes: Built in 1953, the Bob Baker Marionette Theater is L.A.'s longest-running family theater institution and one of the oldest puppet theaters in the U.S. Founder Bob Baker died in 2014, but the theater remains a historical landmark and still puts on performances daily. The theater isn't located in Echo Park proper, but in the nearby neighborhood of HiFi (Historic Filipinotown), but the puppets will be making an appearance Saturday at 11:30 a.m. at the El Centro Del Pueblo, which has other kid-friendly music and activities throughout the day. 1157 Lemoyne St. near the intersection with Sunset.

Deals, Deals, Deals: Several local businesses are featuring special EPR discounts. Bedrock.LA, a local recording studio, is offering 20% off on rehearsal time. Shirt/jumper designers Dream & Destroy will be having a T-shirt giveaway. Cosmis Vinyl features live performances as well as 10% off records and cassettes. Lemon Frog Vintage will give discounts to those with receipts from other EPR venues and will also be giving away free gifts with purchase. Eightfold Coffee has 15% off on select retail items. The Semi-Tropic has drink specials to go along with their live performances. And Esqueleto will be giving 10% off on all items by local artists.

Full lineup, schedule, and VIP tickets available at Echo Park Rising's website. The event is technically free, but for $11.50 a day or $25 for the whole weekend you can get VIP passes that come with front-of-line privileges, easier bar access and a gift bag.