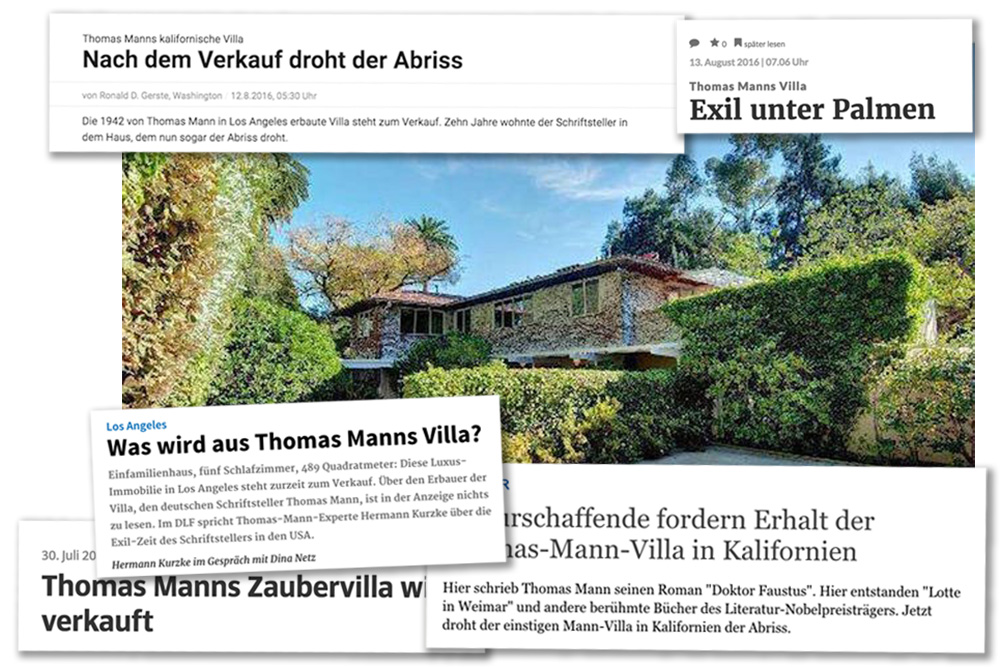 Thomas Mann's former Pacific Palisades house, where the author lived in exile from Germany from 1942 to 1952 is for sale—and the German intelligentsia is very worried.

The listing has received wide press coverage in Germany, with pieces appearing in national and regional papers, and even a segment on Deutschlandradio, which is sort of like the German NPR. Fearing that the Nobel Prize winner's former dwelling could be demolished by a future owner, German intellectuals and literary scholars have called on their federal government to purchase and preserve the home.

Arguably the most influential German writer of the 20th century, Mann was among the German and Austrian writers and artists who lived in exile in Los Angeles in the 1930s and 1940s. The group—whose presence earned L.A. the nickname "Weimar by the sea"—included Arnold Schoenberg, Theodor Adorno, Bertolt Brecht and Lion Feuchtwanger, among other luminaries. Under the unrelenting California sun, the exiles "transplanted the flower of high Teutonic culture into the gorgeous, uncultivated garden of Southern California," as The New York Times once wrote, and helped make Los Angeles into a burgeoning cultural center. As Erhard Bahr explained in Weimar on the Pacific, "The presence of German exiles shaped the cultural life in Los Angeles, especially in the fields of music, theater and film."

Famous for writing classics such as Doctor Faustus, The Magic Mountain, and Death in Venice, Mann and his family fled Germany when Hitler rose to power, first to Switzerland, followed by a a brief tenure at Princeton before making Los Angeles their home in 1941. Though his name may no longer be a household one among young Angelenos, it's difficult to overstate how renowned Mann was at the time (and still is). Even in America, he and his family were ubiquitous enough that "daughter of Thomas Mann" was a clue used multiple times for The New York Times crossword puzzle in the 1940s and '50s (answer: Erica).

The Manns moved into the house in question, which was custom-built for the family and is now listed for $15 million, in early February, 1942. Richard Neutra had originally assumed he would be chosen to build the home, but Neutra reportedly came on too strong at a party, and Mann became so annoyed at the influential architect's "overzealous salesmanship" that witnesses say he muttered "Get that Neutra off my back." 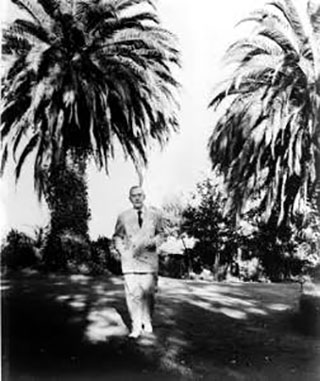 Thomas Mann in the Palisades. (Courtesy of USC Digital Libraries)
The coveted architectural commission was instead awarded to another German émigré, Julius Ralph Davidson—a noted Los Angeles architect who had also served as a set designer for Cecil B. DeMille. It was "exiled author meeting exile architect," in the words of international German broadcaster DW, and the Manns were deeply involved in the planning of the home, which Davidson would later describe as "nostalgic German" in its design.

It was here, at 1550 San Remo Drive, that Mann read unfinished chapters of Doctor Faustus aloud to Theodor Adorno, and later offered commentary to Adorno on his seminal Philosophy of New Music. This is the house where a teenage Susan Sontag visited Mann, as famously recalled in her New Yorker story "Pilgrimage." The fourteen-year-old Sontag sat outside the house "immobilized with awe" for twenty-five minutes before entering.

It was down San Remo Drive that Mann would take his daily afternoon walk with his black poodle Nico, "an incongruous sight—fastidiously dressed in suit and tie...where most people were casually dressed in sports clothes and rarely walked when they could drive in cars," as historian Gerald Nash wrote in The American West Transformed: The Impact of the Second World War. According to Nash, "a galaxy of literary talent gathered in the hospitable atmosphere of Mann's home" on many an evening.

"You ought to see the landscape around our house," Mann wrote to Herman Hesse, describing the view of the ocean, "the garden with its trees—palm, olive, pepper, lemon and eucalyptus—the luxuriant flowers, the lawns that are ready for mowing a few days after the seeds were sown."

"The house was both a social gathering place and also a kind of retreat for Mann," USC Libraries senior associate dean Marje Schuetze-Coburn told LAist. "He was the most respected and important German living in America at that time, consulted by the American government and fellow intellectuals," she said. 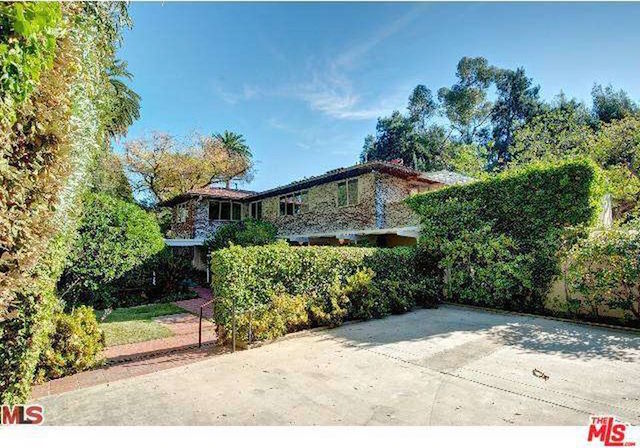 Despite its formidable pedigree, there are currently no formal historical designations on the property, a fact that has not gone unnoticed in Germany.

An article about Mann's "magic villa" that ran in Süddeutsche Zeitung, Germany's largest daily newspaper, in late July asked why the real estate agents were keeping the home's literary provenance "a secret" (the listing doesn't mention Mann's name), and posited that the brokers might be concealing Mann's identity so that the home doesn't become some kind of cultural monument, which could scare off potential buyers.

"Given Los Angeles' reputation as a land with a less-than-reverent relationship to history, the European literati are, perhaps rightly, deeply worried about the home's future."

Of all the exiles, Mann was perhaps the most charmed by Los Angeles. "I was enchanted by the light, by the special fragrance of the air, by the blue of the sky, the sun, the exhilarating ocean breeze, the spruceness and cleanness of this Southland... all these paradisical scenes and colors enraptured me," he famously remembered, and there seems to be a not insubstantial effort afoot in Germany to find a way of preserving the property as a cultural center dedicated to Mann, and his place among the exiles.

Given Los Angeles' reputation as a land with a less-than-reverent relationship to history, the European literati are, perhaps rightly, deeply worried about the home's future. Here's an excerpt (translated from German) from an article that ran last week in Neue Zürcher Zeitung, a Zurich-based German-language daily newspaper that's widely considered to be the Swiss paper of record:


The concern that Thomas Mann's house could even be demolished—recently articulated by Peter Richter in the Süddeutsche Zeitung—is not unfounded considering Greater L.A.'s modest historical consciousness and overheated real estate market. In this stronghold of youth culture and plastic surgery, an object from 1942 is almost unattractively old. Something new could be built on the superbly located plot, which could then be thrown on the market for several times more.

Ouch. And yet, we can't blame them. Here's an actual quote from the listing: "Create your dream estate or remodel and expand the existing home in the ultra-exclusive upper Riviera neighborhood." The agent representing the seller seemed equally unimpressed by the home's lineage in an interview with Los Angeles Times architecture critic Christopher Hawthorne, "saying she had a hard time imagining that any potential buyers would be interested in its history."

German curator Jürgen Kaumkötter has called on the German government to buy the property to prevent any possible demolition, according to DW. "The Villa in Pacific Palisades is as important as the Goethe House in Frankfurt," literary scholar and Thomas Mann expert Heinrich Detering—another of the scholarly figures advocating for preservation—told the Rheinischen Post. 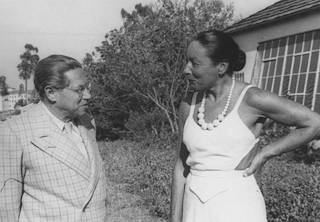 Lion Feuchtwanger and wife Marta at Villa Aurora in 1945. (Courtesy of USC Libraries)
Though the idea of a government purchasing a $15 million five-bedroom home in a foreign country because a very important writer lived there for ten years a half-century ago might seem unfathomable to our American ears, it's not actually unprecedented for the Germans.

Villa Aurora, the palatial former home of fellow literati exile Lion Feuchtwanger and his wife Marta, was purchased by the German government for around $2 million in the early 1990s and now serves as "a kind of artists’ colony/German cultural center," according to The New York Times. Much like Mann's San Remo abode, Villa Aurora had served as a kind of literary gathering place and salon the refugees.

"[Mann's house] could serve as a meeting ground for young writers, perhaps in combination with the Villa Aurora," Kaumkötter, the German curator, told DW.

"I think it would be a tragedy [for Mann's former house to be demolished]," Schuetze-Coburn, who directs the Feuchtwanger Memorial Library at USC, told LAist.

"If you could figure out how to fund something like that as a memorial or place of intellectual conversation and or residence for artists and writers, I know that they would be inspired by working there," she said.

Thanks to Leon Dische Becker for generously translating several of the articles mentioned above into English.