The Opossum: L.A.'s Most Anxious Animal 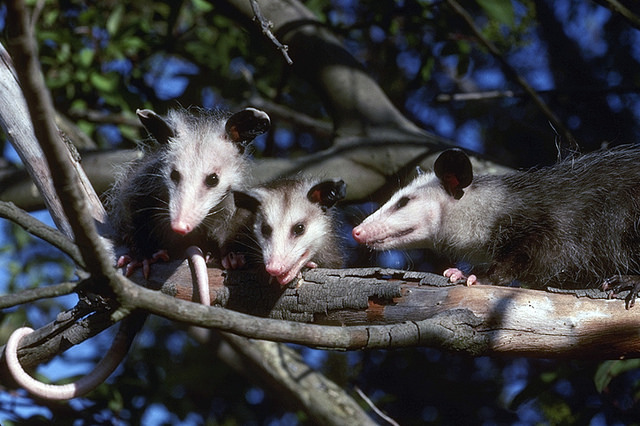 Come on, they're totally adorable. (Photo by California Department of Fish and WildlifeFollow via the Creative Commons on Flickr)

L.A., our city of fair weather and tropical-looking palms, is often mocked for its insistence on leisure. Us Angelenos are so bent on relaxing, in fact, that we've made it a staple of our commerce. We shell out money on our flax seed smoothies, our hyperbaric chambers, and our (apparently endless) supply of yoga studios. So prevalent is this idea of chilling out, in fact, that it seems to have pervaded the ecosystem as well. It's not uncommon to find coyotes strolling down our streets at a leisurely pace. And sometimes you'll look out your window to find a bear doing laps in your pool, all lithe and free of anxious thoughts.

Which makes it all the more interesting, then, to see an opossum wobbling across your yard at night. These mammals seem so antithetical to the L.A. County, because they are decidedly not chill. We often find them scurrying down the pavement with a batch of babies clutching onto its back. Their movements are frantic, haphazard, as if someone had sounded the warning horn for a nuclear assault. And if you so much as say a word one of them, they freeze in their tracks, bear their teeth, and start hissing and groveling with mouths dripping in spit.

Why are they so unhinged? So anxious? I wanted to find out, and it didn't take long for me to realize that, simply put, they lead a brief, harsh, and hardscrabble life. Seriously, they have plenty to be nervous about. "Let's just say their existence is pretty challenging," said Aaron Reyes, deputy director of the County of Los Angeles Department of Animal Care and Control. 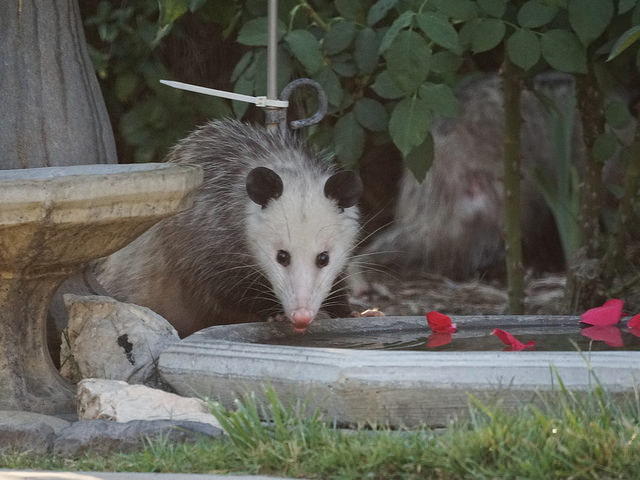 Copping a sip from a birdbath. (Photo by Mike's Birds via the Creative Commons on Flickr)


Where to begin on their hard luck? First of all, the species that resides in the L.A. County is Didelphis virginiana, the Virginia opossum. The only marsupial found north of Mexico, it's common not just in Virginia, but also parts of the Southeast and they never asked to come to the Southland. According to long-time journalist Joe Blackstock, in the early 20th century they were shipped over here for uniformly awful reasons. They were brought to be eaten, hunted as game, and skinned for their fur. Some of those opossums escaped their captors and fled into parts of the Southland, and here they proliferated. But whereas Florida is plentiful with green, verdant landscapes, Southern California has grown to be dominated by asphalt.

"Cars are up there with the biggest threats to them," said Janet Chaney, who volunteers in San Bernardino as an opossum rehabilitator. She said that, on average, 200 to 250 injured opossums are brought to her care annually.

And even if they manage to dodge your Hyundai Sonata, they still have to deal with a dizzying list of hazards in the county. It's common for them to get mangled by dogs, coyotes and feral cats. And sometimes the cats will pass on fleas, and those fleas will devour so much blood that the opossum—especially if it is young—will die of anemia. Pesticides can be fatal, too. And then there's Turgida turgida, a common parasitic worm that enters the opossum's gastrointestinal system, overwhelms the colon, and proliferates at such an alarming rate that you may find them teeming in the back of an opossum's throat. Don't Google it—just trust me on this one. It's no surprise that their average lifespan hovers around the one-year mark.

They have the humans to deal with, too, of course. Earlier this year in Riverside, there was a harrowing case in which an opossum was found with two arrows in its body—one of which was stuck in its head. While the opossum survived, it also lost its capacity to live independently in the wild. "When you get an arrow through your frontal lobe, it kind of lobotomizes you. So [the opossum] wasn't set for release," explained Karolyn Verville, who heads Sunshine Haven Animal Rescue & Wildlife Rehabilitation in Riverside. 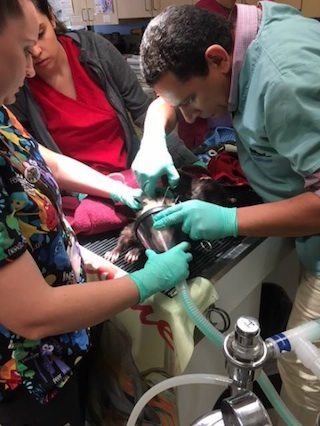 Doctors work to save an opossum at the Riverside County Animal Services. It had been shot with two arrows early this year. (via Facebook/Riverside County Animal Services)
Reyes noted a similar incident in Santa Fe Springs. A woman had called Animal Control to say that a neighborhood kid had shot arrows at an opossum, critically injuring it. By the time experts arrived at the scene, the boy had bludgeoned the opossum to death, stuffed it in a bag, and disposed of the evidence. "I think he ended up getting compassion training," said Reyes.

You may think that Southland opossums are nervous because they haven't yet learned to exist comfortably in an urban society. But even if we took away the environmental factors (dogs, humans, the Toyota Prius), opossums still face an uphill battle. It's almost as if their genes had set them up for misery.

Take this nugget of trivia: a female opossum can have up to 25 babies in a litter, but only up to 13 of those babies will survive, because the mother only has 13 teats in her pouch to feed with. As such, the birthing process is a brutal race for survival as the younglings trudge and crawl towards their mother's pouch. The first 13 to make it are rewarded with sweet ambrosia. The others will get eaten by their mother.

And even if they're lucky enough to reach adulthood, they're still woefully overmatched in the food chain. Their paws are too delicate for digging, and they are despairingly slow. "They're not as slow as, say, a sloth. But they're definitely not known for their quickness," said Reyes. This all means that they stick with food that is easily forageable: snails, potato bugs, rotting fruit that have fallen from trees, and carrion that no other animals in their right mind would touch.

When it comes to self-defense, the opossum is equipped with only a couple of options. They're dexterous as tree-climbers, and they're also noted for their acting. When frightened, they put up a big show by hissing and stretching their maws. In times of true desperation, they roll out their tongues, fall over, and feign cardiac arrest (this is where the term "play possum" comes from). But, in spite of all the spitting and noise-making, they never make good on their threats. "They're the best actors of the wild. I think they deserve an Oscar," said Verville. Reyes, in spite of his years working in animal control, had a hard time recalling a single incident in which an opossum had actually attacked someone.

And the cruel irony is that their acting—done in the name of protection—reinforces their rep as nasty, pestilence-spreading vermin. "The gaping mouth and growling—that's what people encounter and they don't like that. But opossums have no control over it. It's instinctive," said Chaney. She says that it makes people think they're rabid and "disease-ridden," but the fact is that opossums are rarely infected with rabies. This is because they have a relatively low body temperature, which makes them inhospitable to most germs. "I think they're one of the most misunderstood creatures," Chaney lamented. 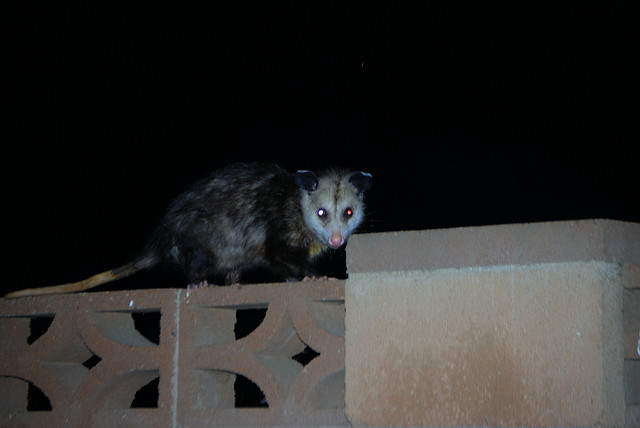 Opossums are mainly solitary and nocturnal animals. (Photo by Fred Rockwood via the Creative Commons on Flickr)

"Misunderstood" is a mild way of putting it. The fact is that, even outside the population of sadistic, cross-bow wielding psychopaths, there are plenty of everyday people who harbor a fear/loathing/aversion to opossums. This is often attributed to their appearance. They "look like bloated rats," said author and gardener Lili Singer in a L.A. Times article. "People are repulsed by their appearance," a director at the Humane Society related to Singer. And they do look as if they'd lost out on the physiognomy sweepstakes: they have beady eyes, a comically extended snout, a coat of fleece-y, dull-colored fur, a stubby mid-section, a naked tail, serrated teeth, and claw-like paws. All in all, not an animal that you'd find on a box of breakfast cereal. And their dazed, frantic nature has led researchers to peg them as being "vicious," "rather dull-witted," and "one of the most stupid animals in the world."

Is this another reason why opossums are always at their wits end? Because they have some inkling that they'e universally unloved? It's curious to me that other animals seem so inured to human contact. Baby cubs are found swimming in our birdbaths. Raccoons will stand in your drive way and look you in the eye. Squirrels scamper around in broad daylight. It's the opossum that's tottering from once place to another in the shadows, hoping that everyone would just forget it even exists. But maybe I'm just projecting my human sense of pathos.

What is evident is that they're harmless. They're little goofy, sure, and sometimes they'll defecate themselves in front of you, but that's just because they're scared out of their minds. Maybe it's just in their nature to be anxious. But we can do our part to make the world a easier place for them; perhaps we can start by forgoing pesticides in our backyards, and even give them a wink and a smile when we spot them on our lawns. And maybe, one day, they'll feel some of that L.A. zen.

If you see an injured opossum, or find a set of orphaned baby opossums, call for help using this resource set up by the California Department of Fish and Wildlife.