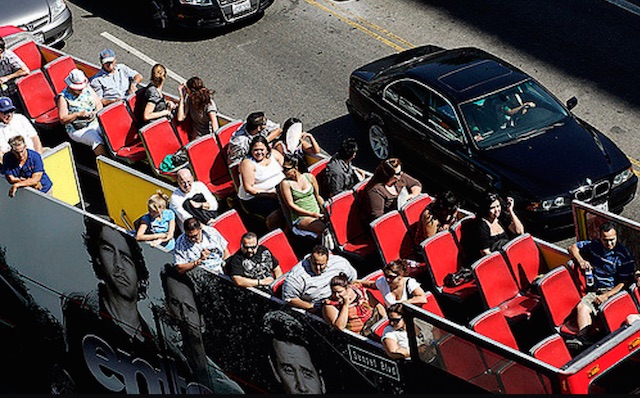 An investigation by NBC Los Angeles has revealed that tourists in Hollywood are being fed lies about our fair city and its famous inhabitants, occasionally at a detriment to residents.

NBC 4's I-Team sent their intrepid reporters on about 20 different tours, which cost up to $50 each. Each tour lasted about two hours and the reporters discovered that many of them were full of deceit, with tour guides pointing out various mansions and attributing them to celebrities who do not live there.

On an LA Scene tour, the station recorded their tour guide pointing out the balcony that Michael Jackson famously held a baby over in 2002. That is frankly impossible. That particular incident occurred at a hotel in Berlin, not in Los Angeles.

A white lie of this nature might seem harmless, but NBC 4 also located a man named Michael Edson, who is suing LA City Tours for allegedly telling people his house belongs to actress Julia Roberts. Edson said that it's been a problem because he gets Roberts' fans and enemies alike stopping by for autographs or leaving him creepy messages meant for her. Roberts has one rather persistent admirer who left a note that read:


Life is unbearable without you and my heart aches constantly. I can't stand the pain any longer. To cleanse our love, I see your house burning in flames around us as we burn and perish hand in hand and are able to finally be together as one through all eternity. We will be together very soon.

Another time, Edson said someone broke into his home and left a rose on the table for Roberts. Roberts has never even been in Edson's home, as far as he knows. LA City Tour's website, meanwhile, advertises, "See 45 celebrity homes and hear the fun stories of their lifestyles."

Other tour companies inaccurately pointed out homes as belonging to the Kardashians, Jennifer Lopez, Justin Bieber and several other celebrities. One homeowner who chose to remain anonymous said they once found a script from an aspiring screenwriter stuffed in their mailbox after a tour company identified their home as filmmaker Quentin Tarantino's.

When confronted about lies, a rep at tour company LA Scene told NBC 4 that tourists don't really care if what they're told is accurate, it's just for fun. He also apparently asserted that if anything, NBC 4's report would only make people want to go on his tours more. A glance at LA Scene's Yelp page reveals a lot of unhappy customers, including one who claimed his tour guide told him Justin Bieber was banned from the United States.

The L.A. Tourism and Convention Board said in a statement that they do not condone any lies from tour companies and want to make sure visitors enjoy a "memorable and authentic Los Angeles experience."

Of the tours they tried, NBC found Starline Tours to be the more accurate, and noted that TMZCelebrity Tours points out landmarks peppered with celeb gossip, but does not include any homes. Those two, notably, are in the midst of a court battle after TMZ decided to part ways with Starline after six years of partnership in May.

We have our own suggestions for L.A. tours, of course, where instead of homes of the rich and famous, you'll uncover our city's street art, neon signs and seedy past.