For $14 Million, You Can Buy Half A Block Of Prime Silver Lake Hipsterdom 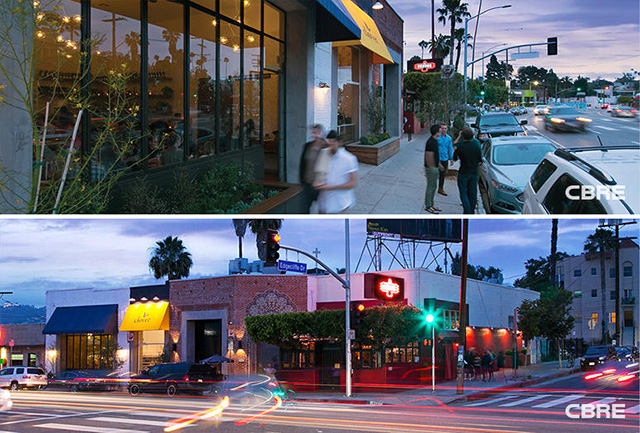 Have you ever wanted to own a hipster juice bar, a hipster Mexican restaurant, a hipster seafood place and some other hipster stuff on a primo stretch of Sunset Boulevard in Silver Lake? Well, this is your chance.

The "Silver Lake Collection," as the 10,497-square-foot street-front retail complex on Sunset has been dubbed, could be yours for a mere $14,168,000. It's not Intelligentsia, but it sure is close.

The complex is "leased to covet," whatever that means, with in-place tenants who are "well suited for the surrounding demographic and customer base of young, hip, upwardly mobile residents." Anyone who begs to quibble on the well-suitedness need only call the juice bar, whose outgoing message actually lists "if you'd like to schedule a cleanse with us, please press two," as an option.

Silver Lake, as the listing reminds us, was named America's #1 Best Hipster Neighborhood. Granted, no less an unhip entity than Forbes Magazine did the proclaiming, and the title was bequeathed back in 2012, which was practically the Eisenhower era in hipster years, but still. Then again Silver Lake only achieved Peak Juice Bar in 2015, so there is that.

Plus, gentrification! Gentrification is a great selling point for any developer looking to drop a cool $14.16 million (or, in rougher terms, the median American household income, times 272) on this opportunity. Here's a direct quote: "Trending Gentrification Recent gentrification of the trade area has made Silver Lake desirable amongst the hip and upwardly mobile Millennial generation." To be honest, I'm not sure that's actually a sentence in English, but you get the idea.

For any of our readers who are asleep at the wheel, the "Silver Lake Collection" is literally across the street from the very same farmers market that Bernie Sanders visited on the day of the California primary. Does it get any hipper than that?

What else is there to say? Occupancy is at 100%, obvi. The property type is classified as a "strip center," which sounds an awful lot like a strip mall, so CBRE might want to rebrand in a slightly less pedestrian category. The asking price averages out to $1,349.72 per square foot, which is basically the same as the median price per square foot for retail in the city, except multiplied by 3.7.

If that sounds like your kind of deal, the full listing can be found here. Otherwise, please press two if you'd like to schedule a cleanse with us.