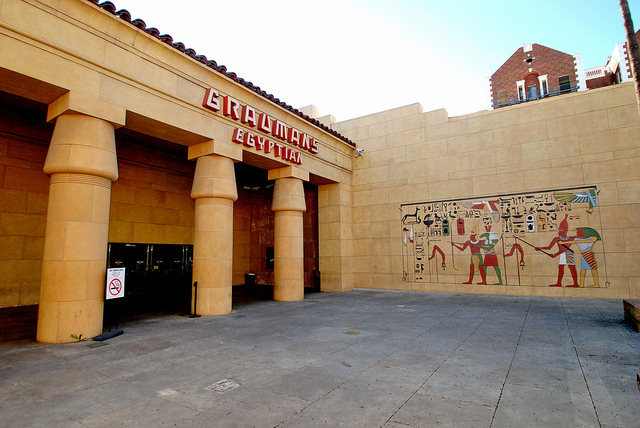 Hollywood's Egyptian Theatre, already one of the best venues for classic movies in Los Angeles, just stepped up their game.

On Tuesday, the American Cinematheque (the nonprofit that oversees programming at both the Egyptian and Santa Monica's Aero Theatre) announced that the historic theater on Hollywood Boulevard would soon be outfitted with the ability to project nitrate prints, a film format that has been discontinued since the early 50s.

If you have any friends who are film geeks—and if you live in Los Angeles, chances are you do—you'll always hear from them how much better it is to see things on 35mm prints as opposed digital projection. (Quentin Tarantino's New Beverly Theater sticks by this—their programming is exclusively 35mm.) Nitrate stock, which was discontinued in 1951, is said to look even better than its successor, the so-called "safety film."

"The art of cinema developed with nitrate from its beginnings to the early '50s, and the silver content gave us a luminosity and a richness that was never quite matched by the safer stocks that followed or their digital reproductions," said director Martin Scorsese in a statement. Scorsese's Film Foundation, a nonprofit he founded for the preservation of film, partnered with the American Cinematheque, Academy, Hollywood Foreign Press Association and Turner Classic Movies to make the Egyptian one of the few theaters in the country equipped to project nitrate prints.

(Spoiler alert: here's what happens with all that film in the movie.)

According to Atlas Obscura:


It is essentially a solid form of nitroglycerin dragged across superhot carbon rods at extremely high speed. If celluloid combusts, which it can do at "car parked in the sun" temperatures, the fire generates its own oxygen, creating a flame which cannot be extinguished. It can burn underwater. It can burn beneath a fire blanket. It burns until the celluloid is gone, and any attempt to smother it creates clouds of poison gas.

Vault fires are, sadly, why so many films from the first half of the 20th century have been lost. The flammability of the stock is also the reason why film projectors have their own separate room in a movie theater.

The Egyptian will now be the second theater in Los Angeles equipped to handle nitrate. The James Bridges Theater, located on the UCLA campus in their film department is the other—and where this writer saw Citizen Kane for the first time on a nitrate print!

The Egyptian has not yet announced when nitrate programming will begin at the theater, but Angelenos can get a taste of it on August 13 when the Hammer Museum's Billy Wilder Theater does a "Nitrate Noir" double feature, featuring Leave Her To Heaven and Nightmare Alley.