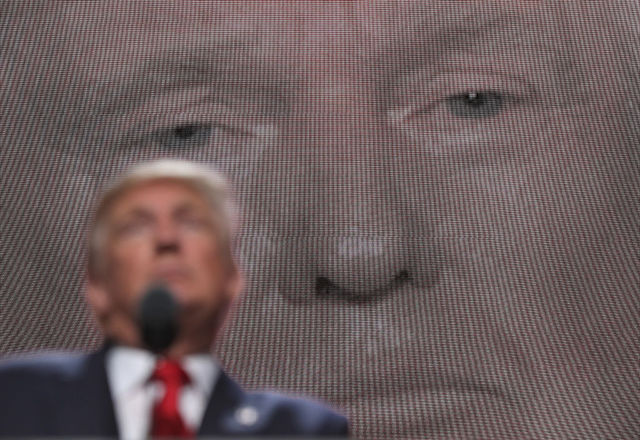 Donald Trump can now add the patriotic theme from Air Force One to the long list of songs that he's no longer welcome to play—Gail Katz, the producer of the 1997 action film, sent Trump a letter Monday demanding that he stop using the score at campaign events.

The list of musicians who have asked Trump to refrain from using their music makes for one hell of a line-up, and includes everyone from Adele and the Rolling Stones to the estate of the late opera singer Luciano Pavarotti.

According to the Los Angeles Times, candidates are not legally required to get a musician's permission before using a song, as long as they pay performance royalty fees. That said, the rock 'n' roll backlash against The Donald started almost immediately after he announced his candidacy last June, when the famously liberal Neil Young spoke out about his song "Rockin' in the Free World," being used while Trump announced his plans to run.

A few months later, Mike Mills, a founding member of R.E.M., had something of a Twitter freakout when he found out that Donald Trump had taken the stage to the band's 1987 hit "It's the End of the World as We Know It (And I Feel Fine)" at a September 2015 rally, tweeting his discontent:

Personally, I think the Orange Clown will do anything for attention. I hate giving it to him.


"Go fuck yourselves, the lot of you—you sad, attention-grabbing, power-hungry little men," Stipe said in a quote emailed to The Daily Beast. (He was likely referring to Trump and Cruz, two Republican presidential contenders who spoke at the rally.) "Do not use our music or my voice for your moronic charade of a campaign."

Trump had attended an Aerosmith concert the year before and tweeted about what a great time he had had. Awkward.


I attended @Aerosmith concert last night in Newark, NJ. Doesn’t get any better than that. @IamStevenT was fantastic, great energy!

The saddest part is it's not just Steven Tyler—these are all songs and artists that Trump really cares about. The New Yorker reported in February that only music from a playlist personally selected by Trump could be played before he takes the stage at rallies. According to the New Yorker, "the list show[ed] a sensitive side, mixing in Elton John's 'Tiny Dancer' and music from 'Cats' and 'The Phantom of the Opera.' But it's heavy on the Rolling Stones—'Sympathy for the Devil,' 'You Can't Always Get What You Want,' and the famously impolitic 'Brown Sugar.'"

The Donald didn't seem to care that Keith Richards had already made his thoughts on his candidacy clear months before those rallies, telling Billboard in September 2015:


...can you imagine President Trump? The worst nightmare. But we can't say that. Because it could happen. This is one of the wonders of this country. Who would've thought Ronald Reagan could be president?

Representatives for the Rolling Stones issued a statement denouncing Trump's use of their music in February 2016, the same month that Adele also asked him to stop using her song "Rolling in the Deep."

Elton John ("Rocket Man" had also been a Trump favorite, along with "Tiny Dancer") slammed Trump's use of his music that same month, later telling The Guardian that it was nothing personal, just differing political views. "Why not ask Ted fucking Nugent? Or one of those fucking country stars? They'll do it for you," John said.

Even House of Pain wasn't having it. In April, the group's frontman Everlast made it very clear that he didn't want Trump on using their hit "Jump Around" at rallies, blasting Trump in a series of tweets and telling Billboard that "This man is going to ruin this country single-handedly."

"Just the fact that he [could be] president is going to get us shunned by the world. This is like some bizarre fucking cartoon. I don't even get it," Everlast continued.

In June, Trump actually agreed to stop using Twisted Sister's classic protest anthem "We're Not Gonna Take It" after the band's frontman Dee Snider (who had been on the Celebrity Apprentice and considers Trump a friend) asked him to nix the song. As Snider told CNN:


When Donald started running for office, he asked me, he called me. He says, 'Can I use the song?' And he's a buddy. And I said, 'Yeah. Go ahead.' But as the months went on, I heard a litany of his beliefs that I'd never discussed with him.

I finally called him and I said, 'Man, you've gotta stop using the song. People think I'm endorsing you here. I can't get behind a lot of what you're saying.' And that night. He has not used it since.

And the musical disavowals just kept on coming. After the family of deceased superstar tenor Luciano Pavarotti found out that the Trump campaign had been using Pavarotti's recording of Puccini’s aria “Nessun Dorma," they joined the chorus of denouncements, with Pavarotti's widow and three daughters issuing a statement last week that called Trump's worldview "incompatible" with Pavarotti's.

The Republican Convention last week was a pretty rough one for Trump, musically speaking. He took the stage Monday night to introduce his wife Melania to the tune of Queen's "We Are The Champions," despite the fact that the band had repeatedly asked him not to use their music in the past (Queen guitarist Brian May had previously spoken out against Trump's use of their 1977 song in June).

"Sony/ATV Music Publishing has never been asked by Mr. Trump, the Trump campaign or the Trump Organization for permission to use 'We are the Champions' by Queen. On behalf of the band, we are frustrated by the repeated unauthorized use of the song after a previous request to desist, which has obviously been ignored by Mr. Trump and his campaign," representatives for Queen's publisher said in a statement last week.

Things were no rosier on Thursday, when Ivanka Trump walked out to The Beatles song "Here Comes the Sun," royally pissing off the estate of the late, great George Harrison:


The unauthorized use of #HereComestheSun at the #RNCinCLE is offensive & against the wishes of the George Harrison estate.

If it had been Beware of Darkness, then we MAY have approved it! #TrumpYourself

Basically, pretty much whatever song Trump played during the convention ended up with its creator disavowing the candidate:


Another unauthorized use (September) at the Republican Convention, against our wishes - Earth, Wind & Fire https://t.co/GV48JxcbGz

Permission to use "All Right Now" was never sought for or granted by me. My lawyer is dealing with this matter. - Paul

Why are musicians so opposed to having Trump play their music, besides for, well, all the obvious reasons?

"When you think about it, there's not much future in scoring the end of the world," Tom Petty and the Heartbreakers keyboardist Benmont Tench told LAist when asked what he thought.