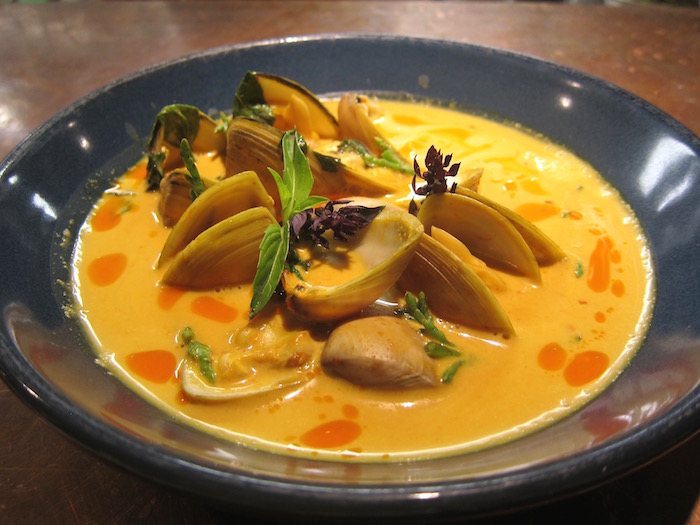 Downstairs from E.P. & L.P.'s hip West Hollywood rooftop bar is its chiller, more refined brother—the restaurant portion where you can get a taste of cuisine that comes from the mind of a chef whose Fijian heritage has trickled into his dishes.

Think Fijian-inspired offerings like 30-year-old chef Louis Tikaram's version of a kakoda, a ceviche consisting of lime-cooked Baja rock shrimp swimming in a sea of a turmeric-hued, freshly squeezed coconut-milk broth, and flavored with the Thai seasonings of chili, lime leaf and lemongrass.

"Traditionally in Fiji, we wouldn't normally add the Thai aromatics, but I think I eat aromatics with everything, so it's kind of hard to eat [dishes] without it," Tikaram tells LAist. "This is a twist I put on it."

His cooking at E.P. & L.P. is an amalgamation of his Fijian-Chinese-Indian heritage, his experience growing up on a 110-acre farm in Australia, and his long career working at Southeast Asian restaurants. Even though L.A. has such a diverse food scene, Fijian fare isn't something we often see in the city. To help us get a better understanding of the culture's best dishes, Tikaram—who often travels to Fiji to visit his parents and grandmother who currently reside there—gave us a primer on what the cuisine is all about.

Fijian food comes two-fold. There's traditional cuisine that is now rare to find on the island country, and then there are the Fijian dishes with heavier Indian and Chinese influences, something Tikaram compares to a Malaysian style of cooking.

"It's quite cool how the cuisine has evolved, but it is quite hard to find traditional Fijian food even in Fiji," Tikaram said. "It's just changed so much."

He laments on the lack of traditional Fijian food on the islands, and blames it partly due to tourism in the archipelago, which is the main source of income for Fiji. Tikaram says that many locals try to appeal to traveling guests, sort of mistakenly thinking that foreigners just want to eat Western styles of food like pizza and pasta. 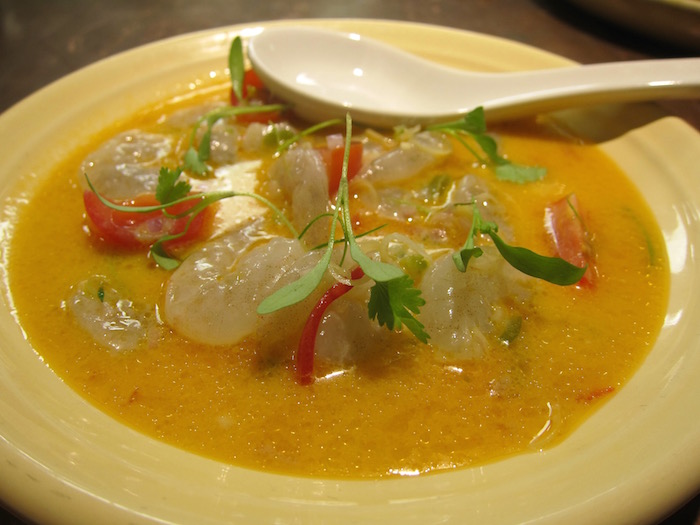 Tikaram thinks fondly of the traditional dishes, the ones that consist of seafood, coconut, root vegetables, seaweed and chili. Simple dishes may run the gamut of fish cooked in coconut cream, to palusumi—a dish you'll also find on other Pacific islands like Samoa—made of taro leaves wrapped around meats. The taro leaves can even be stewed down with coconut milk to produce a similar consistency of creamed spinach.

Then there's the more complex method of cooking, like the lovo, which is cooking in an underground oven. Lovo is reserved for major events—like weddings, birthdays and funerals—because it requires a laborious process to make and produces enough food for a feast. With lovo, you start a bonfire with hot river rocks, which get dumped in a pit. Chicken, pork, beef, fish or vegetables are wrapped in banana leaves, placed in the hot pit, buried under dirt, and then slow-cooked for four to five hours. The end result is meltingly tender meat with an "amazing herb flavor," Tikaram says. It's served alongside of raw seafood dishes—like the kakoda E.P. & L.P. offers—during the feast.

As for the more popular food that you'll find in Fiji, it derives from the massive Chinese and Indian migration over the last couple of centuries. Tikaram notes that Indian dried spices like cumin, coriander and turmeric have melded with the traditional Fijian uses of coconut cream and fresh seaweed.

Tikaram's grandmother lives in the Fijian capital city of Suva, on the eastern side of the main island of Viti Levu, which has a large Chinese influence; his parents reside on the western side in a town called Sigatoka that has a strong Indian community.

"It's crazy, you can drive from one side [of the island] to the other in about three hours, but it's so diverse—the landscape is so crazy in just that short time span," Tikaram says.

In Suva, the weather is wetter and cooler—tropical and monsoonal—which lends itself to growing Chinese vegetables like bok choy and morning glory. On the western side, the weather is extremely dry and arid, which works well for growing sugar cane. Today, you'll find Indian and Chinese markets and restaurants scattered across the Viti Levu. 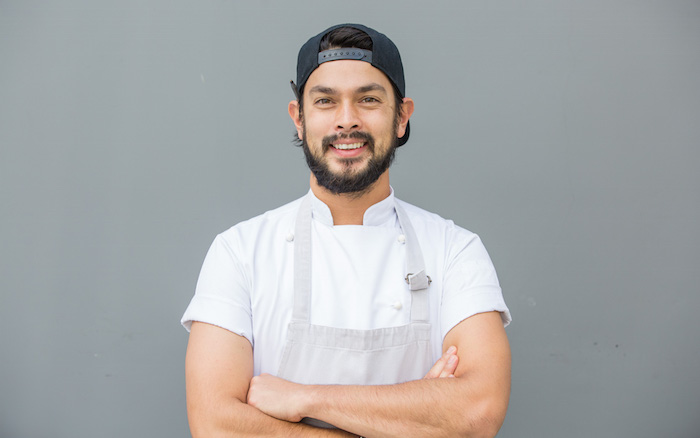 Those cultural influences from Fiji have inspired some of the other dishes at E.P. & L.P, like Tikaram's nama sea pearls—a seaweed ceviche of sorts using sea grapes (aka nama)—a beautiful string of jade-hued pearls that he gets directly from Hawaii; he says they are similar to the ones he used to use from Fiji. Similar to the kakoda, the sea grapes sits in coconut cream, chili and lime.

His curry is also reminiscent of something you might find in Fiji, made with dried spices and coconut cream. And then there are Tikaram's more pan-Asian-meets-Californian-inspired offerings, like the sticky, caramelized five-spice spare ribs; and his spin on elote, where the grilled ears of corn smothered with seaweed butter, Tajin seasoning and chili, and paired with a light, dehydrated tapioca crisp that's similar in texture to the shrimp crackers you might get at a Chinese restaurant.

Tikaram's experience living on a farm in Mullumbimby, on the eastern coast of Australia, has extended to the way he approaches the ingredients in his food today. The farm had avocado and banana trees, but his father also planted orchards full of exotic fruits and vegetables that reminded him of his home in Fiji—like guavas, acerolas and jabuticabas.

"We had a massive veggie garden so we didn't do much shopping," Tikaram says. "Everything we ate was always out of the garden. We had a creek running through the property and a spring where we all drunk our water from."

Tikaram has close relationships with the farmers he works with, and travels everywhere from Coachella Valley to Santa Barbara County to visit them.

"I have that great respect for farmers and how hard they work and I really like to support where the food is coming from as well," he says. 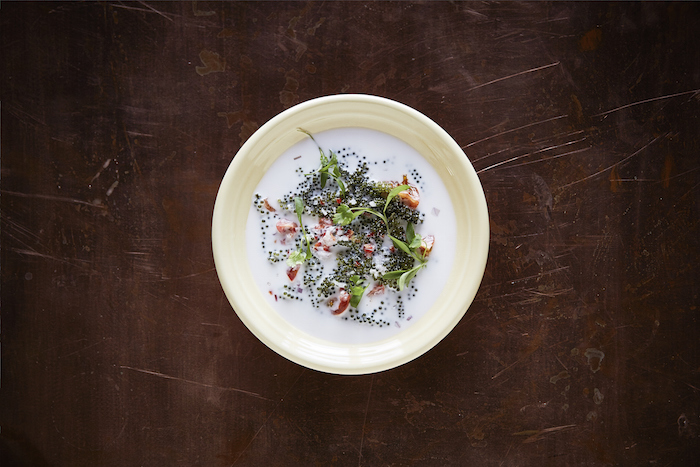 Tikaram started his career at the age of 16, moving up the ranks from dishwasher to cook at a hole-in-the-wall Thai restaurant. When he finished school, he saved enough money to buy a car to drive all the way down to Sydney—about a 500-mile drive—to crash at the home of his brother, who was attending university there. On his first morning there, he walked over to Longrain, one of Australia's hottest Thai restaurants, and asked the owner for a job. Tikaram was quickly rejected, but after showing up at the door for three days in a row, chef Martin Boetz took him under his wing.

Tikaram spent the next year in a 20-foot-by-10-foot room grinding spices and making curry pastes. "I knew everything about the kitchen and what went into every curry paste, every sauce, every spice mix—and some of the senior chefs didn't know this," he says. "It was a blessing and curse to do this for the whole year."

Boetz gifted Tikaram with his first chef's coat and set of knives.

Tikaram would spend the ensuing years working at restaurants like Tetsuya's—a high-end Japanese-French restaurant that ranked among the top restaurants in the world—and traveling to every country in Europe and all around Southeast Asia while learning how to cook French and Italian food. When he returned to Australia after spending the last two-and-half years living out of a suitcase, he serendipitously ran into his old mentor Boetz back at Longrain. Boetz brought Tikaram back into the restaurant, where he eventually became the executive chef.

Everything has really come full circle for the chef. The discipline Tikaram learned at Longrain has seeped into his cooking style at E.P. & L.P., where he makes sure to make all his curry pastes from scratch and grinds his own spices. He still thinks about that tiny room where he cut his teeth, "I think it was really crazy, but it really molded me into the chef I am today."