The Latest In The Kim & Kanye & Taylor Feud 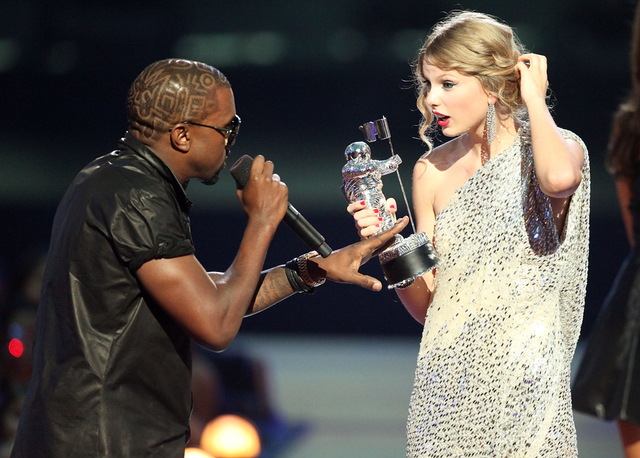 Where it all began. (Getty)

Kanye secretly recorded a conversation with Taylor, and Taylor lied, and Kim called her out, and everyone is being kind of mean, and what is this 5th grade? This week, three adults acting like children created a new drama for their audience, when Kim Kardashian leaked a taped conversation between Kanye West, and Taylor Swift, a person West has known since 2009. The TL;DR is that Swift was caught in what appears to be a big fat lie, and now seems worried it will tarnish her image.

Speaking of images, this could ALL be manufactured publicity, from the "Famous" lyrics to the Grammy speech to Kanye's tweets to the "Famous" video to the leaked conversation. The trio could be working together to accomplish... more, different fame? Also, somehow, Tom Hiddleston has gotten tangled up in this.

The conversation that was released by Kardashian goes against some things that Swift has been claiming for months—when she won some Grammys earlier this year, she used her speech to speak out against Kanye's "Famous" lyrics, where he says, "I made that bitch famous." The phone call, however, seems to capture her approving these lyrics. TMZ has released more of the conversation, where Swift directly responds to the lyric in question:

"And you know, if people ask me about it I think it would be great for me to be like, ‘Look, he called me and told me the line before it came out. Jokes on you guys, We're fine.' You guys want to call this a feud; you want to call this throwing shade but right after the song comes out I'm going to be on a Grammys red carpet and they're going to ask me about it and I'll be like, ‘He called me.' It's awesome that you're so outspoken about this and be like, ‘Yeah, she does. It made her famous.' It's more provocative to say ‘might still have sex…' It doesn't matter to me. There's not like one [line] that hurts my feelings and one that doesn't."

While there was chatter of Swift possibly filing a suit against the couple, it appears they were in their rights to tape the conversation. According to TMZ, " if someone records a 'confidential communication' and the other party to the conversation doesn't know it's being taped, it's a crime. But 'confidential communication' does not include conversations that 'may be overheard.' Taylor knew she was overheard. The conversation from Kanye's end was on speaker phone, and during the call producer Rick Rubin speaks up several times. Members of the crew filming Kanye on the call also speak in the room. There's no doubt listening to the full tape ... Taylor knew she was being overheard. Kanye didn't violate the law by recording it."

If Swift moves forward with a suit, a source told US Weekly that “Kim and Kanye consulted with their lawyers and still went ahead with releasing it... They are not worried. They are sick of Taylor's manipulations and her good girl act. They just wanted to expose her as a fake and will let the lawyers deal with legal stuff."

Swift responded to the leaked conversation right after it happened on Sunday night, via social media, but hasn't spoken up since. That hasn't stopped her video director, Joseph Kahn, from awkwardly trying to come to her defense by comparing her Taylor to Nicole Brown Simpson, though:

Ain't the first time the Kardashians supported the murder of an innocent blonde woman.

In conclusion, no one looks good here... and we didn't even mention the whole Khloe thing.