By Samuel B. Prime

From modern sci-fi classics like The Terminator and The Matrix, to cult action and horror obscurities such as Never Too Young To Die and Man's Best Friend, Ernie Wolfe III is the foremost expert and collector on jaw-dropping, hand-painted Ghanaian movie posters. Equal parts art historian and wilderness adventure guide, Wolfe's work defines his life. On a Saturday afternoon in April, he invited me over to spend a few hours in his gallery to explain how it all began. 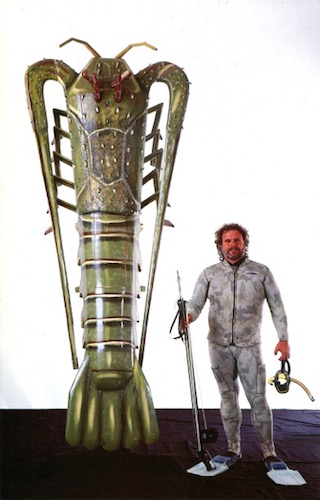 Wolfe, proprietor of West L.A.'s Ernie Wolfe Gallery, flicked on a light switch and gestured to a towering slime green obelisk in the corner of the gallery's back room. "That is my coffin." In the new light, claws, carapace and antennae revealed a lobster destined to some day escort Wolfe to the other side. To Wolfe, the lobster is a symbol of sport, sustenance, even religion. "To be able to catch a lobster is a bounty that is beyond any expectations in all that it yields," he confided. To Wolfe, the lobster is a way of life.

"The lobster problem came early," he sighed. Whatever was to come next, that was a hell of a preface. "My shrine." Adjacent to the rear entrance of the Ernie Wolfe Gallery is an otherworldly totem comprised of lobster tails, fish remains and old cigars, like the throne of Triton unearthed from its grotto kingdom and placed clandestinely among the world of men; a relic of Atlantis. A gold plaque to its left simply reads: "Please respect my shrine." But despite the importance of the lobster in Wolfe's life, it has never been his profession; instead, a passion. In this case, a passion that led to his lifelong career as a collector and historian of African art and, in particular, original hand-painted Ghanaian movie posters.

Wolfe originally traveled to Kenya in the mid-1970s to teach scuba diving for a safari company. In Kenya, he set upon the country with "fresh eyes" and discovered African art that earned him an exhibition at the Smithsonian Museum in 1979 titled "An Introduction to the Arts of Kenya," the first time that nonfigurative African art had been exhibited in North America. Wolfe spent the next decade living and working in Kenya, then began traveling to West Africa—in particular, Ghana in the late eighties and early nineties.

While in Ghana, he met a man by the name of Kane Kwei who specialized in the creation of fantasy coffins (of which the slime green obelisk is one). "I walked in after spanning miles of dirt roads and there it was, staring back at me in his showroom. Bought it off the rack. And it was a good catch," Wolfe admits. The fantasy coffin is "a three-part wonderment" comprised of the coffin, a treasure box kept with the family, and a stool used to literally or figuratively commune with a dead relative. After making the purchase, Kane Kwei introduced Wolfe to the man who had painted his coffin, D.A. Jasper. During their first meeting, Jasper implored Wolfe to come look at his "other paintings." Overextended in various areas befitting an art dealer, Wolfe initially dismissed the invitation. But Jasper was persistent and Wolfe eventually accepted his invitation to see what turned out to be stunning, imaginative, hand-painted movie posters that would soon thereafter become, alongside the gallery, the epicenter of Wolfe's life. 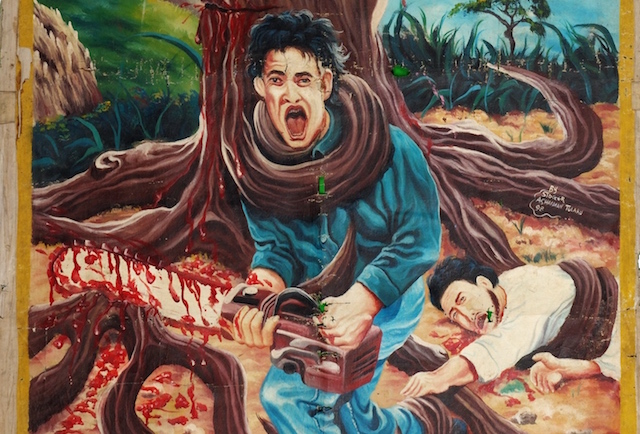 At that moment, Wolfe had been exposed to what he would later clarify as the "Golden Age of Hand-Painted Movie Posters from Ghana," an approximately fifteen-year period between 1985 and 1999 where original movie posters were created for an economically-driven, functional purpose: to accompany rare VHS tapes traveling from town to town like a circus sideshow. As Wolfe explains, "suddenly, with the arrival in Ghana of PAL tapes, video cassette machines, and portable gas generators, they had mobile cinema." Entrepreneurs would set-up a small television set, modest speaker system, and roll into town to introduce entire generations of moviegoers to martial arts, sci-fi, and horror films that otherwise would not have made an appearance until decades later. The posters were most often painted on the reverse side of recycled flour sacks—a makeshift cloth canvas—and then rolled onto wooden dowels for ease of transport. Since each tape required its own unique movie poster, "the best and brightest of a generation of sign painters became the people who created this work."

This Golden Age period lasted until the late nineties, when the demand for hand-painted movie posters was replaced with the comparatively inexpensive technological availability of inkjet printers. Although the mobile cinemas continued to operate, the method of advertising changed. But the posters helped to usher in a sincere love of movies—and a communal spirit of moviegoing—that would not have otherwise existed in Ghana. According to Wolfe, "there came a time when even posters were no longer necessary. All you had to do was place a rock out in front of your place [of business] and that would signal that there was a movie being shown on that day." 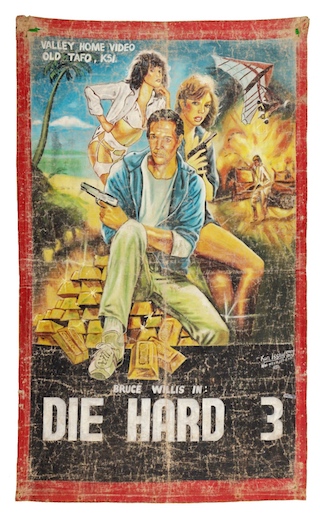 The poster for 'Die Hard With a Vengeance,' featuring a few more babes than one might remember. (Courtesy of Ernie Wolfe)
The Golden Age represents a pure, untouched period of creation. The movie posters were being made exclusively by Ghanaian painters and for Ghanaian mobile cinemas. At that time, there was no Western influence on the creation of the posters. As Wolfe describes it, "the main job of the painters was to be crowd-pullers, which allowed for a significant amount of imagination from the artist to creep into the imagery, because they did not care if the shit that they would portray was or was not in the movie. Ultimately, their job was simple. Get the dudes to see the movie. And the audience would like the movie anyway!" Without being beholden to a studio or a major distributor, the movie poster artists were allowed to take extreme liberties with the subject matter and lend it a personal signature.

"I've always been a collector of stuff," admits Wolfe. As of 2016, Wolfe has toured the posters around the world (most recently an exhibit of martial arts posters in Hong Kong) and published two thick, extensive volumes—Extreme Canvas and Extreme Canvas 2—charting the history of the Golden Age and depicting the work of the artists who define it. He is proud to say that with a collection of hundreds of posters to his name, he remains business partners with every artist whose Golden Age poster work is represented in his collection. "Nobody is getting rich, but each artist receives a percentage of every sale." But Wolfe has accomplished what others who may appreciate these hand-painted posters have not. He has given credit where it is due and worked hard to establish each painter as a legitimate artist. Whether a work is a D.A. Jasper with its hyper-realistic musculature, a Joe Mensah boasting a mind-bending color palette, an Alex Boateng with its exacting detail of perspective work, or any one of more than twenty other artists comprising the Golden Age of movie posters, each boasts their own unique and identifiable qualities.

Celebrating its 35th year in West L.A., the Ernie Wolfe Gallery is in the midst of planning a screening series that recreates the age of video clubs and mobile cinemas. The series aspires to explore the far reaches of rarely screened Nigerian and Ghanaian action and thriller fare with titles like Heavy Thunder, Traumatized, and Executive Billionaires II, as well as more contemporary slapstick comedies featuring Pete Edochie, whom Wolfe describes as "The King of Nigerian Comedy." An official series line-up and start date has yet to be announced, but more information can be found online at the gallery's website or their Facebook page. 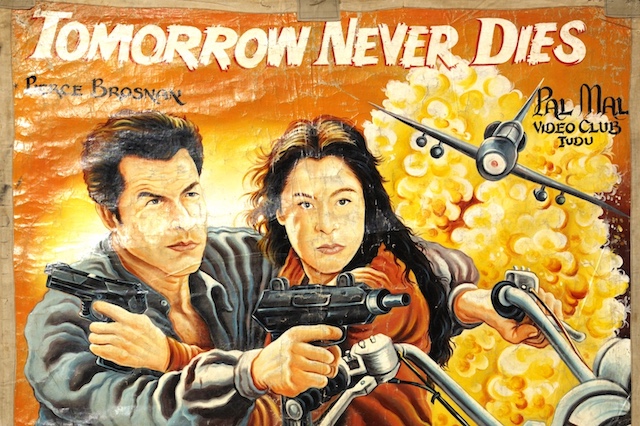 A hand-painted poster for the 007 film 'Tomorrow Never Dies.' (Courtesy of Ernie Wolfe)

Samuel B. Prime is a film advocate, motion picture archivist, writer, and producer who has helmed high-profile events for the Alamo Drafthouse Cinema and UCLA's Melnitz Movies. He has a B.S. in Theatre and Film from Northwestern University and a M.A. in Moving Image Archive Studies from UCLA. He deeply admires Dick Cavett, his all-time favorite Sonny Chiba movie is Kazuhiko Yamaguchi's Wolfguy: Enraged Lycanthrope, and he regularly blogs at LA Ciné Salon.