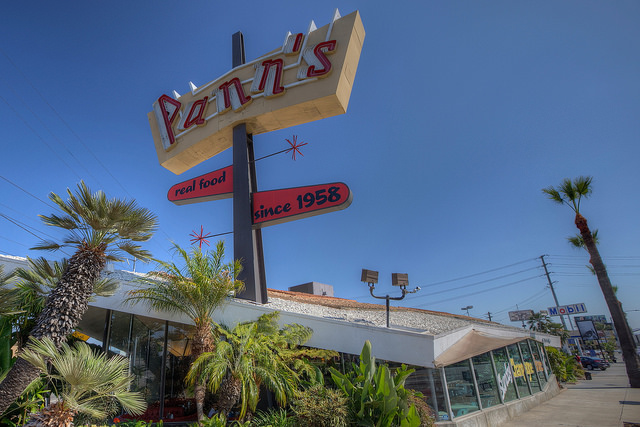 When it comes to coffeeshops, Pann's is as iconic as it gets. The diner opened in 1958 and has been dishing out their fried chicken and cajun andouille sausage for decades. It's also noted for its distinctive Googie-style architecture, and everyone from Vin Diesel to Nicolas Cage have filmed a movie there.

In spite of all the years, Pann's will be undergoing some changes. As owner Jim Poulos told LAist, the restaurant is struggling to keep up with the new minimum wage hikes, and will have to shorten their hours to stay afloat. Starting August 1, the restaurant will be operating from 7 a.m. to 3 p.m., meaning it will be closed for dinner. Poulos adds that the details are still being ironed out, and that there may be modifications to the hours for one of the days. The dinner menu will be gone, of course. But Poulos says that, with the costs saved from not serving dinner, Pann's may look into "expanding with new items” and "passing on greater value for the breakfast and lunch menus."

According to Poulos, the wage hike produces a domino effect that has significantly raised his cost of operations. "The cook who is already making $15 an hour is not going to like it that the dishwasher is making the same amount," said Poulos. He adds that his vendors have been rising their prices because of the wage hike. "It's been a huge hit. How else is the restaurant industry supposed to deal with it? There'll be more automation. They'll be cutting labor, cutting quality."

Poulos adds that he is "making every attempt to keep every one of our evening staff," and is looking into giving them daytime hours.

The minimum wage hike in Los Angeles and L.A. County went into effect earlier this month. The minimum will be increased incrementally every year until 2020, when the wage hits $15. Mayor Eric Garcetti had said in a statement that the hikes will help "build a stronger middle class in Los Angeles, which is good for our entire local economy." Bernie Sanders supporters on FeelTheBern.org argued that a higher minimum wage could actually reduce costs on a broader level:

The restaurant industry, which is expected to take a big brunt of the effects from a wage hike, is not quite as optimistic. In an article for Inc., columnist and restaurant-owner Noah Brodsky laid out a simplified version of his concerns:

...we can't just jack up prices and pass the additional cost along to customers. There are real limits to what people will pay. We can charge only so much for a shrimp tempura roll or a Kobe beef burger before our customers will start looking at other dining options.