There Are Way More Coyotes In Urban L.A. Than Scientists Realized 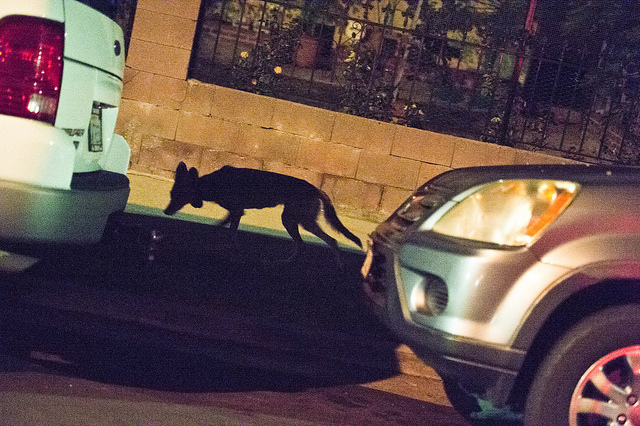 C-144, a female alpha coyote, slinks between two vehicles just past midnight in the Westlake neighborhood. (Photo courtesy of the National Park Service)

Like it or not, we share our city with coyotes. Sometimes they pose as a threat to our pets. And sometimes we go out and shoot them dead in the streets. So it's a gross understatement to say that we lead a tenuous co-existence.

Even though we've been neighbors with them since forever, it wasn't until recently that the National Park Service initiated a study—the L.A. Urban Coyote Project— to learn about the urban habits of coyotes. The project, which launched a little over a year ago, is the first study of its kind, according to KPCC.

"Not much is known about urban coyotes, as opposed to coyotes in their natural habitat, who are very well-studied," Zach Behrens, a senior communications fellow for the Santa Monica Mountains, told LAist. "It's almost like studying different animals even though they are the same species," Behrens said. The team's research involved tagging and tracking six coyotes that roamed various neighborhoods in L.A. 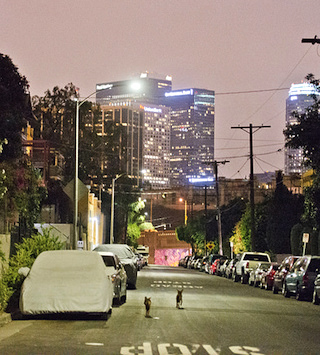 Two of C-144's pups running down a street west of downtown. (Photo courtesy of the National Park Service)
Justin Brown, the ecologist heading the study, named a number of surprising findings from the study's pilot year. For one thing, the coyotes were more than comfortable in urban areas. They set up shop in urban lots. They darted across freeways. One of the coyotes, an alpha female named C-144, was found to be hanging out with her pups in developed areas more than half the time. She mostly roamed around Westlake, just south of the 101 and 110 Freeways.

"I just thought because of the high amounts of human activity, they wouldn't be there," Brown told KPCC. "But they keep proving me wrong every time I turn around."

The project intends to answer a number of questions, like what it is that coyotes are eating, and if their population is growing or decreasing. As noted at The Washington Post, there's still an amazing amount of information we don't know about coyotes: "[B]iologists still aren't even sure how many city coyotes there are, or whether they prefer scavenging garbage or hunting small game." According to Brown, it may take the study five years before it can determine the typical diet of a coyote.

Our understanding of the animals is, indeed, very limited. And often times it leads to a generalized fear of them, which is especially problematic as urban sprawl puts us in closer touch with coyotes.

Recently, the City of Torrance set up traps at coyote "hot spots" after a rash of coyote-on-animal attacks, reported NBC 4. Torrance animal services said that 60 animals had been killed in the past six months. The decision to set traps was met with outrage from wildlife activists. In June, the Los Angeles Department of Animal Services released a document making clear its stance on coyotes. The department called for more education about the animals, and to increase the city wildlife staff to better handle the matter. It did not, however, recommend the trapping or removal of coyotes.

As noted by The Post, a study showed that there are approximately a dozen reports of coyote attacks on humans per year from 1985 to 2006. By contrast, there are about 4.5 million reports of dog attacks every year, according to the Centers for Disease Control and Prevention.