The Best Vegan And Dairy-Free Frozen Treats In Los Angeles

Summer is in full swing, conjuring visions of cooling down with a classic: ice cream.

But the vegan and dairy-free crowd shouldn't be left out when it comes to sweet refreshment. We ALL scream for ice cream, after all. Luckily, L.A. has a wealth of vegan frozen treat options, including ice cream, sorbet, soft serve, granita and fresh healthy slushies that'll help you beat the heat while staying dairy-free. Some of them are even healthy—that's something to scream about. Here are some of the chilly choices to transport you to frozen fantasy land. 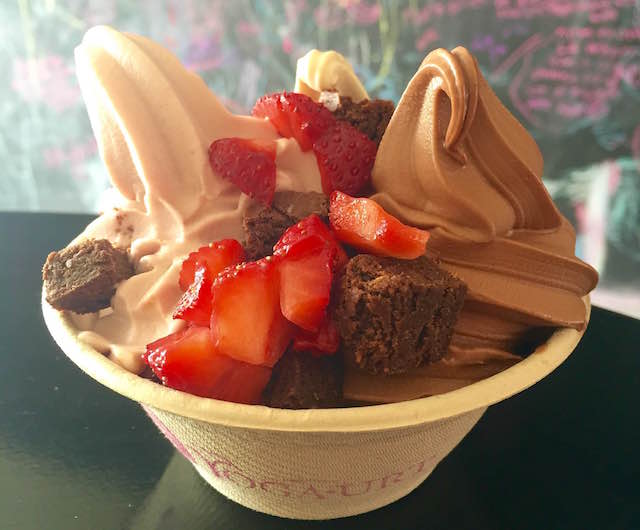 Creamy, vegan organic soft serve at this yoga-themed shop ditches the dairy but adds probiotics so your gut gets served in more ways than one. Namas-yay. Most flavors are made with an almond-cashew base and the oh-so-smooth texture makes it difficult to distinguish from dairy froyo. Rotating flavors include Peanut Butter Prana, Chocolate Bliss, Vanilla Harmony, Salted Caramel Zen, Tantric Tart and more. Vegan gluten-free waffle cones and toppings like granola, mulberries, Charlie's Brownies and house-made chocolate sauce sweeten the deal. For an even healthier treat, get the date-sweetened Ganesha’s Sweet Greens—it's like a green smoothie in soft serve form. 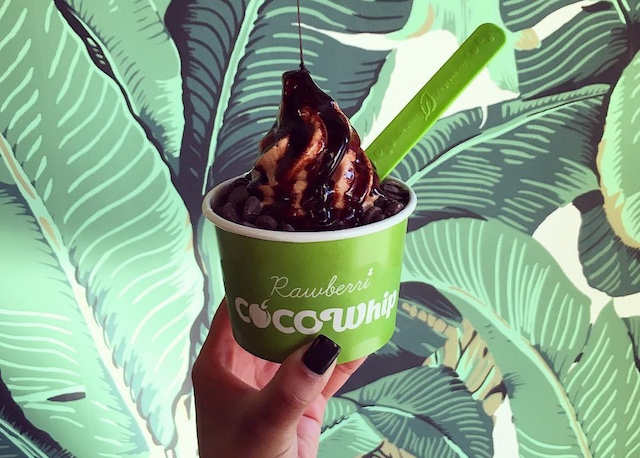 This superfood bowl spot claims to be the first vendor in the U.S. to serve CocoWhip, a vegan coconut soft serve made with bio-fermented probiotics and sweetened with xylitol and coconut sugar. Rawberri serves fluffy chocolate and original flavors and you can choose from vegan organic toppings like chocolate sauce and fresh fruit. Or CocoWhip-it good and get soft serve sandwiched between peanut butter chocolate chip cookies. 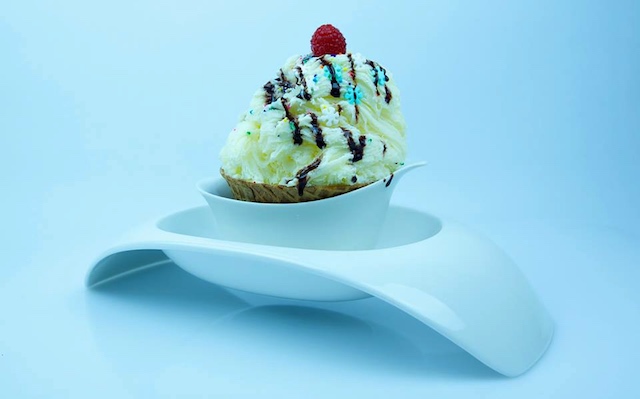 The Japanese-inspired treat of light fluffy shaved ice cream has caught on in L.A. and vegans can have their fill too. Just ask plant-based eater extraordinaire Tim Moore, a.k.a. Vegan Fat Kid, who indulged in a North Pole frozen shaved almond milk affogato topped with almonds and drizzled with chocolate. Soy and coconut ice creams can also get shaved for the vegan crowd. 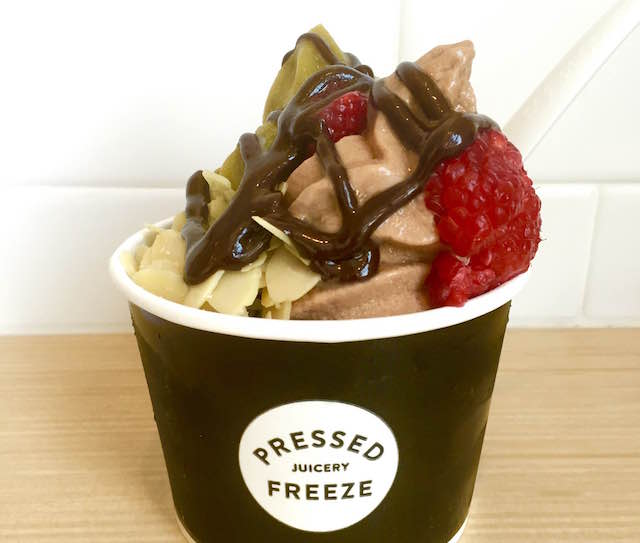 The more chocolate sauce, the better. (Photo by Jessica Hamlin/LAist) 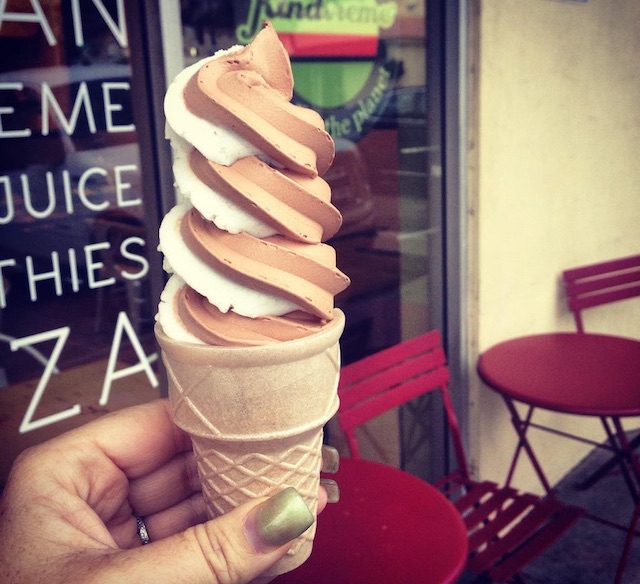 Located inside Sage Organic Vegan Bistros, Kind Kreme's raw vegan organic ice cream comes in a variety of coconut- and nut-based flavors that change by season and availability. Chocolate almond butter, piña colada, caramel apple, and coconut carrot ginger are a few of the frozen flavors you may find, and the texture varies from icy to creamy. For a treat that goes beyond the cup, get your Kind Kreme as a banana split, on a waffle, in a brownie sundae or a kombucha float. They also have soft serve, if you're lucky enough to stop by when the machine is working.

Vegan gelato anyone? Get your fix at this small sweet shop with coffee, banana, mango, chocolate, raspberry, mint, or horchata made with coconut or rice milk. Make it a masterpiece by getting your gelato or fruit sorbet served over a vegan gluten-free almond bar or brownie and topped with fresh farmers market fruit and organic jams like apricot or pomegranate. 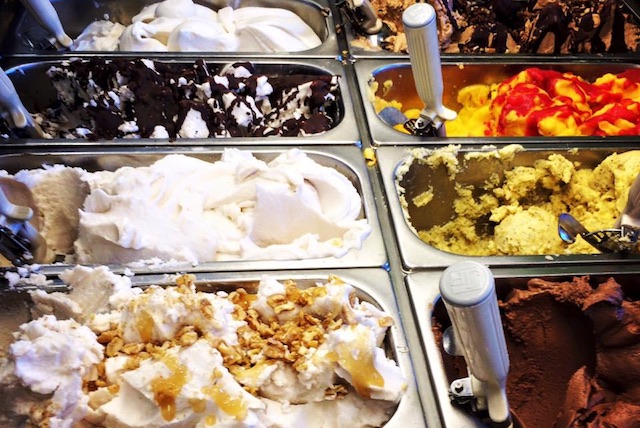 So many flavors to choose from at Kippy's (Photo via Facebook)

This Venice fave makes their own coconut cream and toppings for their organic non-dairy and vegan ice cream. All flavors are made with four or less ingredients, including organic seasonal fruit or spices, and are sweetened with dates (vegan) or honey (non-vegan). Check out vegan scoops like vanilla, coffee, chocolate, or cinnamon, and non-dairy offerings like vanilla cappuccino, double dark chocolate, strawberry or the seasonal peach. Top with their non-dairy magic chocolate shell or raw salted caramel, both sweetened with honey. And in case you thought you'd seen everything in L.A., they even have an ice cream cleanse. 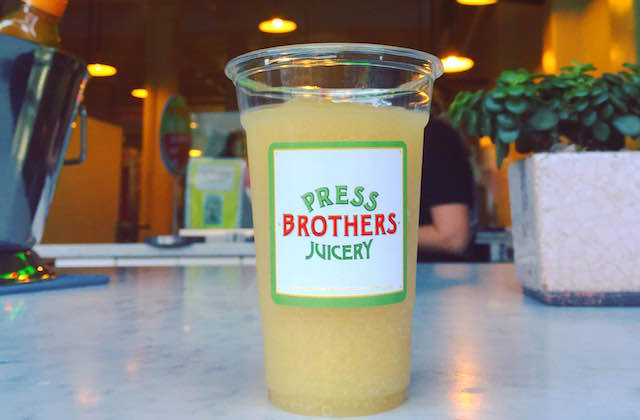 For a pure frozen pick-me-up on a summer day without the sugar coma, get whisked away at Press Brothers. Perhaps the lightest fare you'll find at Grand Central Market, their vegan popsicles and watermelon lime mint or lavender lemonade Refresh freezes (only the best slushie ever) are made with only organic, cold-pressed juice. Cool, refreshing and just sweet enough to leave you satisfied. 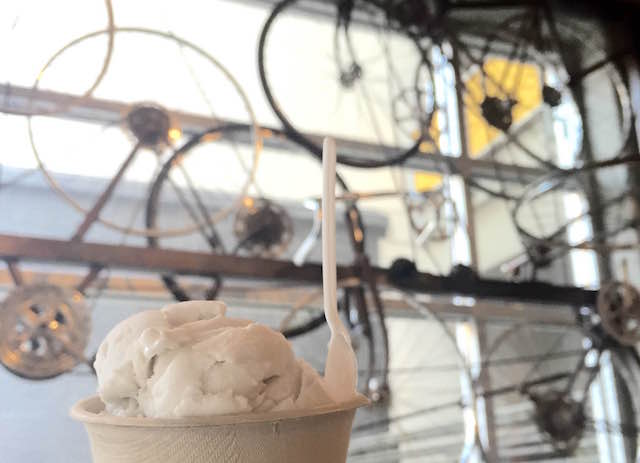 Bicycles are the backdrop at Peddler's Creamery. (Photo by Jessica Hamlin/LAist)

Dessert and cycling collide at this shop that churns its organic ice cream via bicycle. Salted caramel, cardamom, chocolate peanut butter and candied ginger are among the rotating vegan and non-dairy ice creams sweetened with cane sugar. The handmade flaxseed waffle cones, chocolate sauce and sprinkles are vegan too. Want to get a sweet treat and workout in one fell swoop? Hop on the stationary churning bicycle and mix a batch—it takes about 20 minutes, so wear proper ice cream cycling attire—and get free ice cream.

Trek up to this acclaimed gem in an Altadena strip mall where Leo Bulgarini serves up meticulously crafted frozen creations made with fine ingredients sourced from across the globe. While known especially for his pistachio gelato, Bulgarini's non-dairy sorbets and granitas (a traditional Italian dessert somewhere between a slushie and a snow cone) are equally full of flavor. Bulgarini makes everything from scratch—no mixes—so the seasonal strawberry and stonefruit sorbets taste like a pure piece of fruit at its peak. The pomegranate and blood orange granitas are bursting with fruity refreshment. 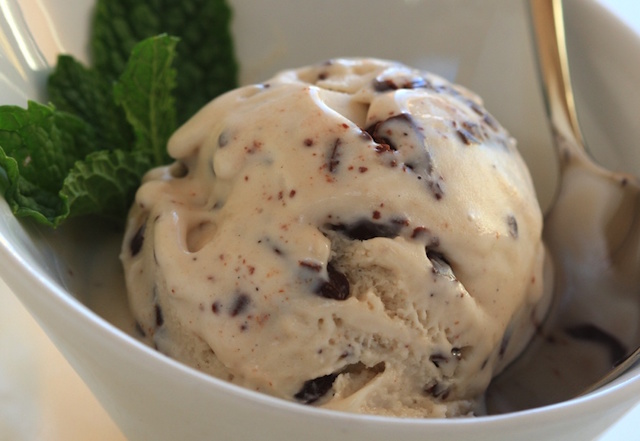 Thai tea, amaretto almond trio, raspberry truffle... these mouth-watering flavors probably aren't what come to mind when you think of vegan ice cream. But Divine Dips' rich, creamy agave-sweetened "ice crème" made with organic coconut milk, cashews and nut milks is a favorite with vegans and could make a believer out of a non-vegan. Find it in the freezer section at select small health food stores or served on the spot from their roaming truck or Bengees Ice Cream Crafters in Pasadena. Bengees has a few rotating flavors like those mentioned above, and the truck has a long list—maple cardamom, lemon yuzu, matcha green tea with pistachios and more—plus cookie ice cream sandwiches.

Divine Dips is served at Bengees Ice Cream Crafters (901 E. Del Mar Blvd. in Pasadena, (626) 673-1865) and can also be purchased at these stores across the region. You can also find out where their truck is on Facebook or Twitter.

This taco stand's Frozato looks like soft serve but is vegan and gluten-free, made with nuts and soy. Go classic with vanilla, chocolate, or swirl on a vegan cone or spring for the whole enchilada (so to speak) by garnishing it all with one of Hugo's vegan gluten-free churro. Not a bad way to follow up a meal of their tacos, tamales or nachos—which can also be made vegan. 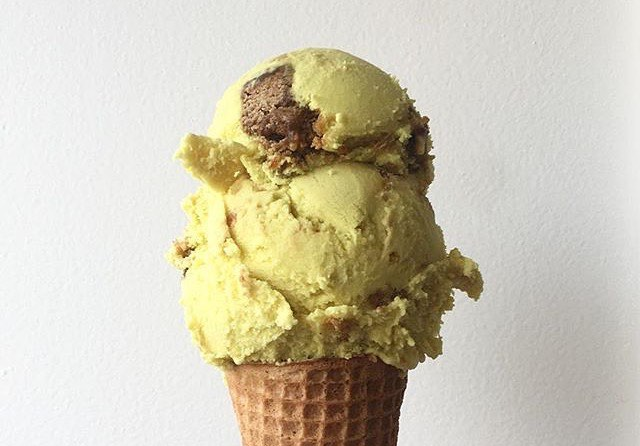 Van Leuween's vegan turmeric ice cream with palm sugar shortbread coffee caramel mini sandwiches. Quite a mouthful in both senses of the term. (via Instagram)

Jessica Hamlin is a journalist, web producer and editor born and raised in the San Fernando Valley. So she’s, like, a bonafide Valley Girl. Jessica formerly worked as an editor for AOL’s hyperlocal news start-up Patch and her work has appeared on KPCC’s website and in LA Downtown News, Pasadena Weekly and Pasadena Magazine. A Kombucha addict passionate about wellness and nutrition, Jessica likes making and discovering tasty and healthy food and started taking pictures of meals back when everyone used film cameras. You can find her work on her website, Twitter and Instagram.