Once A Luxury Department Store, The Bullocks Wilshire Opens For A Public Tour This Month 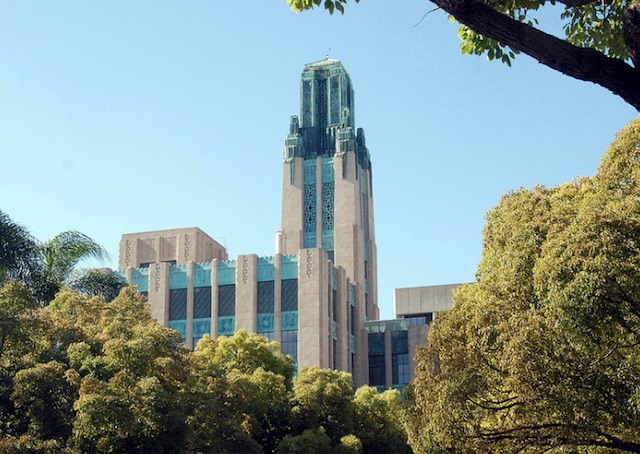 The Bullocks Wilshire building is one you've certainly seen, towering over Wilshire Vermont in all its Art Deco glory. But the last weekend in July is the only time in 2016 that you'll be able to actually go inside, assuming you aren't a law student.

The Bullocks Wilshire building was completed in 1929. At that time, it was a department store owned by John G. Bullock. Bullock's partner, P.G. Winnett, had gone to Paris for the Exposition of Decorative and Modern Arts in Paris in 1925, where he became acquainted with the style of Art Deco. This particular department store was one of the first Art Deco buildings in the U.S., though Los Angeles would, of course, become known for them. Father-and-son architects John and Donald Parkinson designed the building. They also designed L.A. City Hall in 1928, the L.A. Memorial Coliseum in 1923, and Union Station. John died during the design process in 1935, while the station would not open its doors until 1939.

Eleanor LeMaire and Jock Peters of Feil & Paradise Company handled the interior of the department store. In 1926, LeMaire had worked to update one of Bullock's downtown stores. For Bullock's Wilshire, LeMaire and Peters chose to display items in glass cases on wooden stands or on mannequins as opposed to hanging racks, according to Collectors Weekly. They didn't want the racks to obscure views of the space. 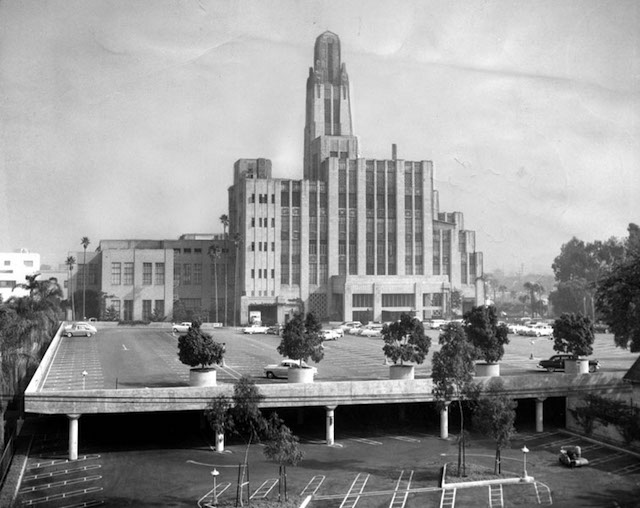 According to The Architecture of Entertainment by author Robert Winter:

Entering, the prospective customer, probably intent on having lunch at the fine restaurant on the fifth floor, would pass a bank of ornate elevators and then go into a great Perfume Hall, lit with tube-shaped Art Deco chandeliers hanging there and in the room to the right. The sportswear department, designed by Jock Peters, featured a large relief sculpture The Spirit of Sports by Gjura Stojano, on one wall. Across the room was a large Art Deco-style clock. Beyond that was the men's clothing shop, fitted out with cornices and door trim reminiscent of Frank Lloyd Wright's concrete-block ornament on his "La Miniatura" in Pasadena. The upper floors were equally elegant, with frescos and other intimations of upper-middle-class luxury, but some more Louis XVI than Art Deco. 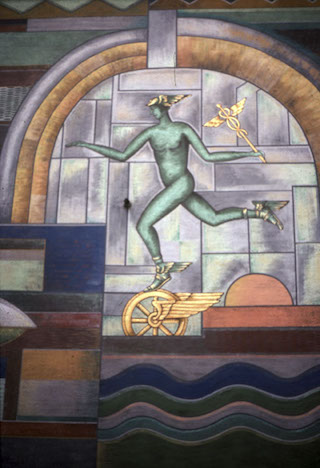 Herman Sachs' "Spirit of Transportation" (Photo courtesy of the Los Angeles Public Library Photo Collection)
Bullock's Wilshire was also one of the first malls to cater to drivers, as its entrance faced not the street, but the parking lot. Valet attendants met guests at the porte-cochere, where gazing upward would earn you a view of artist Herman Sachs' "Spirit of Transportation." The mural features airplanes, the Graf Zeppelin, and Mercury, the Roman messenger god of commerce and travelers. (Or the Greek God Hermes, if you prefer.) In its early days, the tower contained a light that could be seen from quite a ways away. The distinctive green you see today is copper.

When it was built, the store was hailed as a piece of art that would define a generation. Architectural critic Pauline Schindler, wife of the Vienna-born architect Rudolph Schindler, wrote: "The achievement of Bullocks Wilshire is equal to the designing of a great medieval cathedral. Greece built temples, the Middle Ages built cathedrals. But we, whose life lies not in worship but in producing and buying and selling, build great stores."

The who's who of the day were known to frequent the store, including John Wayne, Greta Garbo and Walt Disney. Well before her Murder, She Wrote days, Angela Lansbury worked as a sales clerk there along with her mother. You could have lunch there while enjoying a mid-day fashion show, or nurse a cocktail as you shopped for gifts in private suites. This was a luxurious, elegant exercise in capitalism, to be certain. 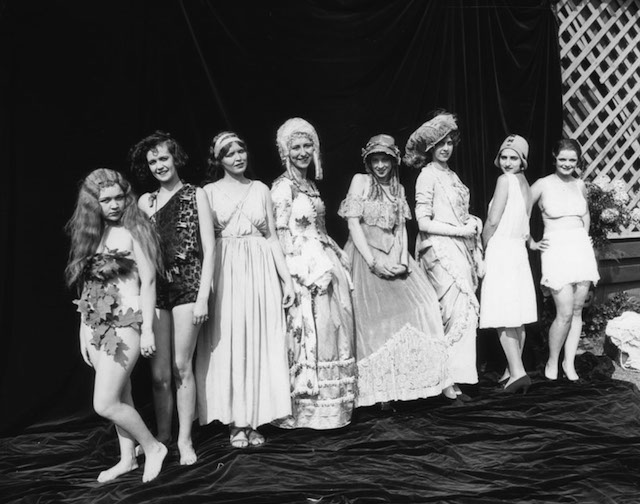 But, like most things, it couldn't last. By the 70s, malls were popping up in the suburbs and the affluent shoppers Bullock's Wilshire had once entertained were spending their cash on the west side of town. The store was sold to Federated Department Stores in the 1980s, then again to Macy's in 1988. The building did become a Los Angeles Historic Cultural monument in 1969, and earned a place in the National Register of Historic Places in 1978. Somewhere along the way, it lost its apostrophe.

Like many landmarks in Los Angeles, it found its way into a number of films. The final scene of Ghostbusters (1984) was filmed, in part, on the building's roof. In 1989, the store was used as the setting for Aerosmith's "Love in an Elevator" video, a heartwarming ballad about the time frontman Steven Tyler had sex with an unidentified woman in a hotel elevator.

On the second day of the L.A. Riots in 1992, the store was broken into by rioters. They smashed out all the display cases, but were unable to reach higher floors as employees running out of the building had turned the elevators off. The store did not have an escalator. Three small fires were intentionally set, but did not cause any significant damage.

The store closed in 1993. In 1994, Southwestern Law School, located next to the store, bought the building. They restored it and adopted it as part of the school. Students now dine in its Tea Room, there's a huge law library taking up about a third of the building, and the Julian C. Dixon Courtroom and Advocacy Center can be found on the first floor.

Unless you are a student at the school, you will find yourself unable to do much more than look at the building's impressive exterior as you head down Wilshire. However, they do offer annual tours, this year's taking place on Saturday, July 30 and Sunday, July 31. On Sunday, guests may take a self-guided tour via one of five, half-hour blocks with start times ranging from 10:30 a.m. to 12:30 p.m. These tickets are $25 and can be purchased here. Parking is free in the school's parking structure.

Or, or Saturday, you may choose to go on a docent-led tour of the building that finishes with either lunch or high tea, depending on which time slot you choose. The menu will aim to replicate dishes from the store's early days. These tickets are $75 and go on sale Tuesday, July 12.

The Bullocks Wilshire building is located at 3050 Wilshire Blvd. in Los Angeles.