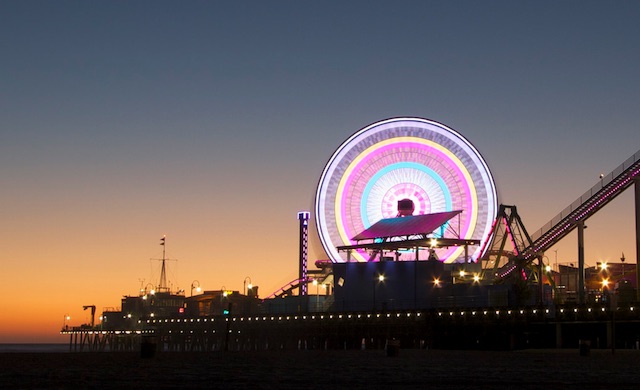 There's a Poliwag around here somewhere. (Photo by steve via the LAist Featured Photos pool on Flickr)

The Santa Monica Pier is one of L.A.'s most indelible landmarks. The manic lights of the ferris wheel. The smell of the ocean. The electronic pings and blips from the arcade games. The cheers emitting from the crowd as someone finally catches Dragonair. Yup, Pokémon Go has already invaded the pier.

Perhaps the players were trying to stock up on water Pokémon. How it works is that (duh) more water-type Pokémon will show up near bodies of H20. So, if you're hot on the trail of a Poliwag, Staryu, or Magikarp, the Pacific Ocean isn't a bad place to look (though we advise that you avoid going in the water).

As we'd noted in our list of "Best Places To Play Pokémon GO In Los Angeles," you can escape the pier if it's too crowded and hit up the sandy beaches or the areas beneath the boardwalk.

It's a gross understatement to say that the game has been a success. It has been so wildly popular, in fact, that stock prices for Nintendo, which owns Pokémon, shot up by 25 % within a week. The game manufacturer had been in a rut for years as it lost ground to Sony (makers of the Playstation) and Microsoft (Xbox). Can Pokémon restore the Nintendo brand to its former glory? It looks like it's already doing so.

This giant mob of people on the Santa Monica pier all celebrated catching a dragonair. #PokemonGO pic.twitter.com/CsAOS2ag3f