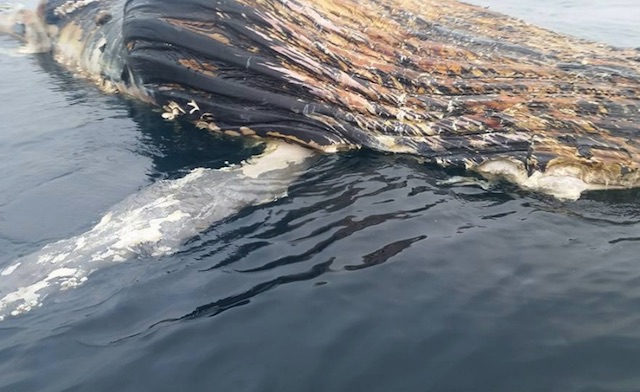 A close-up of Wally. (via Facebook/Keith Poe)

Just before the 4th of July weekend, a deceased humpback whale washed up on the shores of Dockweiler Beach. Lifeguards pondered their options in disposing the rotting, stinking body. Ultimately, they decided to tow the carcass out at high tide and let it float away, where the circle of life would take its course.

Now it looks like those plans have been backfiring. As reported by the OC Register, Wally's body came floating back towards Newport Beach on Sunday, and lifeguards spent the whole day towing it back out to the outer-reaches of sea. Then, thanks to a strong south wind that arrived overnight, Wally came back AGAIN this morning. Lifeguards, undoubtedly used to the situation by now, got on their boat again to haul it back out. Here's a video of them towing Wally out on Sunday.

One of the major concerns is that the stink will attract some hungry opportunists—namely sharks— to the shore. And certainly we've had our fair share of shark sightings already, so it's especially important to get Wally as far away from land as possible.

In fact, Wally has already had her share of encounters with Jaws. Keith Poe of sharktagger.com went out to the carcass on Wednesday to see if there were sharks swimming around. According to Grind TV, over the course of two days Poe counted seven sharks, with the largest one measuring 18 feet. Some of them even attacked his boat. "I saw the teeth marks and was blown away. It scared the hell out of me," Poe told Grind TV. Poe has images of Wally—and a video of the teeth marks left on his boat by a shark—on his Facebook page. Here's another close-up image of Wally: 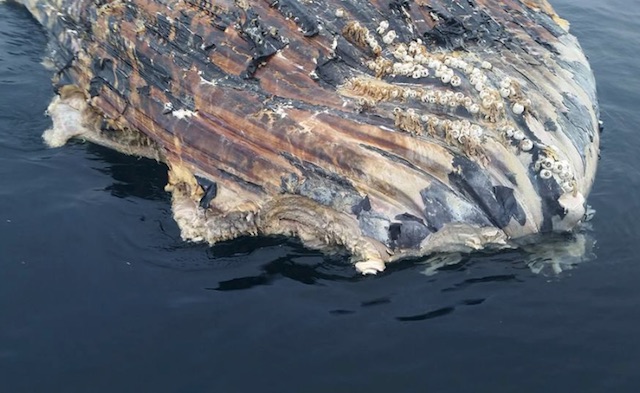 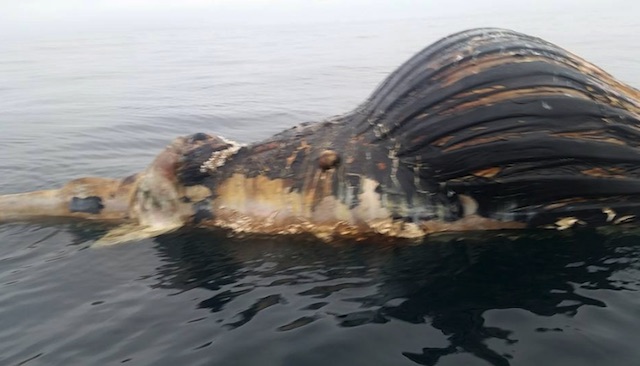 And here's one showing the shark's teeth marks:

That left a dent. (via Facebook/Keith Poe)

Wally, we should note, isn't just a run-of-the-mill humpback whale. She had been tracked by scientists for years along the Orange County coastline. Initially experts thought that Wally was a male, hence the name, but later realized that he was a she—contrary to what photos of her corpse would suggest. ("It turns out that was part of the vaginal wall protruding through the genital slit," a NOAA Fisheries spokesperson told the L.A. Times.) Last summer we reported on an amazing video of Wally (seemingly) shooting a rainbow out of blowhole. It was a magical sight to behold.

We miss you Wally. Though, for real, you gotta take your bloated, decaying corpse somewhere else. You remember how they got rid of the The Blob? Maybe we should try that.