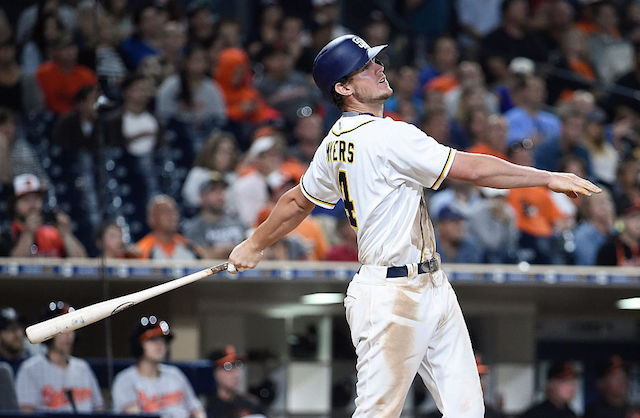 It's baseball's All-Star Break, and they could not have chosen a more ideal place for fans and players alike to relax. This year, San Diego plays host to the Home Run Derby and the All-Star Game, meaning picturesque Petco Park serves as the backdrop while you slam some local beers in the warm sun with a plate of tacos at your side.

Wil Myers, one of two representatives for the San Diego Padres (they're really bad this year) in the All-Star Game, might opt for a ballpark frank instead. At a media event hours ahead of the Home Run Derby, Myers dropped this extremely picante take:

Wil, what are you doing bro? The Padres are having a hard enough time bringing their fans to the park. Are you trying to alienate literally everybody within San Diego County?

To be fair to Wil (and we're giving him plenty of leeway here after that bombshell-of-a-bad-opinion), he grew up in North Carolina and his path in professional baseball before the Padres never brought him anywhere close to California. And since he's having such a good season so far, maybe he hasn't had the time to hit up any taco trucks in the area?

Of course, this spread like wildfire across Baseball Twitter, which could never unanimously agree on anything before this:

Would you take Mexican food recommendations from this man? pic.twitter.com/DtQYj4jjOz

I wonder what other #HotTakes Wil Myers might have?

“The best beaches in America are in Kansas City.” - Will Myers, San Diego resident

Wil Myers: "It ain't real guacamole if it don't got no peas."

TACO SHOP LADY: Hot sauce?
WIL MYERS: No thanks, I have a bottle of lukewarm ranch dressing in my fanny pack.

"The best barbecue is in eastern Illinois" -Wil Myers, probably

The 2016 Home Run Derby is tonight and Wil Myers is one of the contestants. I hope he loses.