Congress Wants To Make A National Monument For The St. Francis Dam Disaster 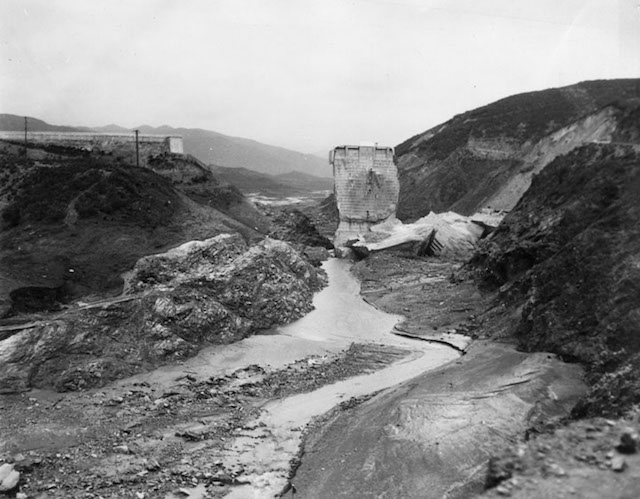 St. Francis Dam in San Francisquito Canyon near Saugus was completed in 1926 and failed in 1928. It was part of the Owens Valley Aqueduct System. This post-failure photograph shows the stream of remaining water coming down from the dam. Only one center piece of the wall remains standing, both ends having been washed away. (Photo via Los Angeles Public Library Photo Collection)

Nearly a century after the 1928 St. Francis dam disaster— the second largest loss of life in California history, after the 1906 San Francisco earthquake—the U.S. House of Representatives voted unanimously to establish a national memorial and monument in honor of the hundreds of victims of the catastrophe. Congressman Steve Knight (R-Palmdale) authored the bill, and the Daily News reports that similar legislation may soon be introduced in the Senate. The memorial would be funded by private donations and would establish a 440-acre national monument administered by the National Park Service.

The catastrophic failure of the St. Francis Dam is considered by many to be the worst American civil engineering failure in the twentieth century. Located roughly 40 miles northwest of downtown and a few miles from where Magic Mountain now stands, the dam was built to store water (roughly a two year supply) for the booming city of Los Angeles. Spearheaded by legendary Los Angeles water czar William Mulholland and constructed between 1924 and 1926, the dam was to be an integral part of the Los Angeles Aqueduct system; instead, its failure decimated whole towns and demolished 1,200 homes, ultimately leading to the deaths of approximately 435 individuals. Though physically unhurt, Mulholland, who bore the brunt of the responsibility for the disaster, psychologically never recovered.

The dam, which was built to hold 12 billion gallons of water, stood nearly 200 feet tall, 700 feet long and covered 600 acres, according to Smithsonian Magazine. 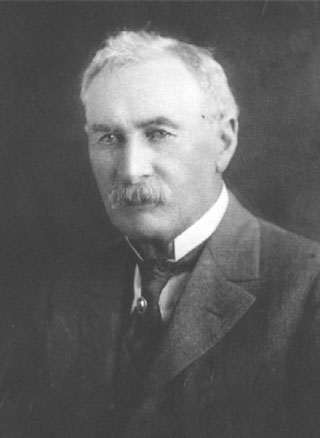 William Mulholland (Photo via Wikimedia Commons)
The dam is said to have leaked since it opened in 1926, but the trouble really began early on the morning of March 12, 1928, when dam keeper Tony Harnischfeger discovered a rather significant leak during a routine daily inspection of the dam. Mulholland arrived at the site by 10:30 a.m. that morning, but after further inspections he found nothing out of the ordinary, and pronounced the dam safe, at least for the time being. Unconcerned, he and his deputy Harvey Van Norman returned to Los Angeles, ate a late lunch, and went on with their day. A little more than twelve hours later, disaster would strike.

It was a few minutes before midnight on the windy night of the 12th when the dam gave way, unleashing a ten-story high avalanche of water that would violently destroy nearly everything in its wake for the next five-and-a-half hours, not stopping until it reached the Pacific Ocean just before daybreak. Harnischfeger, his girlfriend and their six-year-old son are believed to have been the first to perish. According to the Smithsonian, there are no first-hand accounts of the dam breaking; "anyone who did see it would presumably have been killed instantly." Residents of neighboring communities initially mistook the shaking for an earthquake, as the flood swept 6 miles down San Francisquito Canyon before reaching the much larger Santa Clara River, where it then turned through Castaic Junction, swept through the Santa Clarita River valley, and careeened through a Southern California Edison construction camp and drowning 84 of the 140 workers asleep before rampaging through Ventura County. By 1:09 a.m., the reservoir was essentially empty, unleashed further afield. Bodies would eventually be recovered from the ocean as far south as San Diego. 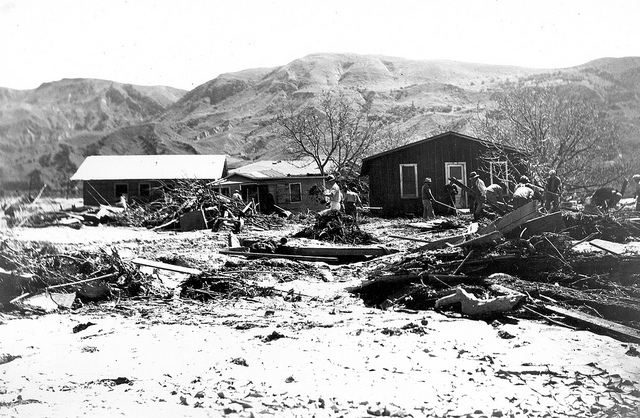 Houses piled against each other in the days after the flood as clean up crews are at work. (Photo via the U.S. Geological Survey)

As civic historian Laura Bliss wrote in CityLab last year, "there's been curiously little done on the part of Los Angeles County, or the city, or the LADWP, to memorialize the victims" over the years:


Except for some blocks of concrete and rebar and the scars of waterlines etched into the canyonside, there is no indication that the dam once massively stood there. There is a small, weathered plaque at a LADWP power station a little ways down the road, which designates the dam site as a California Historical Landmark, but you have to know where to look for it. There is no official memorial park. No major museum exhibits. No field trips for elementary schoolers. There have been songs about the disaster, but you've never heard them the way you've heard "Mrs. O'Leary's Cow." In one day, hundreds of people died for the water that gave the rest of the city life, yet they have no place in the collective memory of Los Angeles.

"Things have been swept under rug for so long," Alan Pollack, president of the Santa Clarita Historical Society, told Bliss. "It’s time to properly memorialize the victims properly." Pollack and his colleagues at the historical society have worked with Knight on the campaign for the memorial.

And what of William Mulholland, who was, in many ways, the father of our city as we know it today? He was cleared of any criminal wrongdoing, but remained forever haunted by the largest unnatural disaster in California history. The man once known as "The Chief" resigned in disgrace a few months after the dam failed, retiring into seclusion until his death in 1935. "Don't blame anyone else," he said. "Whatever fault there was on the job, put it on me."

"I envy the dead," he famously said at the coroners' inquest, as he watched grainy footage of the disaster through tears.