Some Jerks Claimed L.A. Is One Of The Rudest Cities 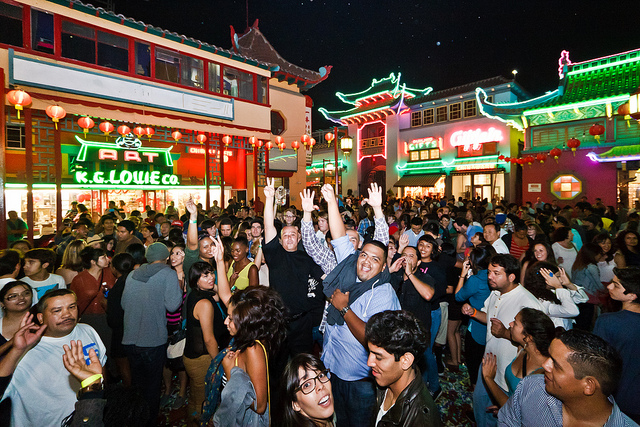 Come on, we're totally friendly. Just look at us! (Photo by Marc Evans via the LAist Featured Photos pool on Flickr)

Whenever one of these ranking-U.S.-cities things pop up, it seems like L.A. is always getting the short end of the stick. Just last month L.A. was ranked 193rd in Allstate's list of "America's Best Drivers." Now, after being mocked for our driving, we're being bashed for our sense of etiquette.

Travel + Leisure released this year's ranking of "America's Rudest Cities" and appointed the City of Angels to the 4th spot. "Despite sunny skies and palm tree-fringed boulevards, Los Angeles still has a reputation for being a bit unfriendly," says the magazine. Though it backtracked a little and gave us props for our food: "It's hard to be rude to anyone while enjoying a bowl of banchan in Koreatown." This also goes to show that Travel + Leisure doesn't really understand Korean food either. We're just saying— maybe Travel + Leisure could have done a bit more homework?

As for who's ruder than L.A., the magazine says that New York City and Phoenix score higher. Miami took the top spot because of "a pretty high snob score."

This is not the only time that the magazine has pegged us as being total d-bags. In their 2015 ranking of "World's Unfriendliest Cities," L.A. came in 5th globally. We were bested by the likes of Moscow and Marseilles—basically, cities with high concentrations of Bond villains, who are undoubtedly rude.

Our friends at Gothamist are similarly tickled/rankled that their little town has made the rude list: "[I]n New York, someone might be rude to you if you start a hotel fire or take up both sides of the escalator, but for the most part, people will treat you with respect." They also expressed surprise that Boston only came in at 7th, which, we have to admit, is a sentiment we share.

Travel + Leisure does have some good things to say about L.A. We were ranked number 4 in their list of America's "Most Attractive." According to the magazine: "Looking camera-ready is always important in this celebrity-dotted city." So we're vain and rude, but we're also smoking hot. We'll take it!

Anyway, here's proof that, while we're not always the most amiable city, we'll pull you out of a burning car when the time calls for it.