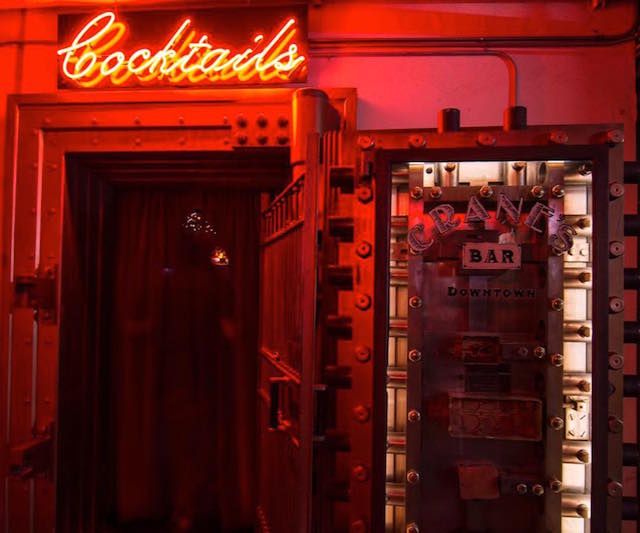 Getting a parking ticket, plainly, sucks. But one downtown Los Angeles bar is trying to soothe the burn by offering parking offenders a half-off bucket of beer.

Crane's Downtown is a fun, no-frills bar, as it can be found by entering a cool, subterranean bank vault. They will give you half-off a bucket of beers—bringing the price from $20 to $10—if you bring them a parking ticket received any time within 7 days of your visit. Parking tickets are the only type of ticket they will honor.

"We're not promoting other tickets because we're not promoting bad driving," owner Darren Crane tells LAist. "We're promoting something that every innocent person gets caught up in. Somebody asked, 'I got a texting ticket the other day, do I qualify?' And we said no. You shouldn't be texting and driving."

Crane says he has noticed people getting parking tickets for things he considers minor, such as trying to unload their belongings into their new apartment without a commercial license. Another thing Crane despises is the part where people who already have to deal with getting their cars towed also get hit with a ticket. But, he also thinks that when you're with a pal and you return to see a fresh parking ticket slapped on their windshield, you're secretly glad it's them and not you.

Each bucket will contain five, cold session ales—think Bud Lite, Modello and the like, not your high ABV craft beers. Crane's also does happy hour Monday through Friday from 5 p.m. to 8 p.m., and Saturday and Sunday from 2 p.m. to 6 p.m. During this time, you can choose a select draft for full-price and get a refill for a buck, or a well drink for $8 and then a second one for $2. (No splitting that deal with a friend.) And though Crane is a Long Beach native, he'll give you happy hour all day on game days if you wear his favorite football team's jersey: the Pittsburgh Steelers.

Of course, we'd recommend parking your car somewhere legal before taking the Metro, a rideshare or your own two feet to Crane's. Safety first!