New Security Lines At LAX Could Cut Wait Times By 30% 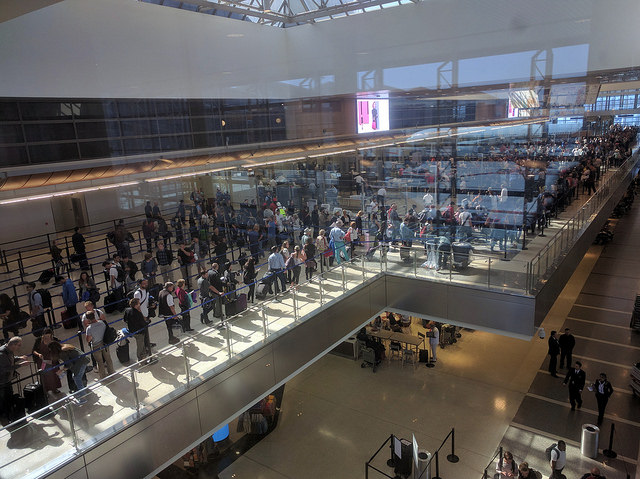 (Photo by Cory Doctorow via the Creative Commons on Flickr)

The funny awful thing about airports is that, while commuters may feel rushed and harried, they also spend a lot of time waiting around. Whether they're waiting at a security checkpoint, or waiting for their plane to park, there's a lot of time spent in limbo.

But now it looks like there may be some relief on the horizon. As reported by the L.A. Times, the TSA has teamed up with American Airlines to test out new security checkpoint lanes that will (possibly) slash wait times by 30 percent.

Delta Air Lines installed similar checkpoints at Hartsfield-Jackson Atlanta International Airport in May. "There's no question that they've made things faster," Reese McCranie, director of policy and communications at Hartsfield-Jackson, told LAist. He says that the checkpoints have been so effective, in fact, that the airport is thinking about installing more of them. "The next phase is to see how we can scale it across other checkpoints," said McCranie.

According to the Times, the lanes will also be designed to allow passengers to keep moving even if someone is holding up the line. McCranie said that the new Hartsfield-Jackson checkpoints have a separate conveyor belt for items that need further screening. So, if a bag passes through the x-ray machine and a TSA agent spots something noteworthy, the agent can send that bag to a separate belt that will carry the item to a zone designated for inspection. This allows everyone else in the line to keep moving.

LAX's new checkpoints are expected to arrive in the fall. According to McCranie, Atlanta was the first U.S city to get these types of checkpoints. They have also been implemented at Amsterdam Airport Schiphol and Heathrow Airport in London.

So it looks like we may see shorter wait times in the future. In the meantime, you'll have to just tough it out:

In Los Angeles, everything is congested. @tsa #ihatethewait

I got just enough sleep to function getting through the airport at 330 am. Hopefully I can sleep the whole plane ride back to nyc #zzzzz #laxairport