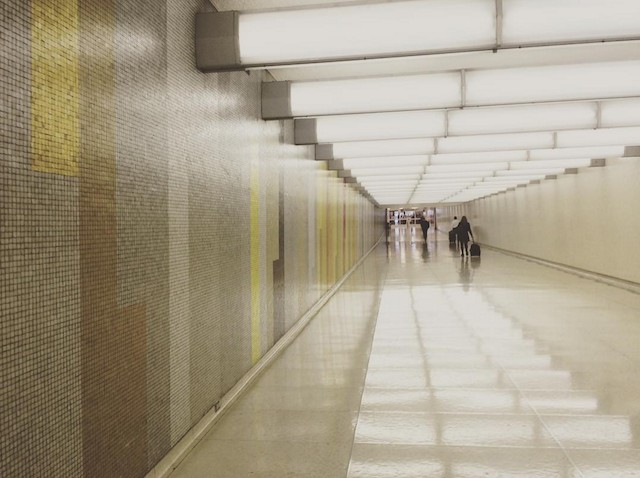 There are long, stark white walls that line some of LAX's hallways, giving the passenger a feeling of being trapped in a never-ending portal, but in some terminals a solution to this passageway purgatory was put in place decades ago. In the 1950s, as an effort to bring the airport into "the jet age," interior designer and graphic artist Charles D. Kratka created tile mosaics in seven tunnels around the airport, which were installed in 1961—today three remain opened to the public, and they are the best part of LAX. They've even been the inspiration for... socks, which may seem unspectacular, but you certainly don't see any Newark Airport socks out there.

While most of these tunnels were closed off for security purposes following 9/11, Terminals 3 and 4 remained open, and more recently the colorful Terminal 6 tunnel reopened.

Upon Kratka's death in 2007, the L.A. Times noted that the work was done to help make the 300-foot long tunnels appear shorter. Ethel Pattison, the airport's historian, told the paper, "He was a grand artist, way ahead of his time. His approach to the walls was novel and gave passengers something of interest to look at."

While Kratka reportedly told his daughter the color schemes used were meant to reflect changing seasons, the official word now seems to be that they represent a trip across the country, from ocean to heartland, which is reinforced by tour guides—here's a short video from Alison Martino:

The conflicting stories may be rooted in a little reported on controversy: Kratka may not have designed the mosaics. While he is widely credited with creating them, it's possible they were really designed by Janet Bennett—Kratka was her immediate supervisor. Bennett has spoken about not being credited in the past—via Live Your Colors blog:

"When I found out about the obituary for him in the L.A. Times which said that Charles Kratka was the designer of the LAX murals, I freaked out." By her own admission, she'd never claimed credit for the murals which were installed in 1961, when she was working for the architectural firm of Pereira & Luckman.

She says when she contacted the airport about this, they ask for documentation proving she was behind the design—"Anytime I try to follow up, they say, 'can you document it?' It was so many years ago..." Bennett says her concept was to bring the viewer from "from ocean to ocean," which is what tour guides go by, not the seasonal idea Kratka offered.

We've reached out to LAX for comment on this, and will update when we hear back.

While Terminal 4 offers the moving sidewalk along the wall, which has been featured in both movies and television, the others are equally stunning, particularly with the horizontal lights that run above you.