Coyote Shot Dead On The Mean Streets Of Silver Lake 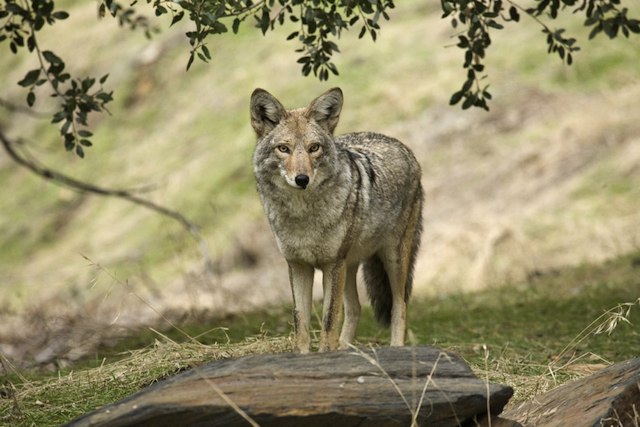 Where you from? via Shutterstock

Last month, an unknown assailant shot and killed a coyote on Fernwood Avenue in Silver Lake. As the L.A. Times reports, a Silver Laker named Mike Parson discovered the coyote in street just in front of his parked truck early on a gloomy June morning.

This particular incident is just one of increasingly common encounters between coyotes and people in urbanized Los Angeles. Where coyotes were once intimidated by living in the built-up city, and stuck instead to the hills, the animals have grown so comfortable living alongside humans that they are now reproducing successfully in the urban biome.

The Silver Lake shooting is being investigated by the LAPD, the Animal Cruelty Task Force, as well as the L.A. Department of Animal Services, though none of the three agencies seem to have much information on what may have prompted the shooting.

But in May, employees of the L.A. County Department of Agriculture were forced to shoot and kill five "aggressive" coyotes on the Palos Verdes peninsula, according to the Daily Breeze. As a spokesperson for the government agency said at the time, "all five animals posed a threat to humans."

As far as actually studying the urban coyote phenomena, the research is all very present tense. In early May, the National Parks Service made a request for folks who would be willing to get their hands dirty and collect coyote scat found throughout the urban areas. Though the diet of the city-dwelling 'yotes is presumed to differ from that of their more rural cousins, the diets of the urban 'yotes has never been significantly studied.

Coyote attacks on humans are also relatively rare. Per the L.A. County Department of Public Health, there were 15 coyote attacks on humans increased in 2015. A rumored attack on Kim Gordon at the Silver Lake Whole Foods (365, whatever) turned out to be false, the mere digital runoff of one of L.A.'s finest Instagram accounts, @wholefoodssilverlake.

“The coyote is going to try to expend the least amount of energy to get the maximum amount of food,” said Niamh Quinn, a specialist in human-wildlife conflict for the University of California Division of Agriculture and Natural Resources. “Why would you stay in a more rural area where you have to go catch a rabbit when you can stick your head in a garbage can and get the same nourishment?”

I ask myself the same question every day.