Videos: The Denny's Windmill In Arcadia Is Spinning Again 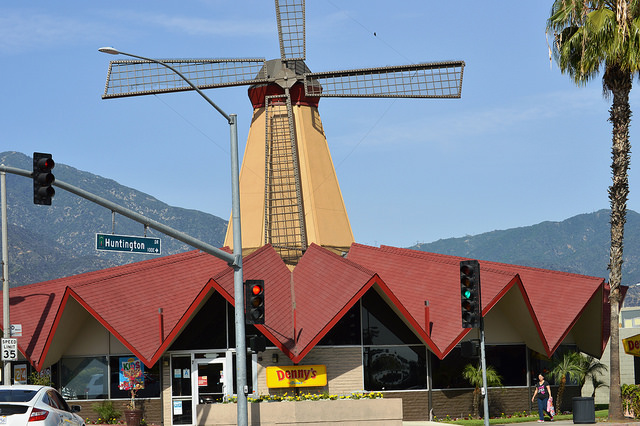 We suddenly want a Moons Over My Hammy. (Photo by California to Chicago via the Creative Commons on Flickr)

You may have passed by it if you've ever hung out at Santa Anita Park, or if you decided to hit up the Monrovia Sonic's at 1 a.m. We're talking about that windmill that sits on top of a Denny's on Huntington Drive. It looks like a big aberration—a piece of Holland transported to the San Gabriel Valley.

The windmill used to be part of a Van De Kamp bakery building that was completed in 1967, reports the Pasadena Star-News. The bakery closed, and Denny's later moved in as its new occupant in 1989. When owners of the Denny's said they wanted to tear down the windmill in 1999, locals voiced their outrage and saved the structure from demolition, according to the Los Angeles Conservancy.

While the windmill avoided a tragic end, the fact remained that it had stopped spinning ever since Denny's purchased it. It was immobile—nothing more than a big ornament. That changed this Wednesday, however, when Denny's and Arcadia officials got the windmill to start spinning again. According to the Pasadena Star-News, about 50 people came out to see (and celebrate) the resurrection of their beloved windmill.

Denny's had spent $100,000 (!) to get the windmill in running condition again. The renovations included adding a new motor and reinforced blades. And, oh yeah, there are LED lights now, so the windmill will light up at night.

Stores for Van De Kamp's Holland Dutch Bakeries used to dot the southland. The bakery-slash-coffeehouses are long gone, but you may have seen the Van De Kamp brand in the bread aisle at Ralphs. The Arcadia windmill, designed by Pasadena architects Harold Bissner and Harold Zook, was the first one to be erected on top of a Van De Kamp's. Later, 14 more would sprout up at other locations. The Arcadia windmill is the last one remaining.

Watch the windmill in action:

While in Arcadia I had to stop by to see that "It Spins Again!" #arcadia #dennys #route66 #windmill #summernights #vanderkampdutch #itspinsagain #olloclip