Costumed Hollywood Performers Will Soon Be Subject To New Rules 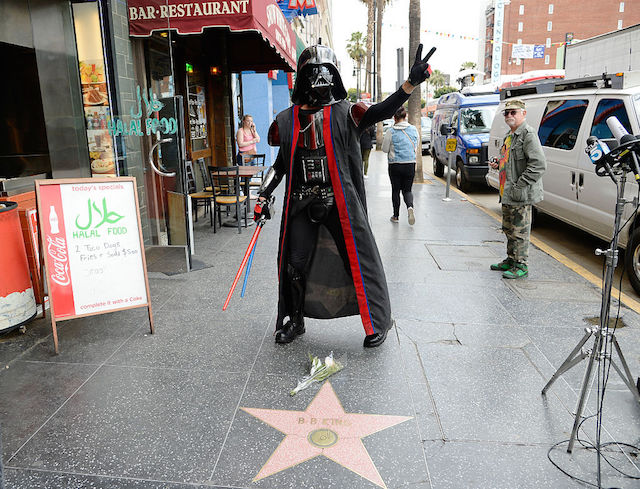 Where else in the world but Hollywood Boulevard can costumed superheroes, posing white-dressed Marilyns, breakdancers and magicians be found in such close proximity, let alone concentration? Okay, maybe Times Square, but it's clearly the poor man's version of Hollywood Boulevard. Anyway, Hollywood's street performers are certainly a tourist draw, but they are also seen as a nuisance by business owners and city officials, who worry that the chaos might end up hindering—and not helping—tourism in the area. The Los Angeles City Council voted Wednesday to create a so-called "Hollywood Entertainment Zone" that would regulate performers and vendors on both sides of Hollywood Boulevard between Highland Avenue and Orange Drive. The proposed ordinance was authored by Councilman Mitch O'Farrell (CD 13), who represents much of Hollywood. New York City put similar legislation into motion for Times Square earlier this year.

The "Hollywood Entertainment Zone" motion, which has now been sent to the City Attorney for official drafting, would regulate performers and vendors in the area, allowing 20 passes a day to be issued and barring anyone else from from engaging in regulated activities (performing, soliciting donations, handing out free food, using amplified sound or requiring equipment to be set down on the sidewalk) in the zone without a twenty-four hour pass. The daily passes would be available on a first-come, first-serve basis, with ten for the north side of the street and ten for the south. Violators would be barred from the pass system for three months after their second offense.

The L.A. Times reports that business advocates complained that the section of the Boulevard in question "had become a chaotic hunting ground for aggressive hawkers preying on out-of-towners," at a City Hall hearing earlier this year.

“Imagine if this was your business and your clientele was families,” Hard Rock Cafe manager Enrique Ramirez told the Times. “We don’t want to be associated with that … People just come here to enjoy Hollywood as it is, not get pestered.”

"The number of visitors in this area of Hollywood and the amount o f activity taking place there create unique challenges for public safety," Councilman O'Farrell said in a statement, and proponents of the zone complain that street performers (and the crowds they attract) block portions of the already congested sidewalks, forcing pedestrians to walk in the street. Hollywood Boulevard is one of the most trafficked sections of the city—according to Los Angeles Tourism and Convention Bureau statistics, Hollywood received over 6 million individual visitors in 2013 alone, and the vast majority of them likely made their way down the bustling Boulevard.

Visitors, as a report on the proposed ordinance from the LAPD put it, "are intrigued and entertained with the many activities and performances that can be found on Hollywood Boulevard," but many find the whole thing to be, well, a little much, which the city and the Hollywood Chamber of Commerce fear could turn off tourists, and their almighty dollars. Per the report, 74 percent of those 6 million visitors were approached by solicitors, and 20 percent of them found the experience to be "unsatisfactory" (“'Aggressive and rude' was the most commonly reported cause of the unsatisfactory experience").

The only thing that's still cool about this stretch of Hollywood Blvd is being heckled & swindled by the characters https://t.co/kYz8lrfj02

The public safety report, which the LAPD completed with assistance from the City Attorney’s Office, the Bureau of Street Services, and the Tourism and Convention Board, enumerated on the problems alleged caused by the street performers:


Various characters in costumes and street performers are often involved in incidents of theft and extortion. Tourists feel that they are being pressured to buy novelty items they don’t want. Sidewalk street merchants seek donations from tourists with photo opportunities. Loud music or speakers are used for free style hip hop dancing, speeches or other First Amendment protected acts. These occurrences draw in a large crowd and are often complained about by restaurant patrons and neighboring apartment tenants.

We are just going to keep quoting this report, because it is better than anything we could write:


Over the past two years, several high profile arrests were made in relation to the street performers in this block. In 2015 characters “Mickey Mouse” and “Donald Duck” were involved in a mutual fist fight outside of the Dolby Theater while in their costumes. Both were arrested and filed on for battery. In the same year, “Mr. Incredible” was punching “Batgirl” in the face while standing in front of the Chinese Theater. The incident was captured on cellular phone video and posted on YouTube. The suspect was filed upon and convicted for the battery charge. Recently, a male Chinese tourist was taking a photo with a female character who dressed as a pirate for the agreed price of twenty dollars. When the tourist handed her a one-hundred dollar bill, the pirate took the money and refused to provide him with change back. As a result, police were summoned to the scene and the suspect was arrested for theft via Private Person Arrest method. This case is pending court hearing.

According to the Tourism Bureau, international visitors make up more than a third of the total number of tourists coming to Hollywood, and they are also the group most likely to be targeted by solicitors.

As with any motion approved by City Council, the actual text of the ordinance will still have to be drafted by the City Attorney, who will then send it back to council for final approval before it becomes law.

LAist spoke with Frank Mateljan, a spokesman for the City Attorney's office, about what the ordinance could look like. Mateljan said that his office takes their direction from council on policy, and that "the set of circumstances [for this potential ordinance] are definitely unique to Hollywood." According to Mateljan, nothing directly analogous to the Hollywood Entertainment Zone currently exists in the city, though there are some permitting restrictions for performers on the Venice boardwalk.

We only hope the new regulations don't kill the heart and soul of Hollyweird, in all its hustling glory.