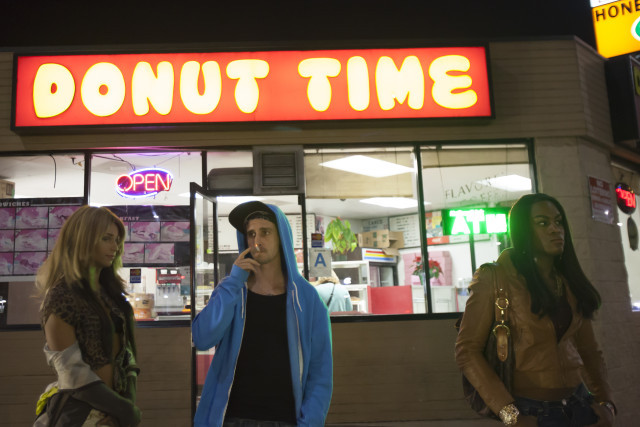 Donut Time, the notorious, beloved twenty-four hour eatery on the corner of Santa Monica Boulevard and Highland Avenue immortalized in Tangerine, has closed its doors. Located in a small triangular building in a no-name Hollywood strip mall, Donut Time has long been home to a vibrant community of trans women.

LA Weekly , who describe Donut Time as a "a haven for sex workers—many of them transgender women—who make a living on the streets nearby," reports that the eatery's doors have been locked and windows boarded, and that Joey Much, whose aunt Seang Mak owns the shop, confirmed that the purveyor of sugary treats has shuttered for good.

"Donut Time for me is kind of a landmark," Tangerine director Sean Baker says in the video below. Baker's 2015 film, an indie darling that premiered at Sundance to much acclaim, was shot entirely on iPhones, with much of the action happening at Donut Time.

According to Los Angeles Magazine, the film's budget didn't permit for the shop to close during shooting, so real customers flowed in and out during the two-and-a-half nights of filming.

Though it's not yet clear what exactly will be replacing Donut Time, the closure may have something to do with the massive mixed-use development coming to the area courtesy of AvalonBay Communities, who have already spent nearly $100 million to buy a large area of land at Santa Monica and Las Palmas, according to the Los Angeles Business Journal.

The gentrification tide has been churning through the still-sort-of-gritty neighborhood surrounding Donut Time for a while now. Regen Projects, a major gallery that represents art world giants like Matthew Barney, opened its current location a block away from Donut Time in 2012. Last year, Curbed LA dubbed the area the "Donut Time District," and reported that AvalonBay had plans to spend another $375 million for a six-acre megadevelopment in the area that would be "large enough, it hopes, to be its own safe haven and even a catalyst for gentrification in the area," according to AvalonBay. Well, I guess we all have our own definition of a safe haven.

Actor James Ransone, who played one of the leads in Tangerine, spoke to LAist about the closure. "The nostalgia for a place that most people of a certain economic class won't patronize seems bizarre to me," Ransone said. "Gentrification is merely a byproduct of capitalism and population growth. If one really wants to prevent places like Donut Time from closing, then we need an entirely new economic system, but if you like the economic system and still want places like Donut Time to exist, then pull out."

Related:
'Tangerine' Director Explains Why He Shot His Movie Entirely On iPhones