15 Places To See Fireworks On The Fourth Of July 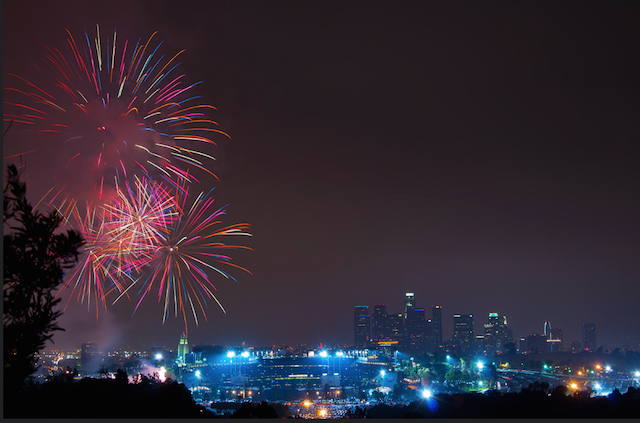 Looking to take the family to a fireworks spectacular on the Fourth of July? L.A. and Orange County have plenty, from oceanside displays to day-long celebrations.

Grand Park is hosting a 4th of July block party with music, food and fireworks from 2 p.m. to 9:30 p.m. The event will be hosted by Mario Hernandez and Kristin Rand with performances from Kotolan, Dexter Story, Jenny O., Afro Funke and La Junta. There will also be an area for children, as well as games like soccer and tag. While outside food is allowed, no outside beverages will be permitted. There will be food vendors on site, but this event is alcohol-free. Free.

Chicago is playing the Hollywood Bowl on the 4th of July, as well as the 2nd and 3rd, at 7:30 p.m. Other guests include Thomas Wilkins, the U.S. Air Force Band of the Golden West, the Hollywood Bowl Orchestra and the L.A. Phil. There will be patriotic music and fireworks. Remaining tickets range from $14.50 to $200.

The Hollywood Bowl is located at 2301 Highland Ave. in Hollywood.

Marina Del Rey will host their annual fireworks display, during which they shoot the fireworks from a barge, at 9 p.m., which you might watch from the beach or a nearby waterfront eatery. The city suggests watching from Fisherman's Village (13755 Fiji Way); Burton Chace Park (13650 Mindanao Way); or Marina Beach (4101 Admiralty Way). Parking in the area ranges from $7 to $15, and it's recommended you arrive early as spots fill up quickly. 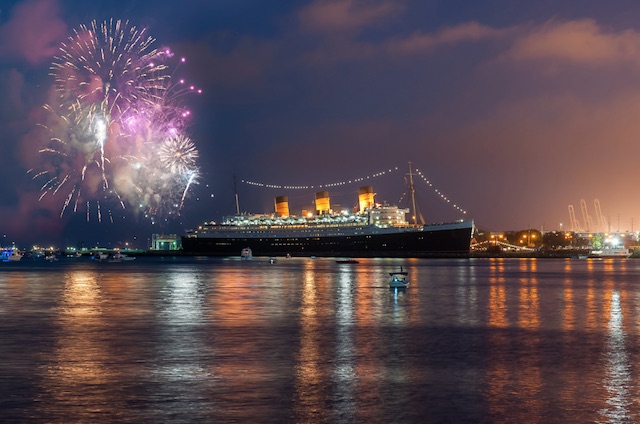 The ocean liner is hosting an all-day patriotic festival that includes a Coney Island-inspired carnival and circus, country music, line dancing, casino games, dueling pianos, a New Orleans matching band, DJs, hula dancing and fireworks. It kicks off at 2 p.m., and tickets range from $44 to $99.

The Queen Mary is located at 1126 Queens Hwy in Long Beach.

From noon to 10 p.m., guests can enjoy a day-long celebration at The Park at the Coliseum. Activities include live music, food, games, carnival rides and fireworks. Free.

The Park at The L.A. Coliseum is located at 3911 S. Figueroa Street in Los Angeles.

Dueling pianos group The Kings of 88 and soul and Motown act Stone Soul will play on the 4th at Burbank's Starlight Bowl. There will also be fireworks. Show starts at 6:30 p.m., tickets are $15 to 140. See more info about the event here. 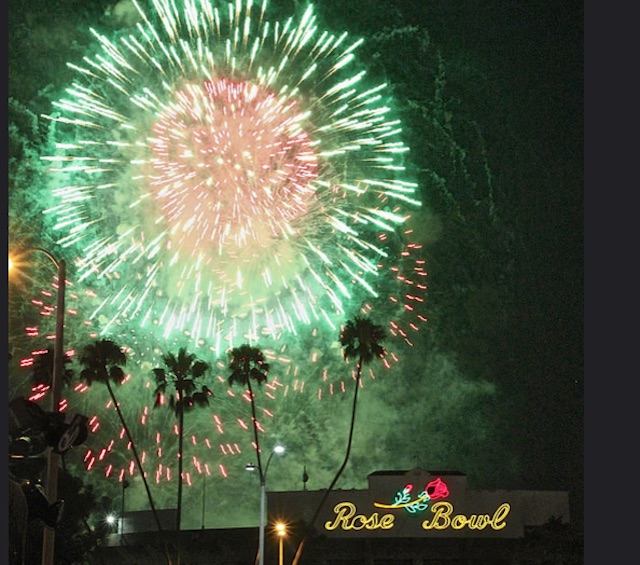 America Fest at the Rose Bowl

The Rose Bowl is presenting AmericaFest, which kicks off at 2 p.m. There will be food vendors and games for children in the early afternoon, and the evening will consist of freestyle motocross, a performance of the National Anthem from Pasadena Symphony's JPL Chorus, NASA Live from Mission Control, and a fireworks show. There will also be a performance from a Beatles tribute band, which is pretty funny when you think about it. Tickets are $13-25.

The Rose Bowl is located at 1001 Rose Bowl Dr. in Pasadena.

Studio City's 4th of July fest will take place at the CBS Studio Center. They're going for a luau theme with magic shows, live music, BBQ, fireworks, an Elvis tribute band, and apparently pirates and mermaids. Tickets are $25 to $125.

The 68th Annual Pacific Palisades Fourth of the July Parade kicks off with skydivers at 1:50 p.m., and then the parade at 2 p.m. This is followed by a family-friendly concert at Palisades Charter High School's Stadium by the Sea at 6:30 p.m. and fireworks at 9 p.m. The parade is free, while the concert is $10. VIP upgrades for both are available here.

Culver City's fireworks will take place at West L.A. College. There will be carnival games, food trucks, a raffle and live music from Teresa James & the Rhythm Tramps. Gates open at 4 p.m., with fireworks at dusk. Pets (save service animals) and alcohol are not allowed on site. Suggested $5 donation, parking is $10. More info here. 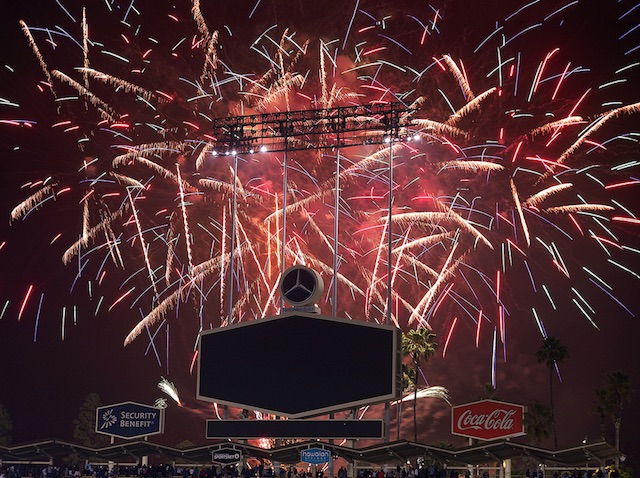 The Dodgers play the Orioles at 6:10 p.m., with fireworks to occur after the game. There will also be a performance from L.A. Zoo's bald eagles Chinook and Anami before the game.

On July 3, Cinespia will present Grease followed by a fireworks spectacular at Hollywood Forever Cemetery. And if you're free on July 2, they'll be showing Purple Rain. Tickets are $16.

Hollywood Forever is located at 6000 Santa Monica Blvd. in Hollywood.

If you head up to Ojai, you can catch their annual parade at 10 a.m. There will also be a concert honoring American music at Nordhoff High followed by a fireworks show. $10 for adults, $5 for children. Discounted family passes are available.

Let's be real, Pomona's annual Kaboom! is by far the most 'Merican of the bunch. They've got monster trucks, they've got Moto X EXTREME, they've got fireworks, and they're gonna shoot a human being out of a cannon. Also, what's more American than a buffet, huh? This one has salad, potatoes, BBQ chicken, carved beef, dinner rolls and mini-desserts. Gates open at 5 p.m., and tickets range from $17.50 to $25, with buffet access an additional $28 to $58. Parking is $10.

The Pomona Fairplex is located at 1101 W McKinley Ave., Pomona.

This year's events include a pancake breakfast form 7 a.m. to 11 a.m., a 5k from 7 a.m. to noon, and fireworks at 9 p.m. There is also a three-day festival at the pier plaza with food, live entertainment, and family-friendly activities.