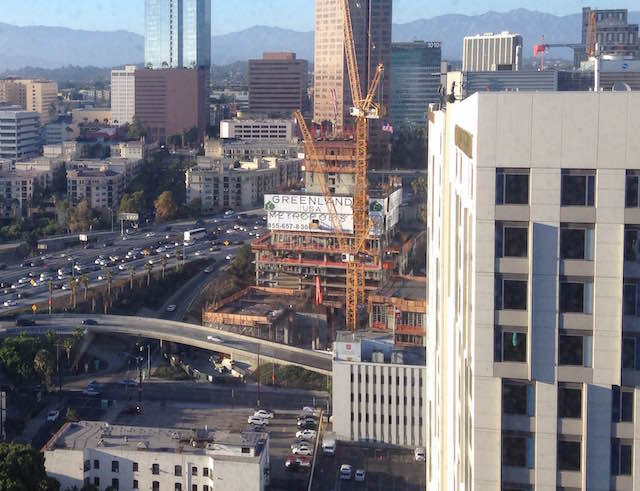 There are cranes everywhere (Photo by Juliet Bennett Rylah/LAist)

On Tuesday, the L.A. City Council voted to place the the "Build Better L.A." initiative on to the November ballot, according to L.A. Weekly. If approved by voters, the measure would establish the framework for building affordable, low income and very low-income housing into the oodles of new housing development cropping up around the city. Officially, the ballot measure will be known as the Affordable Housing and Labor Standards for General Plan Amendments and Zoning Changes.

Development in Los Angeles is a particularly hot-button issue these days. As residential high-rises fly up all across the city—especially in Hollywood and downtown L.A.—an ideological rift between proponents both for and against residential density in L.A. has formed. Folks arguing for density argue Los Angeles must build more housing because the city has a severe housing shortage that, unless addressed, will lead to higher rents (like the Bay area). Folks arguing against density say cramming more people into our city will lead to even more congestion, much of the new development is technically illegal, and that most new building can hardly be considered 'affordable' or accessible to average Angelenos.

The measure also includes provisions to ensure 30 percent of the construction workers hired to work on new projects be hired locally, and that 10 percent be hired from neighborhoods where the median household income is below $40,000 annually, according to Curbed L.A.

The Build Better L.A. initiative was developed by a combination of grassroots neighborhood organizations and established organized labor in Los Angeles county. Groups like T.R.U.S.T South Los Angeles, the Alliance for Community Transit-Los Angeles and the L.A. County Federation of Labor are all involved.

Coincidentally, the Build Better L.A. initiative stands virtually in direct opposition to the (also proposed) Neighborhood Integrity Initiative (NII). Where Build Better L.A. wants to spur the rate of building, the NII wants new construction to be halted all together while the city retools its (again obsolete) zoning code.

In a sense, both the initiatives are two sides of the same (obsolete zoning code) coin. Where Build Better L.A. creates a legal loophole for developers looking to get around zoning laws that restrict the height or density a proposed project, the NII thinks the city needs to overhaul it's zoning code entirely before any new building takes place. For what it's worth, institutional efforts to retool the city's old code are already underway.

13 of the 15 L.A. City Councilmembers voted in favor of placing the initiative on the November ballot. Councilmember David Ryu was the lone dissenting voice (Mitch Englander was absent).

Note: This story has been edited to reflect the correct percentages of affordable units mandated under the terms of BBLA. We originally misstated the numbers, and apologize for the error.