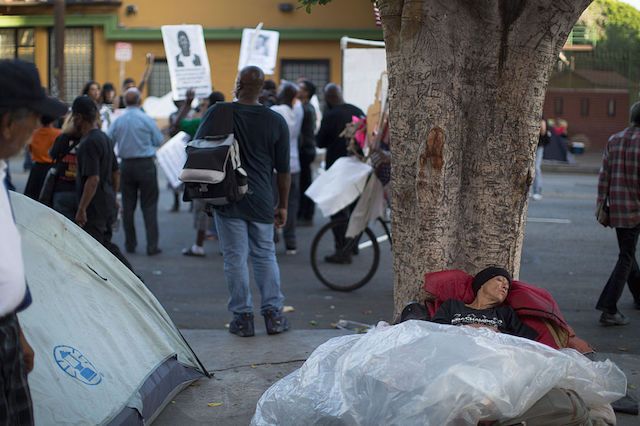 Marchers participate in the ''National Day of Protest to Stop Police Brutality, Repression and the Criminalization of a Generation'' on October 22, 2015 in Los Angeles' Skid Row. (Photo by David McNew/Getty Images)

The Los Angeles Police Commission approved a new policy Tuesday directing LAPD officers to treat homeless individuals with "compassion and empathy," according to the L.A. Times.

"Encounters with the city’s homeless population," as the L.A. Times writes, "have long been among the most sensitive and legally fraught parts of being a Los Angeles police officer," and the situation—along with the number of Angelenos living on our streets—has only grown more fraught over the past few years. The homeless population in Los Angeles County increased by 12 percent between January 2013 and January 2015, according to The New York Times, who also report that it jumped another 5.7 percent during 2015. The fatal May 2015 shooting of Charley Keunang on Skid Row, which was captured in a viral video, also brought renewed attention to the fraught relationship.

The new policy is meant to serve more as guiding principle rather than in-depth guideline; it is a “philosophy more than it is the nuts and bolts,” Cmdr. Todd Chamberlain, who heads the LAPD’s homeless efforts, told the L.A. Times. That said, it does codify a number of important principles, including a homeless individual's right to refuse services, and the fact that an individual's housing status alone is not sufficient basis for detention or arrest

The new policy intends to ensure that LAPD personnel are familiar with and recognize the special needs of people experiencing homelessness in Los Angeles, maintaining standards of professionalism and taking into account the unique challenges that homelessness causes for individuals and families, according to Police Commission documents.

More specifically, the policy directs LAPD officers to (when appropriate) offer guidance and information on obtaining temporary housing, medical or psychological services if needed, but also to "steadfastly respect" the individual's right to refuse assistance.

As mentioned above, the policy mandates that "an individual's housing status is not a sufficient basis [alone] to justify a lawful detention or arrest," and also prohibiting officers from "involuntarily moving a homeless individual from a location where the person may lawfully stay, absent legal justification to do such as when there is a safety or security concern." Codifying this particular principle is especially important given the vulnerability of homeless individuals in certain gentrifying areas like downtown L.A., where, as the L.A Times writes, "police have taken a leading role over the last decade helping clean up the streets... resulting in historic legal battles over the rights of homeless people and the limits of law enforcement."

The policy also emphasizes the need for LAPD officers to be sensitive to the variety of special needs and circumstances of those experiencing homelessness, reminding department personnel that homeless individuals may have mental illnesses or other medical conditions than hinder their ability to effectively communicate with police, and that individuals may also lack identification or other proper documents.

Mayor Eric Garcetti praised the new policy, telling the L.A. Times that it “gives officers guidance on how to elevate those interactions into opportunities,” but some homeless advocates argued that it didn't go far enough. “The policy is probably too generic to have much effect,” Gary Blasi, a retired UCLA law professor who studies homelessness told the L.A. Times. “It … will enable the city to say that it has a humane policy while doing nothing concrete to make police actions more humane.”

Related:
The LAPD (A Different One) Will Perform A Play About Homelessness At The Hammer Museum