Nightlife in the LGBTQ community has never just been about having a good time. So many significant moments in our history have occurred in bars and clubs. They've served as havens for escaping societal persecution, where we can celebrate who we are and who we love. They've acted as the bloodline of our community and we need them now more than ever. For Pride Month, we've compiled a list of Los Angeles' 10 most essential LGBTQ bars, from dive-y watering holes to banging night clubs, where you can go to drink, dance, meet a lucky someone (or two, or three), and express yourself fearlessly. These are our temples. Our houses of worship. Share your own favorite spots in the comments! 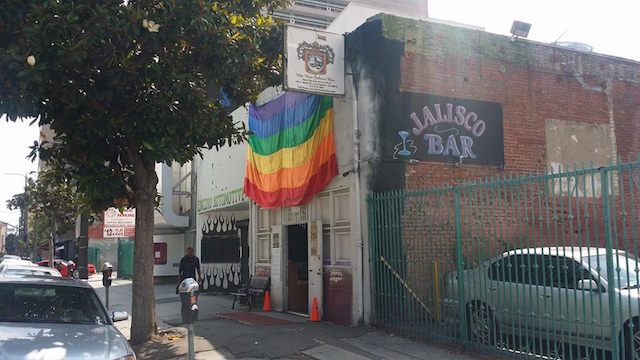 With the recent news that the entire block's businesses may be up for demolition, including neighbor The Smell, the New Jalisco Bar deserves its spot at the top of this list because it may soon go the way of Roosterfish, Jewel's Catch One, MJ's, Spotlight and not be around much longer. Catering to a mix of mostly Latino, hipster and drag crowds, but welcome to all, The New Jalisco billed itself as, "The Only Gay Bar in Downtown" until 2015 when Precinct opened down the street. Super cheap Tecates and tequila shots are this dive’s specialty but the party really begins at 10:30 p.m. nightly when LA’s best Latinx drag queens hit the stage. 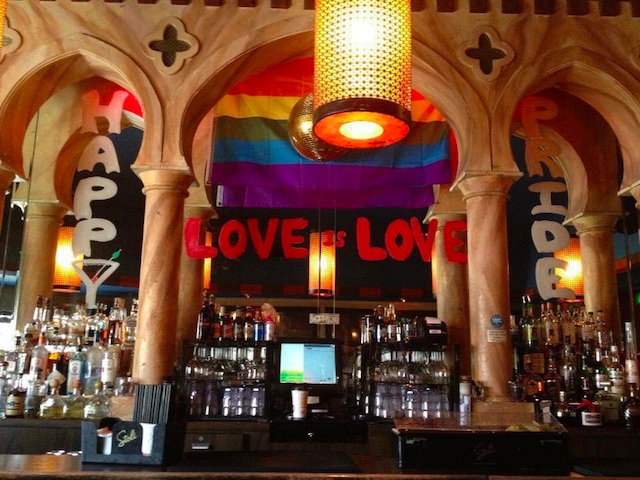 Akbar is sometimes referred to as, "The Abbey of the East Side." While that may be true, it's also everything The Abbey is not. A neighborhood oasis, Akbar is intimate, casual, friendly, no-frills, cheap, and you're more likely to hear Kate Bush on the jukebox than Meghan Trainor. It's more like a gay Cheers—everybody knows your name, from the bartender to the door man to the DJ. If you're not on a first name basis at the beginning of the night you will be by the end. But similar to The Abbey, Akbar is extremely straight-friendly—the more the merrier! Mario Diaz's monthly Full Frontal Disco is a must for dance lovers, and the summer's Bears in Space parking lot beer busts on Sundays are perfect for cooling off and getting it on. 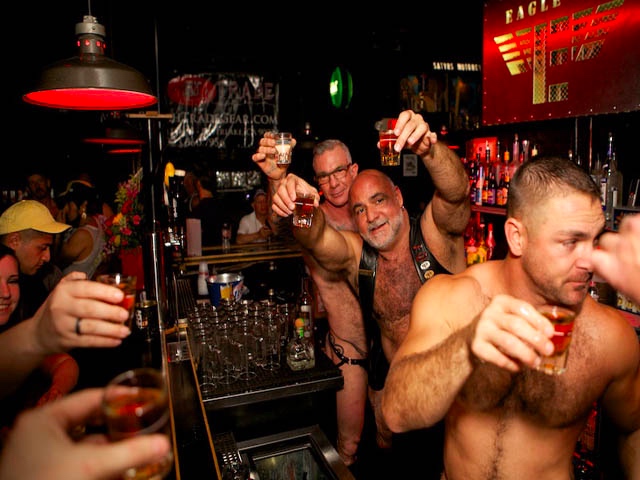 At The Eagle. (via The Eagle)

"Have you been a bad boy?" you may be asked by Principal Bob, a frequent patron with a legendary paddle, on a school night at L.A.'s version of The Eagle. Leather daddies, bears, and those who love them frequent this sleazy establishment, which offers three pool tables, wet underwear contests, a (sometimes) debaucherous bathroom trough, and inexpensive pitchers of Bud Light. The Eagle is cash-only which only adds to the decadent vibe of underground gay bars of yore, which is why you may want to ask your girlfriends to sit this one out and meet you for a last call dance at Akbar afterward. Popular nights include Cub Scout, Big Fat Grunt, and Meat Rack.

While these days most of our gay bars are considered gay & lesbian, and a lot of them feature lesbian-themed nights, The Oxwood Inn is officially the last lesbian bar in Los Angeles proper. If you haven't been before it’s easy to miss, sandwiched between an apartment complex and a Chevron. As a longtime Van Nuys establishment, it's worth every moment of the trek out here, especially on Thursdays when karaoke nights take over. Saturday nights are Club Shine, a transgender lesbian dance night, and are definitely their most popular. With cheap drinks, a pool table, diverse groups of girls and tgirls alike (and a few stripper poles on the dance floor), The Ox is an often overlooked gem and we should do what we can to keep it alive. 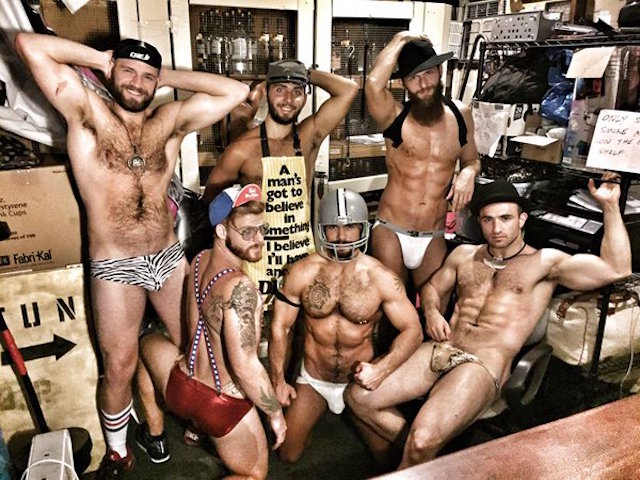 BFD at Fubar (via @fubarlosangeles)

As West Hollywood's gay bar that is furthest east on Santa Monica Boulevard, Fubar is a sexy concoction of the Boystown mainstays back west and the laid-back haunts out east. It's dark and dingy, but also cavernous and loud. Fubar's go-go boys are mostly covered in tattoos and are scruffier than their WeHo counterparts. The most popular night is Thursday when BFD takes over, featuring the Big Fat Dick contest where patrons have their naughty bits photographed and voted on by the crowd at the end of the night. Hopefully you can either leave as the winner or leave with him. 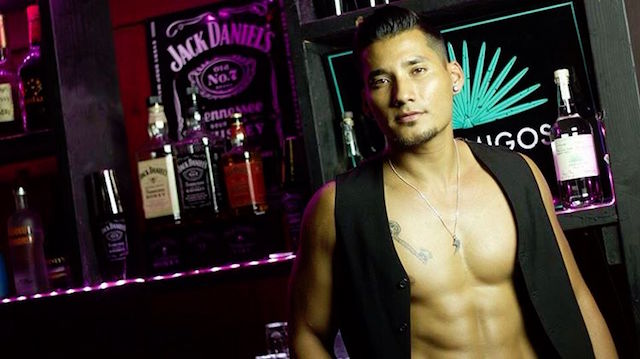 NoHo's only queer club spins Latin and dance music on its popping dance floor and has three different bars, making it easy to get drinks even on the club's most popular nights. As a newcomer you'll feel immediately welcome to the Club Cobra family from the door guy to the go-go boys to the hunky bartenders. Club Cobra also holds the distinction of having the only trans night in Los Angeles with Transfix on Thursday nights. Happy hour and free entry is offered nightly from 9pm to 10:30pm. 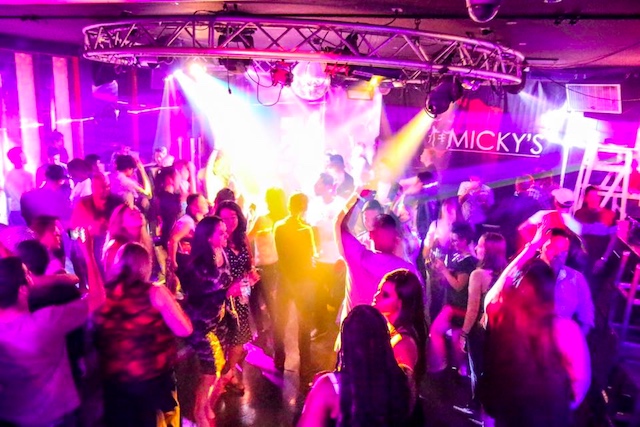 Not even a severely damaging electrical fire, charges of lewd conduct from former employees, or a 30-day closure by the state's Alcoholic Beverage Control board can extinguish Micky's party. The storied Micky's is known for raunch and reverie both behind and in front of the bar. Monday nights are Showgirls nights, featuring some of our favorite queens from RuPaul's Drag Race. On Saturdays you may hear Rihanna's anthem, “Please Don't Stop Music” blasting throughout the club, and Micky's doesn’t: It's the only place on Santa Monica Boulevard that is open until 4am, making it a favorite among locals for its raucous after-hours dance floor. 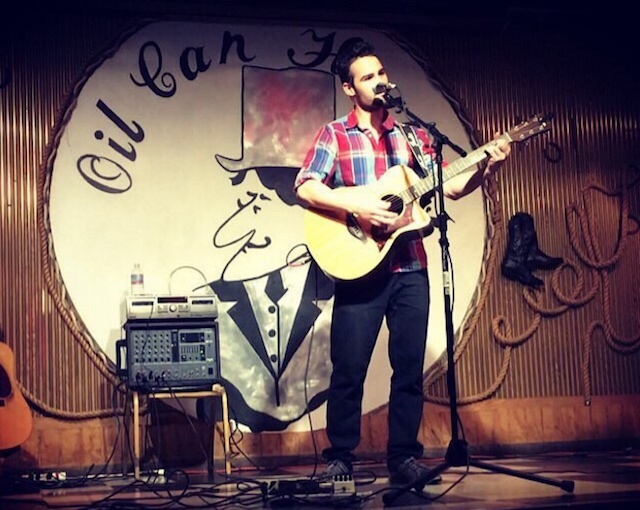 Certainly the only bar on this list where a song by Reba McEntire or Shania Twain would not be out of place. Oil Can Harry's is LA’s go-to gay cowboy bar—well, our only one. Honky-tonk line dancing on Fridays, retro 70s disco on Saturdays, and karaoke most nights make the joint popular among older folks, lesbians, straights, and those of us champing at the bit for a diversion from our usual hotspots. With half -off drinks and stiff gin and tonics before 10 p.m., you and your friends will want to get over the hill early. This is the type of place you walk into as a group of four friends and exit as eight.

Last year, Precinct was the first to usher in a new wave of gay bars opening downtown. Its central location has made it popular amongst both west- and eastsiders and its spacious open air patio has made it a favorite for those of us still packing Marlboros, or simply packing heat. The Boulet Brothers present Queen Kong every Friday, a night of "High Faggotry, Art, Trash, Disco, Dick & Rock & Roll." The monthly Bonkerz! usually features a live performance by drag queen royalty Jackie Beat and promotes itself as "a big dumb gay party," which is sometimes just what we queers need. 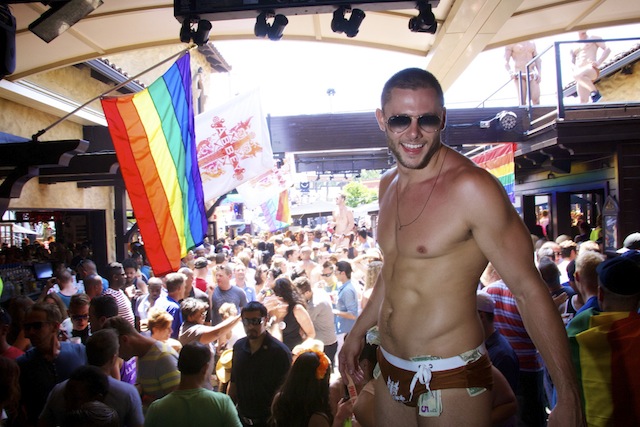 The Abbey Food & Bar (Photo courtesy of The Abbey)

Ah, yes. No list of essential Los Angeles gay bars would be complete without The Abbey. Celebrating their 25th anniversary earlier this year, The Abbey remains a constant force in our collective gay bar experience. With the acquisition of the bar next door, Here Lounge, The Abbey is poised to only get bigger. Every night is popular, but don't be dissuaded by the long line to get in, it moves fast. While all of us have rolled our eyes at The Abbey's dominance on the LGBTQ nightlife scene, we inevitably find ourselves back here. Maybe it's the four bars, the sexy go-go boys, the surprisingly quick drink service, the dancing, the cavernous Gothic-meets-Mediterranean indoor/outdoor spaces, the female go-go dancers, the strong drinks or the Sunday brunch. Whatever it is, The Abbey is one of those bars where once you walk in you immediately feel it's a place you don't have to hide.