It's Time To Put Cheddar Cheese Back On Apple Pie 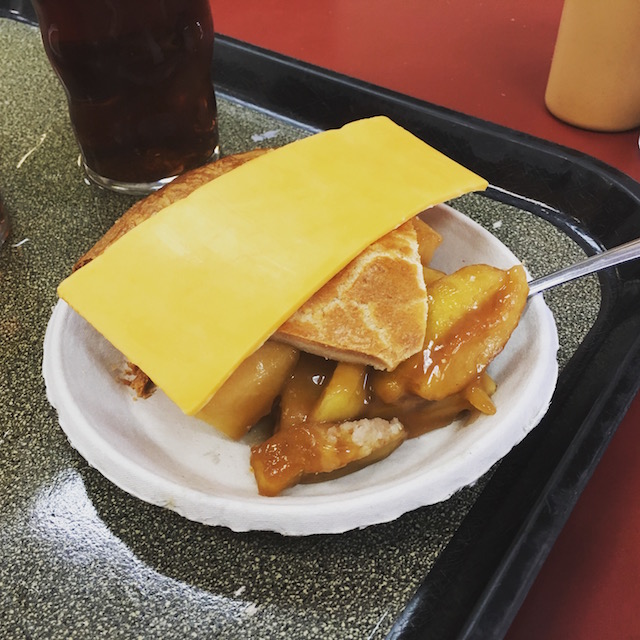 The cheese is meant for a sandwich. But it also has a home on top of that pie. (Photo by Tim Loc)

I'd first read about it in Stop-Time, that seminal memoir from the 60s. In one chapter, our hero—a grade-school-aged Frank Conroy—is on the lam after he's run away from home. He makes a detour in Delaware and bumps into a kindly city employee who, suspecting that he's a transient, treats him out to lunch:


The smell of the food made my hands tremble. Franks and beans, thick slices of tomato on a bed of lettuce, bread and butter, two half-pint containers of milk, and a piece of apple pie with a slice of cheese on top. The first mouthful was rapture.

Hold on there. Cheese? On apple pie? I later found out that the pairing is, indeed, considered a Thing, with cheddar being the preferred choice of cheese. And after my second go-around with Stop-Time I decided I was going to do it: I was going to ask for the cheese.

So, up at the counter at Philippe, I requested a slice of cheddar for my order of apple pie. The server didn't miss a beat. She just settled the cheddar on my pie and gave me my total. It was another patron—a middle-aged man in the next line—who lifted an eyebrow.

"Why the cheese?" he asked.

Anyway. The pie was good.

I should mention, for context, that I'd never warmed up to apple pie. It always felt like a hasty assemblage of constituent parts, less so a coherent whole. I always found the apples a little too spongy, a little too tart. The filling was often too sweet in a false and over-processed way. If daytime television had a taste, it would be the filling.

The cheddar was a welcomed addition. It didn't transform the pie, but it drew everything in for a closer focus. The pinched sharpness of the cheddar served as a nice counterweight. The sweetness of the syrup was a little less smarmy, the apples a little less puckering, the awkward sensations— from the gentle squish of the fruit, to the dry crumble of the crust—not quite as distracting. Here we get some semblance of a happy middle in which cheese, fruit, and crust learn to coexist—like a season of The Real World served up on a pan. 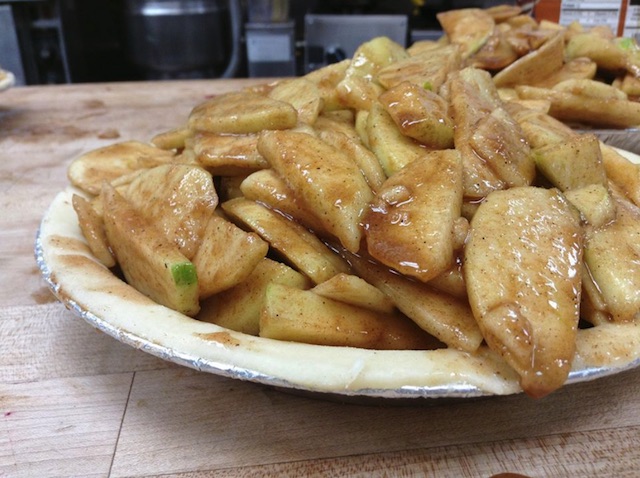 An apple pie (sans cheese) at Republic of Pies, waiting to go in the oven (via Facebook)

In writing this story I've run across plenty of people who are adverse to the idea of cheddar on their apple pie. Some regard it as downright sacrilege, as it's long-known that apple pie is a cultural institution. But to this I say, aren't all foods elemental when you parse it down? What's so weird about a combination of dairy, grains, and fruit? Aren't yogurt parfaits populist enough to land itself on the McDonald's dollar menu? And if, say, Churro Borough inserted a glob of raspberry ice cream in between two churro buns, would we even flinch?

Philippe isn't the only place in L.A. where you can request that slice of cheddar. Theoretically, you can get it anywhere that has pie and cheese.

North Hollywood's Republic of Pie, for instance, is hip to the idea.

"We don't get many orders for it, but maybe a couple people would come in for it. And I believe there's one man who consistently asks for it," said owner Vincent Kim.

The order isn't a regular partof their daily menu, per se, but the shop is always prepared to accommodate. "We have the cheddar for other dishes like our mac-and-cheese. But we can bring it out if a customer wants it for their pie," said Kim. "It adds a savory kick. It's a pretty good match."

Other shops have also tried to sell a next-level version of the concept. Pie Hole, that vanguard of L.A.'s pie resurgence, had once offered an apple pie with a cheddar-baked crust (the recipe is not uncommon). But, according to founder Lindsay Heffner, it was "not very popular in L.A." and orders for the pie were few and far between. 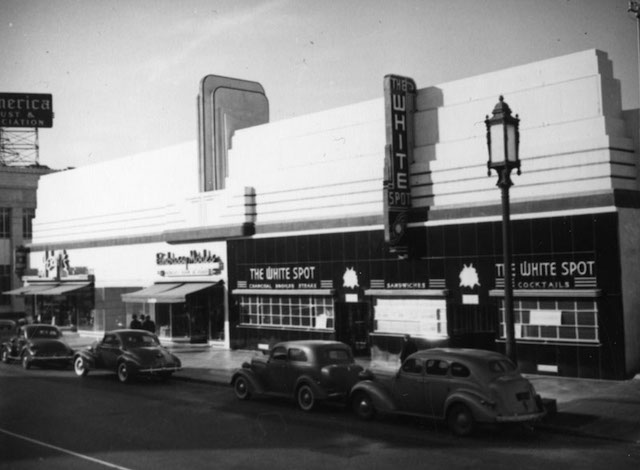 While cheddar has yet to be embraced by the modern pie-eater in L.A., it's also no stranger to the Southland. According to the late James Beard, among the OGs of celebrity chefs, the former White Spot Cafe by Wilshire and La Brea had its own version of the delectable combo. "They made quite a decent apple pie that was served with warm, melted sharp cheddar cheese poured over it at the last minute—not processed cheese, but a good natural cheddar. It had the customers nearly fainting," Beard wrote in The Armchair James Beard. The White Spot, which people also claimed to have invented the chili burger, shut its doors in the early 1940s.

The likely line of thought is that, while the pairing has lost ground in L.A., it's still popular in some distant, nether-region of America, possibly a place where people throw a fit when you say the word "soda." But that doesn't seem to be the case. It just looks like it's not commonplace anywhere in North America.

The most oft-cited home of the dish is the Northeastern region of the U.S. "New Englanders and others have known the gustatory pleasures of combining apple pie and cheddar cheese for a very long time," pie expert Ken Haedrich said in Apple Pie: 100 Delicious and Decidedly Different Recipes for America's Favorite Pie. In 1999 the State of Vermont declared the apple pie as its State Pie. And the House bill (signed by then-Governor Howard Dean, no less) actually declared that a "'good faith' effort" serving of apple pie would include a "a slice of cheddar cheese weighing a minimum of 1/2 ounce."

And yet, in spite of all this history and rah-rah attitude, it seems like the dish's popularity has waned among New Englanders; a couple pie shops in the Boston area told me that the order is exceedingly rare. Ross Hazelett, who works at one of the popular Petsi Pies location in Boston, told me that he's taken the order only once in 2016. "It was from an older gentleman. I think it's something that used to be popular but is just a novelty now," said Hazelett.

And then I got word that the dish is a Midwestern quirk. Heffner said this was her husband's hunch. And when I'd called a prominent pie shop in Echo Park, the server informed me, with a sort of scary fanaticism in his voice, that he was "a Midwesterner" and could "tell you right now" that it is "very much a Wisconsin" thing and that the cheddar is "just delicious." Wisconsin, after all, proclaims itself "America's Dairyland." But then I called two lauded pie locations in Wisconsin—Stockholm Pie and Humble—and the clerks told me, in adamant tones, that no customer had ever requested a slice of cheddar with their apple pie. And in fact their reactions made me feel like some crazy Angeleno who was calling from 2,000 miles away to bring good tidings from the L. Ron Hubbard camp. 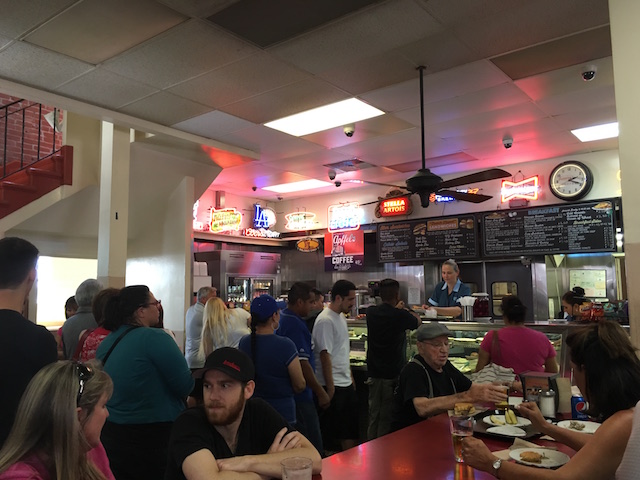 Inside Philippe (Photo by Tim Loc)

I'd also acted on another tip and directed my attention to Canada, our neighbors up in "The True North." Canadian food historian Ian Mosby, author of Food Will Win the War, told LAist that he thinks cheddar-and-pie is a "pretty common Eastern Canadian dish," though out in British Columbia and the West there's almost zero visibility of the pairing. I had one of my Canadian friends conduct a personal survey; while he found that most of his buddies had heard about the pairing (mostly through parents and grandparents), quite a number of them expressed a refusal to even touch the dish. "My grandfather swore by it and I thought it was so weird," said one responder.

My takeaway, then, is that all over North America there's a pervasive aversion/indifference/ignorance over the matrimony of cheddar and apple pie. I think, at its root, the issue has to do with the dish's standing in a rapidly-evolving food scene. In a day when pastry chef are slinging kouign-amann on the regular, the apple pie must seem like a mundane thing. And in the vaunted world of cheese, where Brie and Camembert are practically household names now, a block of cheddar must seem very basic. Taken together, cheddar and apple pie comes off as a hapless and dated pair; like mom and dad at your ArtCenter thesis show.

But this is no excuse, of course. All I know is that I like having a slice of cheddar with my apple pie. And in fact I insist on it now. It's good! And it involves two staples of the American diet! You will, however, get some looks from other people. Just tell them you read it online.