Why There Is No Apostrophe In 'Ralphs' 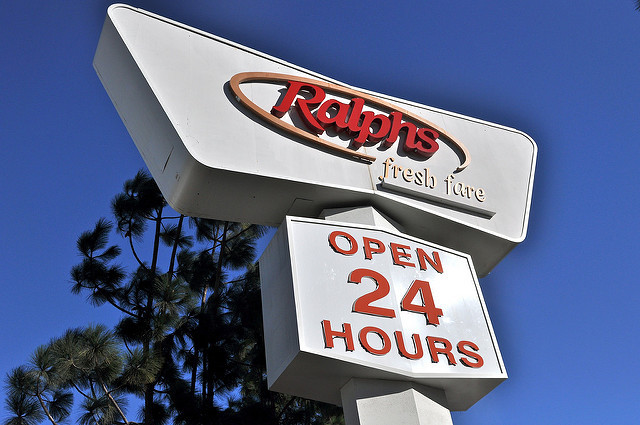 (Photo by Sarah Ackerman via the Creative Commons on Flickr)

Surely you are familiar with that bright red logo, and the scores of Ralphs supermarkets across the region. The chain, with their with 368 stores, is more than just Southern California's market leader in grocery sales—they also played an integral role in the birth of the supermarket as an entity. And in case you've never noticed, it's "Ralphs," not "Ralph's."

Today, we will address a question that has vexed Southern Californians for nearly a century. Why is there no apostrophe in the company's name?

The answer is shockingly simple. The company did indeed have a namesake of yore, but Ralphs wasn't a given name, it was a surname. Meet George A. Ralphs, a Missouri native who was born in 1850—the same year California entered the Union.

Ralphs moved to San Bernardino as a child and partnered on his first grocery store downtown in 1873, with the Ralphs & Francis store at Fifth and Hill. According to our favorite local historian Nathan Masters, Ralphs' business boomed. He and his brother Walter bought out [S. A.] Francis, and opened their own two-story Ralphs Bros. Grocers on the southwest corner of Sixth and Spring in 1876. 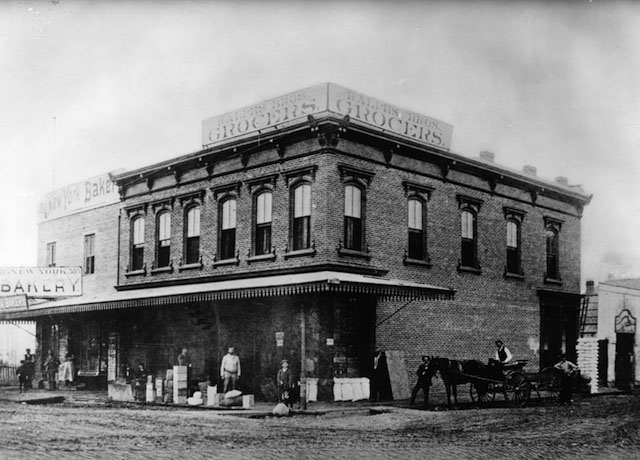 Exterior view of Ralphs Bros. Grocers on the southwest corner of 6th and Spring streets, circa 1886. (Photo courtesy of the Los Angeles Public Library Photo Collection)

According to Masters, Ralphs Bros. quickly "became a hub for everyday commerce," with downtown locals arriving on foot and farmers making use of the horse-hitching rack to stash their wagons, which they soon "loaded with staples like grains, butter, bacon, and eggs that fed the booming city."

The business officially became a chain in 1911, when the brothers opened a second outpost at Pico and Normandie. By 1928, they had expanded to ten stores, and George A. Ralphs had essentially invented the supermarket as retail concept.

Back then, it was still common for shoppers to visit a different store for each of their grocery needs. "One would get their vegetables from a standalone green grocer, their bread from an independent baker, and their flour from chain groceries like the Great Atlantic and Pacific Tea Company," as Benjamin Davison explained in a Zócalo essay on the history of Ralphs.

But by 1920, a quarter of Angelenos owned automobiles, and those myriad on-foot errands were growing increasingly impractical. "People could not simply park a car in a crowded urban neighborhood and buy everything they wanted at once," Davison explained.

“Drive-in” groceries, which were attached to gas stations and "offered items from flour to canned vegetables," had begun to appear in Los Angeles as a quasi-solution in the 1910s, according to Davison. The idea was getting there, but white middle class shoppers (i.e. the very consumers that drive-ins were trying to attract) didn't love "the reality that they were purchasing their food in a glorified gas station."

That was the supermarket—and by extension Ralphs'—true innovation, pairing not just convenience and parking, but also respectability. When he opened his first real supermarket in 1926, he "combined many of the features of a drive-in without any of the drawbacks," as Davison explained:


At almost 10,000 square feet, the new property was much larger than Ralphs’ drive-ins, offering a larger selection of produce, meat, and dry goods in sizeable departments. Most importantly, the new store was built as a stand-alone, warehouse-like structure beside a large parking lot. Unlike grocery stores, it was not tucked into residential neighborhoods or attached to other commercial structures.
Ralphs architects were keenly aware that they had embarked on a unique project, and designed the property to give routine shopping some of the drama of the stylish department stores downtown. The supermarket stood as a bridge between the urban core and the suburban home. The home economics columnist for the Hollywood Daily Citizen, Harriet Burdsal, captured this mood, comparing Ralphs’ creation to a “marketplace of Rome, where Phoenicians came to peddle their bright silks and bits of treasure from afar.” 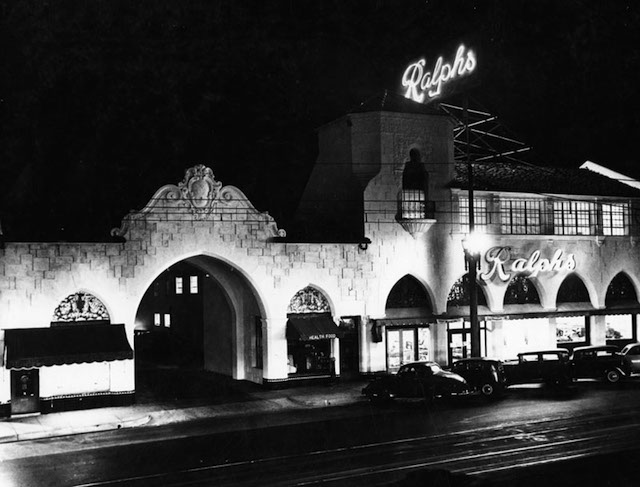 Night view of a Ralphs Grocery Store in Pasadena, circa 1929. The building was designed by Morgan, Walls & Clements, who were responsible for a number of Southern California Ralphs. (Photo courtesy of the Los Angeles Public Library Photo Collection)

A&P, née Great Atlantic and Pacific Tea Company, may have been the first chain grocery store, and Clarence Saunders’ Memphis-born Piggly Wiggly stores may have given us the self-service concept, but Ralphs invented the supermarket as we know it today.

In fact, according to The Oxford Encyclopedia of Food and Drink in America, the term "supermarket" itself even originated right here in Southern California in the 1920s, spreading in use as the Ralphs chain grew (Alpha Beta Food Markets, another local chain, was also an early leader). And speaking of names, let us return for a minute to the O.G. Ralphs clan, who are still around today.

In fact, just this week a great many of the Ralphses gathered in Gorman, an unincorporated community in northwestern Los Angeles County, to see County Supervisor Michael D. Antonovich officially rename a a 10-mile segment of road in their honor.

The Ralphs family has had a presence in Gorman since 1898, when Oscar Ralphs (brother of George and Walter) purchased 2,700 acres of ranch land. The family’s matriarch Mary Ralphs established the local school board there and, for a time, Ralphs family members held every seat on both the Gorman School Board and the local water district board, according to the Santa Clarita Valley News. 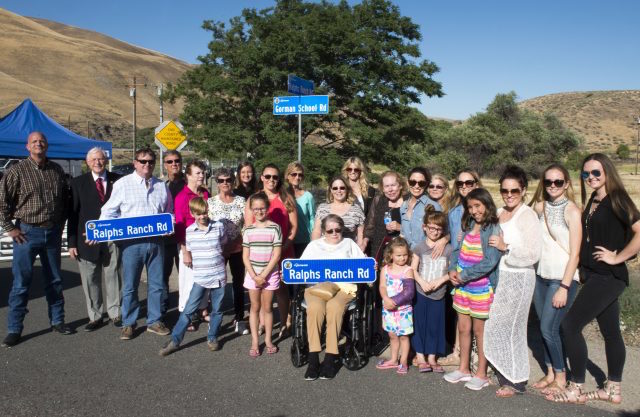 The Ralphs family at the renaming of Ralphs Ranch Road. (Photo courtesy of L.A. County)

“On behalf of the County of Los Angeles, we want to congratulate the Ralphs family for their continued contributions,” Antonovich said during the event, which was attended by third, fourth and fifth generation Ralphses. “They continue to stay involved in this great community, and we appreciate that.”

And that newly-renamed street? It's Ralphs Ranch Road—no apostrophe.