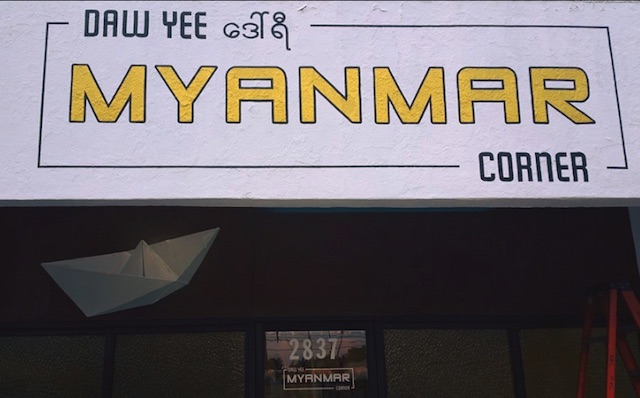 The Los Angeles area has the second largest population of Burmese living in the U.S. (the Bay Area ranks number one). Taking that into account, you'd think that it'd be a little easier to find a plate of lahpet or kyay oh. Alas, it seems as if you can count all the L.A.-accessible Burmese joints on one hand. In a 2008 review for Jasmine Market, Jonathan Gold said that the Culver City restaurant was "as far as I know, the only Burmese restaurant west of the San Gabriel Valley." This says a lot about our options.

Not much has changed since 2008. Aside from Mutiara out in Inglewood (and Jasmine Market), the bulk of Burmese fare is still found in the SGV. Thankfully, one of those SGV locales has branched out to Silver Lake; Monterey Park's well-regarded Daw Yee Myanmar Cafe hosted last week a soft-opening of its new Silver Lake location. The spot, named Daw Yee Myanmar Corner, is located in the same plaza that houses Pho Cafe and Same Same, which marks the area as Silver Lake's de facto hub of Southeast Asian eats.

What constitutes Burmese food? As with many cuisines from the region, there is an interplay of sweet and sour flavors. There is also an emphasis on spices such as turmeric (think: curry). And considering how Myanmar's "cool" seasons average temperatures in the 80s, it's not surprising that refreshing salads—such as the ubiquitous laphet thoke, the tea-leaf salad—are a staple of Burmese kitchens.

The menu at Daw Yee Myanmar Corner, a slightly truncated version of the Monterey Park menu, reflects this dichotomy of hot and cool, piquant and subdued. Of course there are the salads, which are crisp and often have a nutty texture. The khao dwe thoke consists of wheat noodles tossed with coconut chicken, shallots, and a tamarind dressing. The tea leaf salad is a mix of fermented tea leaves, diced tomatoes, fried lentils, butter beans, and toasted sesame. 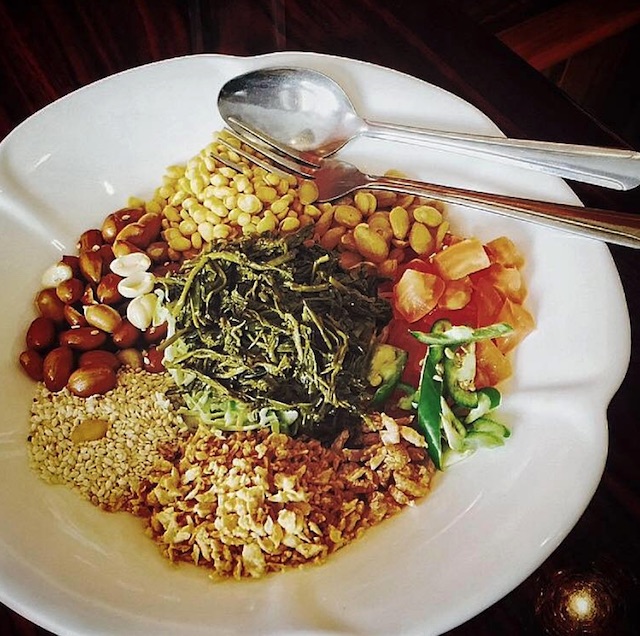 If you haven't yet been indoctrinated into Burmese food, you might be inclined to go with something a little more familiar. Among the curries, the vegetable option is perhaps the most intriguing on paper; it's a maelstrom of okra, eggplant, lentils, and daikon. And the samosas—filled with potatoes seasoned in masala—can serve as a humble precursor for your foray into a new cuisine. (It would be germane to mention that, as noted at KCET, Burmese food carries over influences from Thailand, China and India—some of Myanmar's closest neighbors.)

Among the Daw Yee "favorites"—as labeled in the menu—the mohinga might be the headliner on the bill. It is, after all, Myanmar's national dish. The dish consists of a fragrant catfish chowder served over rice vermicelli. The meal, as with most things on the menu, is flavorful but also lean and somewhat understated. To close out your dinner, desserts include Burmese favorites like the shwe kyi cakes, which are part crumbly and part gummy. For a hot day, this writer recommends the molasong; coconut milk stirred with tapioca and slithery strands of pandan jelly. It seems, in short, that Burmese desserts have a lot of fun with contrasting textures.

Myanmar Corner, while it shares the same DNA as its parent store, isn't an exact rethread of the Monterey Park location. As indicated on the menu, the restaurant serves up organic and gluten-free options. When in Rome, right?

Daw Yee Myanmar Corner is located at 2837 Sunset Boulevard. The store is open for dinner on Mondays, Wednesdays, Thursdays, and Fridays. It's open for both lunch and dinner on Saturdays and Sundays. Because the restaurant is still in the middle of its soft opening, check their Facebook page to see if there are any schedule changes. Currently, all items have a 10 percent discount during the soft opening.