Will This Be The 'Worst' Fire Season Ever Or Are We Just Obsessed With Our Own Doom? 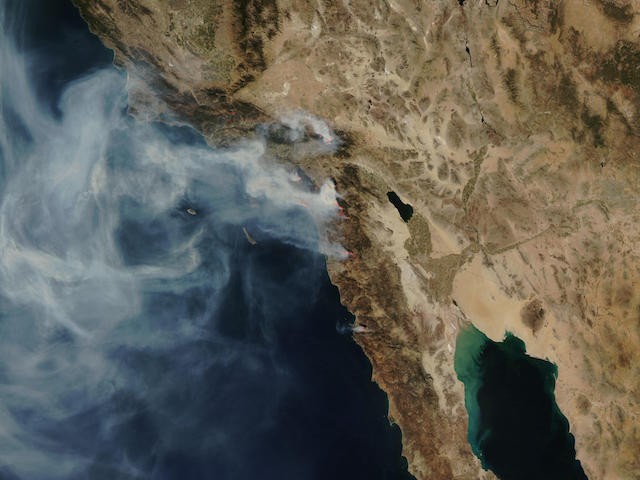 This story was published in June 2016.

As summer begins to simmer across the city, five long years into a record drought, the disaster-oracular fire headlines have begun: Region Ripe for Possibly Worst Wildfire Season in Southern California, NBC 4 warns from the local news; Could This Be California's Worst Wildfire Season? The Atlantic asks the nation.

The prophesies are not without premise. Although the actual city of Los Angeles escaped 2015 relatively unscathed, ember-wise, last year was a record fire season across the country. And there are a number of other factors stacked against us. The drought, as you well know, is primer to flame, as are hot temperatures, which are only expected to rise. The effects of climate change are arguably akin to carrying around a bottle of Kingsford lighter fluid, with the Department of Agriculture reporting that our warming globe has led to fire seasons that are now on average 78 days longer than in 1970. Glen MacDonald, a climate change expert at UCLA, told Marketplace that "rising temperatures tied to climate change mean fire season starts earlier, especially in places like drought-ridden Southern California." 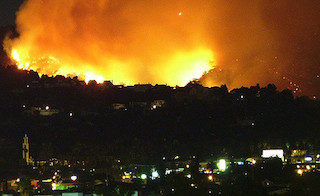 Griffith Park, 2007. (Photo by Heather Campbell via the Creative Commons on Flickr)

And our disappointing El Niño? Los Angeles County Fire Department Chief Daryl Osby told NBC 4 that it brought just enough rain to spur the growth of grass and brush, which essentially serves as flame propellant during the dry summer months. But those are simply are an array of facts; we choose how to add them up.

Are we in for an all-time apocalyptic fire season? Or are we merely predicting our own doom, as we've done so many times before? The city burning, after all, "is Los Angeles' deepest image of itself."

When Brian Humphrey, a three-decade veteran of the Los Angeles Fire Department, picks up the phone, the first thing he wants to know is if we are calling about the smell. And then, when he hears that the inquiry is not about today's Maywood fire, but rather fires as a whole—and the fearful headlines—he laughs. Heartily.

"Do you know about clickbait and link bait?" Humphrey asked, without actually calling the headlines in question clickbait or link bait, just suggesting the possibility. "We don't want to get into Chicken Little the-sky-is-falling" scenarios, he said. "We want your attention and we want your action. But the world's not ending."

According to Humphrey, in his 23 years serving as a public information officer for the LAFD, not a single year has gone by without somebody, "whether it be a government leader or an activist," warning and/or proclaiming that this year would yield the worst fires in our city's history. "I've seen it used every single year," he said. 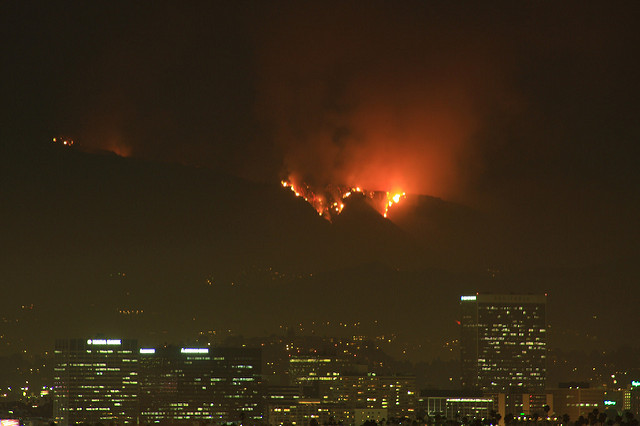 Photo taken from View Park during the 2009 Station Fire. (Photo by Jeremy Miles via the Creative Commons on Flickr)

Yes, Humphrey confirmed, the factors for wildfire danger are certainly present, but, as he explained, "the bulk of fire danger is determined by human factors."

"People can take simple steps," Humphrey assured us again and again, directing our gentle readers to make preparations in their own homes, to be careful of their impact, and to visit the state-run Ready for Wildfire site for more information.

All of which is extremely helpful, and we strongly urge you to follow his advice, but none of those instructions get at the central question of it—one that has been asked many times and many ways. What is it about our own destruction that we Angelenos find so seductive? Why do so many of us nearly revel in our precariousness, and the potential for disasters of biblical proportions (see also: waiting for The Big One).

In one of the very first blockbuster visions of the city burning, Tod Hackett, the protagonist of Nathanael West's 1939 novel The Day of the Locust endlessly plans his imperfectible magnum opus, "The Burning of Los Angeles," a vast painted canvas depicting just that.

Los Angeles has burned countless times, in both fiction and fact, to say nothing of the Bad Religion song.

"It is a curious form of romantic self-aggrandizement, one familiar from untold numbers of novels, short stories, films and songs that has now spread to video games," according to New York Times film critic Manohla Dargis.

No other city, as Mike Davis wrote in Ecology of Fear "seems to excite such dark rapture." According the Davis, the destruction of the city has been a theme in at least 138 novels and films since 1909, most of which were created right here in the dream factory. We are more than a little obsessed with what Davis dubbed "the conflagrationist potential of Los Angeles."

Here is a supercut of Los Angeles being destroyed in different movies:

"We are fascinated by it, it's part of our history," Humphrey, a fifth-generation Californian said when asked for his thoughts on the fixation with our city in flames.

"We look at hazards differently here," he continued, explaining that when you hear about water rescues taking place in the mountains, you rarely hear about local residents getting trapped in the water. "It's always visitors," he said. "But here in L.A., we have trouble keeping our locals out of the flood channels when it rains."

"Some people will say that observing fire is a primal instinct for humans. Viewed from afar, it certainly can have its own beauty. Most of us are fascinated by the two-dimensional aspect of fire and isn't until it actually affects us that it becomes three-dimensional," he said.

"L.A. is different in many ways," Humphrey went on. "For those who monitor mass media, we've been on the edge of our seats for many years and see it as a spectacle." For many viewers, our city aflame underscores, as Susan Orlean wrote, "the essential absurdity of Los Angeles—a city of far too many people, perched on wobbly geology, without water, and perfectly flammable.”

Writing of the 1965 Watts Riots, Joan Didion said that "what struck the imagination most indelibly were the fires. For days, one could drive the Harbor Freeway and see the city on fire, just as we had always known it would be in the end."

But we aren't viewers, or at least not just viewers. We are also citizens. "And behind that spectacle are human beings like myself, with our own families and homes," Humphrey said. "And we are not invincible."

None of us are. "This may the worst wildfire season ever, we don't know," Humphrey said. "But we need people to take smart actions."

There is typically, as Humphrey warned, a pickup in fires in early July, coinciding with the use of illegal fireworks to celebrate our independence. Things will settle for a little after that, "and then we'll reach the zenith, with Santa Ana winds," Humphrey said. Because when it comes to wildfire, "heat is an issue, but wind is king."

So be careful out there. Don't throw lit cigarettes out the car window. Remember that all fireworks have been illegal in Los Angeles since World War II. And if you really want to see the city burn, there are plenty of movies to choose from.