Clifton's Is Getting A New Coffee Shop And Chef 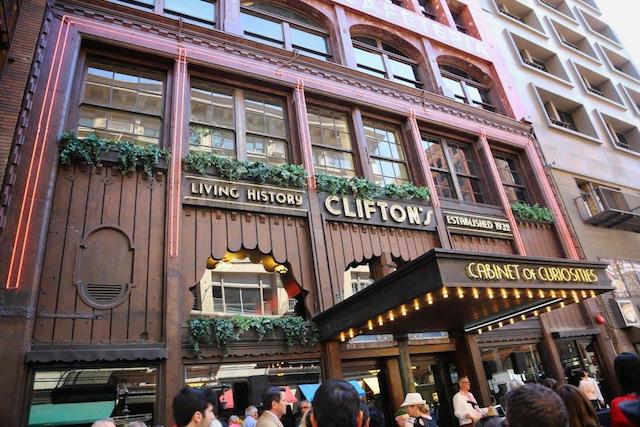 (Photo by Eugene Lee/LAist)
Clifton's Cafeteria is getting a new chef and opening up a coffee shop called The Old Mill.

Chef Andrew Pastore will be taking over the culinary program at Clifton's Cafeteria, giving the menu a complete overhaul save a few Clifton's staples, according to a release. Pastore said via a statement that the goal is to "offer the best selection by combining cafeteria classics as well as modern favorites with a whimsical twist."

Pastore plans to use seasonal ingredients as he combines those cafeteria staples—turkey and pie, for instance—with new dishes, like "a carved watermelon shark eating a mozzarella skewer."

Pastor was born in Brooklyn, went to culinary school in New York, and learned French cuisine at Jean-Georges' JoJo. He landed a job at Wolfgang Puck's Granita in Malibu, then spent time at Michael's in Santa Monica, Green Door and Pig & Whistle, among others. He also taught at Le Cordon Bleu, then the Art Institute Los Angeles College of Culinary Arts.

In addition to the new food, Clifton's will also be opening a coffee shop. It's name, The Old Mill, is a reference to a mill that formerly stood on the site where Clifton's resides today. The Old Mill will offer Stumptown coffee, sandwiches, desserts and doughnuts made in-house. Clifton's plans to soft open The Old Mill this weekend.

And for any night owls, new late-night bites are coming to the after hours menu, available from 9 p.m. to 2 a.m. Selections include pizza, sandwiches, charcuterie and desserts.

Related: Photos: Inside Clifton's Cafeteria, Restored To Its Magical Glory