Videos: The L.A. Pride Parade Through The Years, Defiantly Marching On 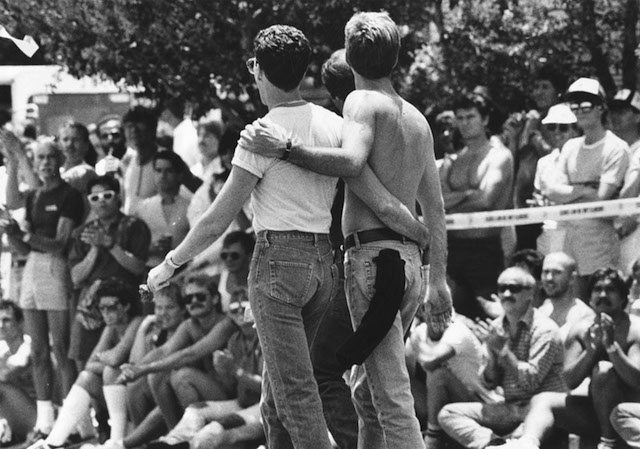 Yesterday—amidst news of an unimaginably horrific massacre at a gay nightclub in Orlando, and reports that a man in Santa Monica had been arrested with explosives and a plan to target the LA Pride festival—the celebration defiantly marched on West Hollywood, where hundreds of thousands of people filled the streets for the Christopher Street West's 46th annual L.A. Pride Parade.

There may have been complaints of over-commercialization during the lead up to this year's celebration, but, as any longtime denizen of West Hollywood knows all too well, defiant celebration has been a part of Pride since the very beginning. The very first iteration of the now global festivities were held in Los Angeles in 1970, to commemorate the one-year anniversary of the Stonewall Riots.

According to Los Angeles Magazine, Gay Liberation Front founder Morris Kight "received a letter from New York City [activists] saying, ‘Last year we had the Stonewall Riots, and we wanted to write and see if y’all were willing to do something on the West Coast to commemorate that date along with us.’ We said absolutely."

Kight originally wanted to hold a demonstration, which is what New York had planned, but Reverend Troy Perry, founder of L.A.’s LGBT-friendly Metropolitan Community Church, objected: “No," he said. "We’re going to do a parade. This is Hollywood.”

Kight and Perry, along with United States Mission founder Reverend Bob Humphries, were responsible for throwing that first Pride. The men battled roadblocks from a homophonic LAPD, as Perry recounted to The Advocate in 2007:


We went to the police commission to fill out an application for a parade permit. I answered questions in front of the police commission for about two hours when L.A.'s then-chief of police Ed Davis said, “Did you know that homosexuality was illegal in the state of California?” I said, “No, sir, it's not.” We debated until he said, “Well, I'll tell you something, as far as I'm concerned, granting a parade permit to a group of homosexuals to parade down Hollywood Boulevard would be the same as giving a permit to march to a group of thieves and murderers!”

Police grudgingly permitted the event, but tacked on fees totaling $1.5 million (adjusted for inflation, that would be roughly $9 million in 2016 dollars) so the three local activists enlisted the aid of the ACLU, and brought their case to the California superior court. The court ultimately "not only granted us the parade permit but also required the police to protect us as they would any other group."

Over 2,000 people took to the streets on Sunday, June 28, 1970. Today, there's a bronze plaque commemorating the event at the corner of Hollywood Boulevard and McCadden Place, where the parade began.

"While ragtag, the event was spectacular in its own right, and the spirit of the event was astonishing," C. Todd White recalled in Pre-Gay L.A.: A Social History of the Movement for Homosexual Rights.

"That first LGBT parade in Los Angeles put a political edge on our fight," Perry told The Advocate. "Never again would the police or anyone who tried to stop our movement frighten us. Our community made up its mind that year that the most important thing that we could do was to encourage people to come out of the closet by joining parades and demonstrations. And we have never looked back."

By the 1980s, most big American cities had their own Pride parades, and as West Hollywood City Council member John Duran told The Pride LA, the parade has usually reflected the face of LGBT community at any given moment in time.

Throughout the parade's 46 year history, L.A.'s LGBT community has answered fear and hate with love and revelry, defiantly celebrating on through a deadly epidemic, institutionalized homophobia and so many other challenges.

Some videos through the years: