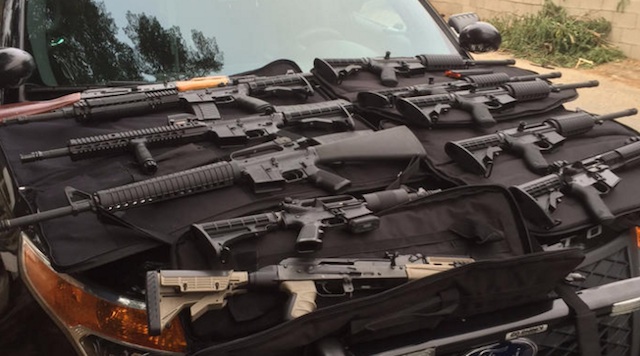 A gang sweep conducted in Corona on Thursday resulted in 52 arrests, and the seizure of a massive amount of weapons, drugs, and cash.

The L.A. Times reports that local crime had spiked in Corona recently, and the raid aimed to target members of the Mexican Mafia and Corona Varrio Locos.

Over the last several months, crimes that included extortion, robberies and a fatal stabbing in a park in Corona spurred a more cohesive investigation, according to Corona police Sgt. Brent Nelson. "Those cases brought everything together so that we could tie it into one group," Nelson told the Times. "Through the investigation, that’s where the conspiracies to commit murder, drug trafficking and drug violations came into place."

It was a large-scale operation, comprised of more than 300 officers from the state and local resources.

According to a press release from the Office of the Attorney General, in addition to the arrests, they also seized 67 firearms (including assault rifles and semi-automatic weapons); cocaine, methamphetamine, and marijuana with a total street value of $1.6 million; and $957,000 in cash.

As NBC L.A. notes, the Varrio Locos, who operate mostly in the city of Corona and around the Inland Empire, are an offshoot of Surenos, another SoCal gang that operates under the Mexican Mafia.

The Attorney General's office says that the brutal, highly-organized Mexican Mafia is largely known by their slang name "La Eme," and is prominent in the California prison system.