Photos: Plan Check And Sanrio Team Up For Another Kawaii Meal 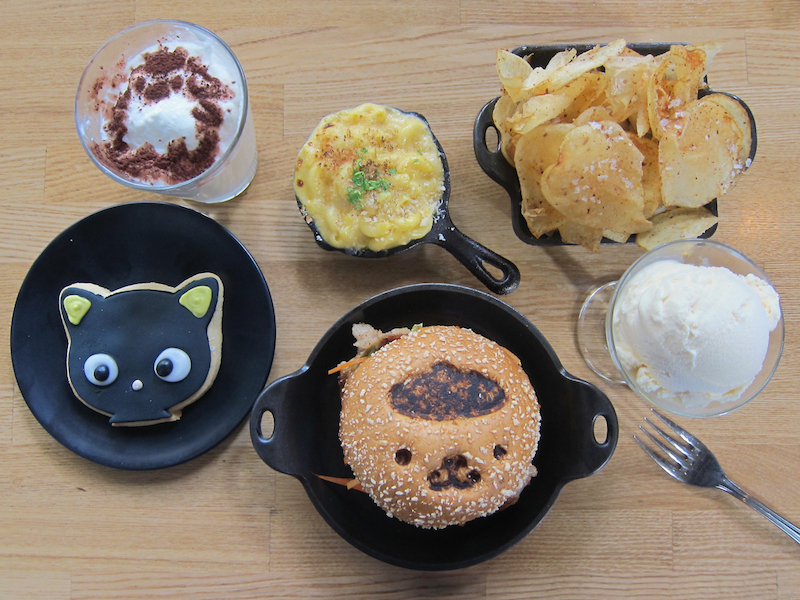 With Hong Kong having its own Hello Kitty dim sum restaurant and Singapore launching an entire Pompompurin Cafe, we can't help but yearn for our own kawaii Sanrio-themed food. Well, now's your chance to nosh on food that's too cute to eat. Plan Check is rolling out an entire meal inspired by Sanrio's Chococat and Pompompurin characters.

Last October, Plan Check created dishes dedicated to Sanrio's ridiculously popular Gudetama, which is a lazy egg that sometimes cozies up under a bacon blanket—something we aspire to do one day. The restaurant teamed up again with the Japanese giant to bring about a meal celebrating the 20th anniversary of two of its characters: Chococat (a scatterbrained feline with a chocolate-colored nose) and Pompompurin (a chill golden retriever who dons a brown beret and loves collecting shoes and hiding them).

From now until July 10, you can order the Chococat- and Pompompurin-inspired meals at Plan Check's Fairfax, Sawtelle and downtown L.A. locations. The set includes five dishes and a special Sanrio baseball cap, which will run you around $39.

We visited the downtown L.A. location to check out an early preview of the dishes. Here's what you can expect: 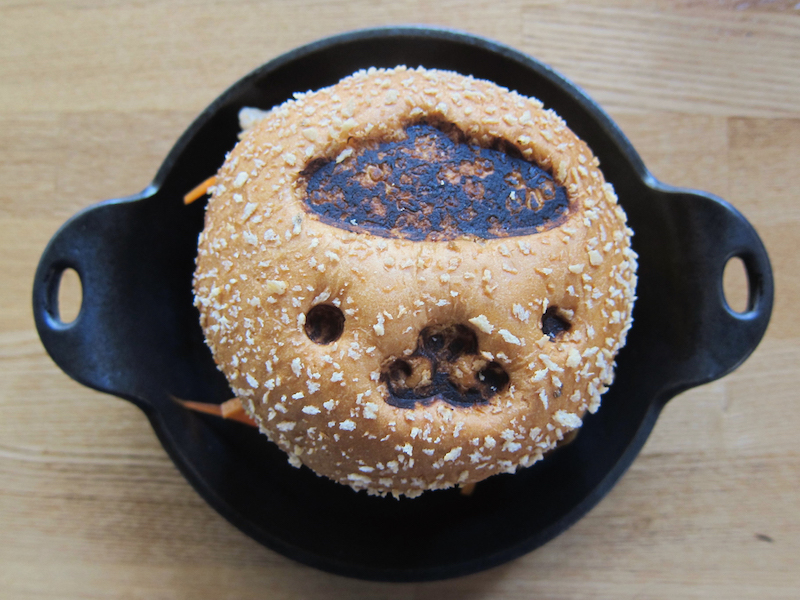 Pompompurin Grilled Sausage Sandwich: When we think of Plan Check, the first thing that usually comes to mind are their juicy burgers. But why a grilled sausage sandwich for Pompompurin? Sean Yontz, the restaurant's director of culinary operations, tells LAist that since the character is a dog, he wanted to pay homage to him with a hot dog as the main attraction. His take on the wiener, though, is a gourmet one. The house-made sausage is stuffed with pork belly and Japanese seasonings. It's sliced, grilled and then sandwiched between two fluffy and crunchy buns, and accompanied by a light kimchi slaw and Kewpie mayo with cilantro. The top of the bun is seared with a stamp of Pompompurin's face. Make sure to look at the bottom bun, too, which has its own appropriate marking. 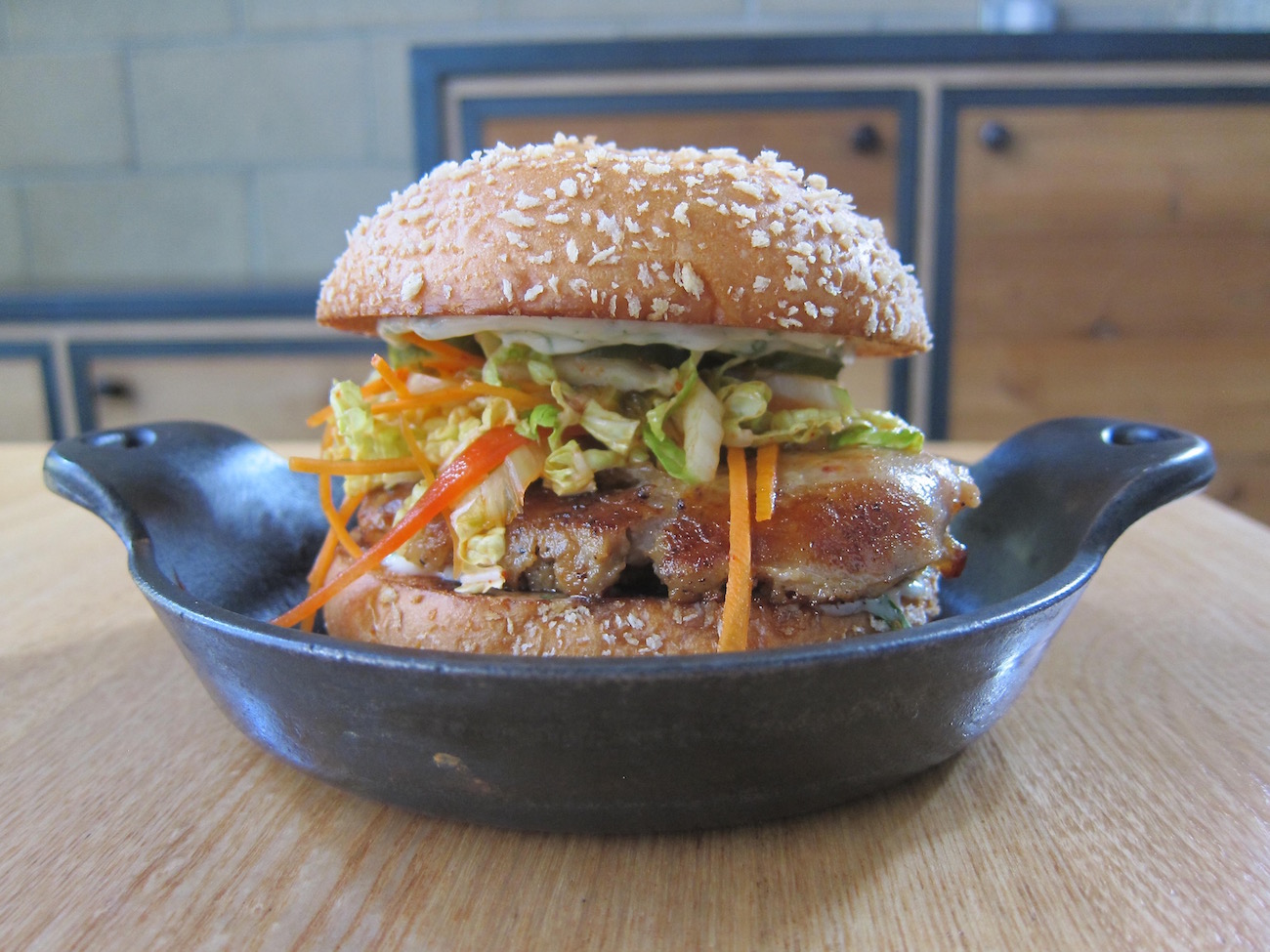 The sandwich is definitely the showstopper of all the items. The sausage is succulent and fatty, but isn't overly heavy because of the refreshing cabbage slaw. The Korean flavors stand out more than the Japanese ones. It's so tasty that we wish this was a regular Plan Check menu item. 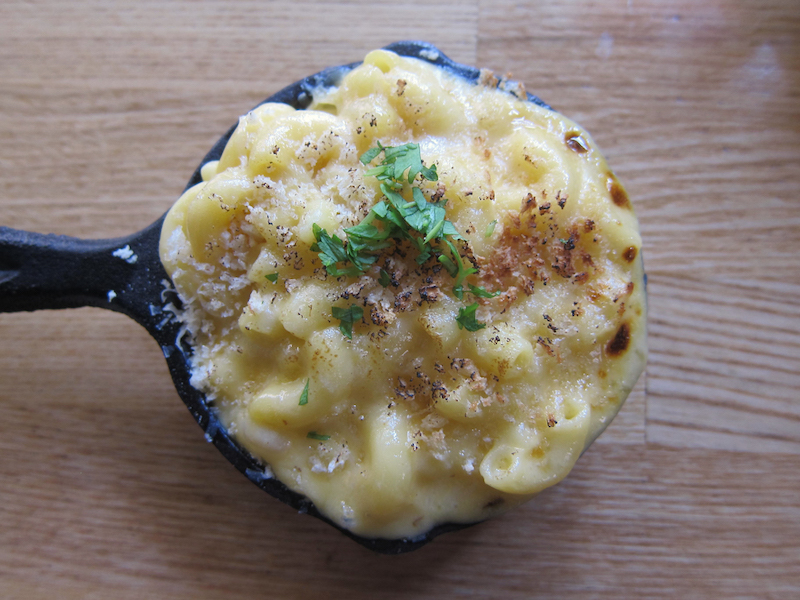 Mac & Cheese: This side is smothered in gooey Americanized dashi cheese and topped with crunchy bread crumbs and Parmigiano Reggiano. It fits in with the whole kawaii theme because it sits in a tiny cast-iron skillet that's a little bigger than the palm of your hand. While it's nothing extraordinary, it's a solid mac & cheese, and something that's only occasionally offered as a special at Plan Check. 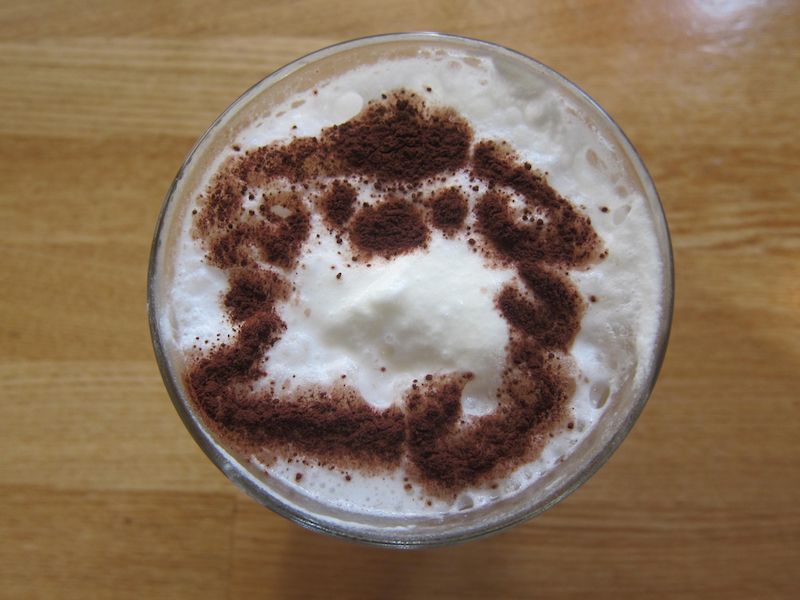 Vanilla Cream Soda: For a drink, you get a vanilla cream soda topped with whipped cream. As for the Sanrio connection, it's topped with a stenciled cocoa powder of Pompompurin. The stencil didn't quite come out as defined as we imagined it would, but hey, maybe practice makes perfect; after all, we were one of the first ones to sample the drink. It doesn't sway away from the fact that it's a tasty soda that we would get again. 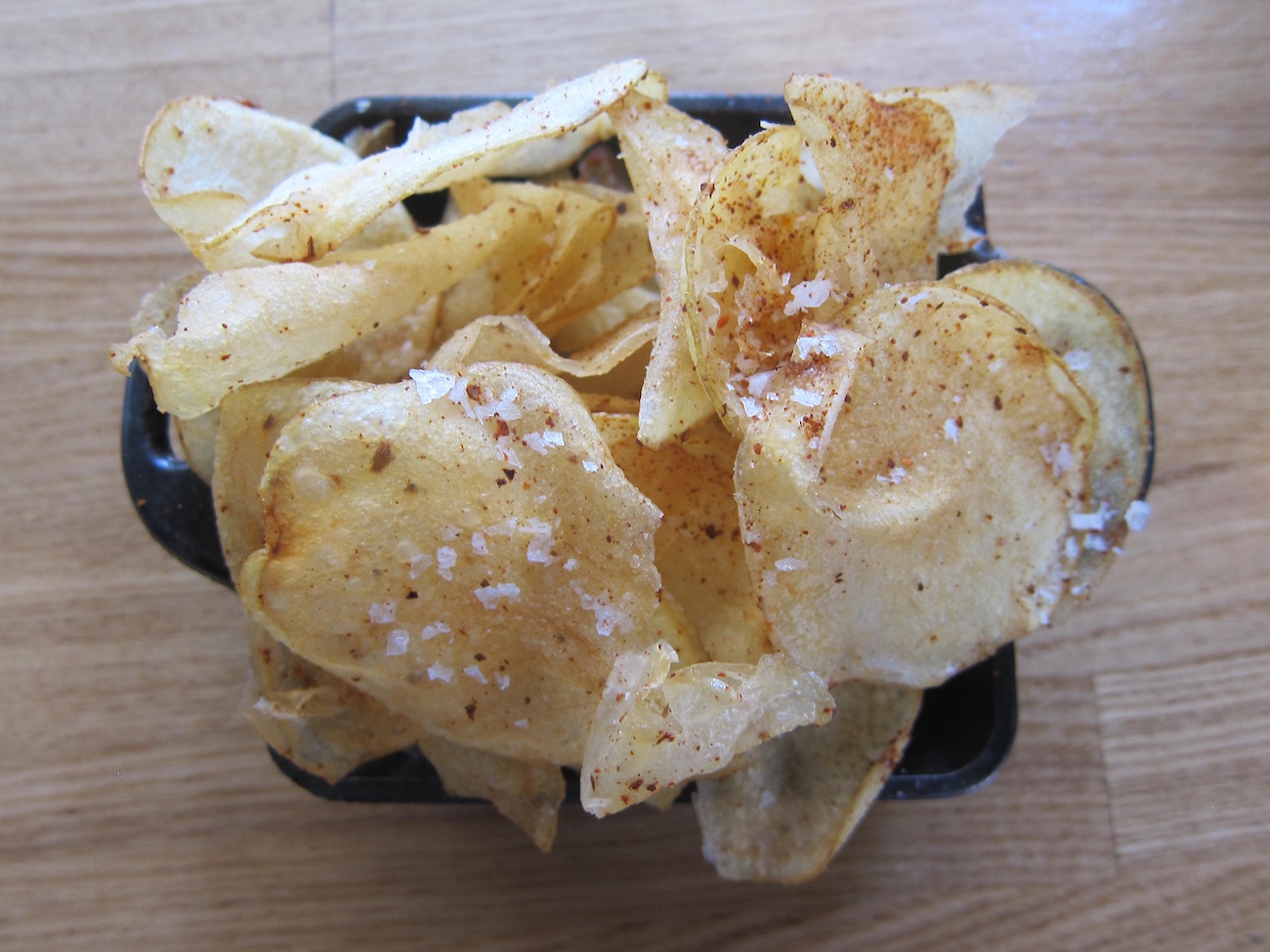 Togarashi Potato Chips: Yontz says that he got the idea to use Yukon gold potatoes to make the chips because Pompompurin is a golden retriever. They're sliced paper thin and freshly fried, and lightly topped with some sea salt and the Japanese togarashi seasoning, which is a mixture of ingredients like red chili pepper, sesame seeds, ginger and seaweed. There's a little spicy kick to the appetizer, but for the most part, they are your standard salted chips. 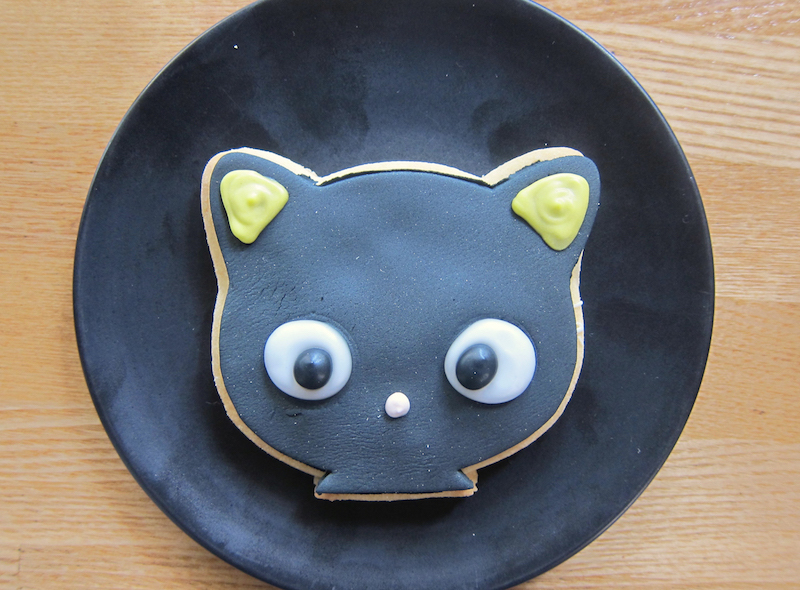 Chococat Cookie: One of the cutest character-themed dishes in this set is the Chococat sugar cookie. The cookies are specially made by Sugar Babies Cupcakery and crafted with a black frosting. It's accompanied by a scoop of vanilla ice cream to round out the meal. Cookies and ice cream are a simple dessert, but it speaks to the kid in us. 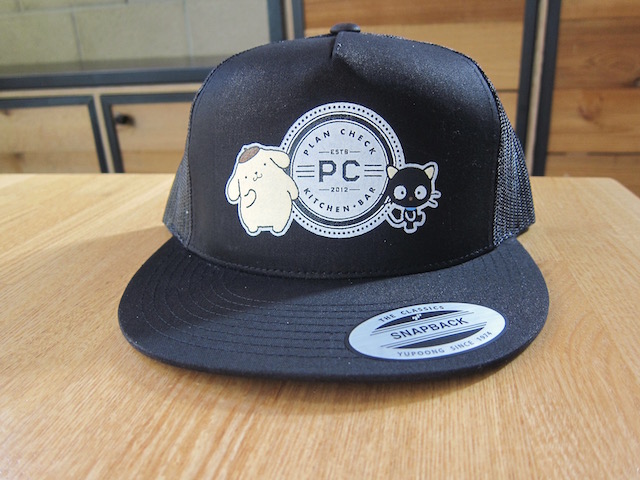 Plan Check Baseball Cap: And finally, here's something you don't eat, but wear. With your meal, you get some Plan Check-Sanrio swag to wear for bragging rights. It's a limited-edition, black trucker cap with the Chococat and Pompompurin characters emblazoned on the front. For the Gudetama series, Plan Check handed out T-shirts, but this time around, they decided on caps because Pompompurin wears a hat, says Michael Baker, the restaurant's director of operations. 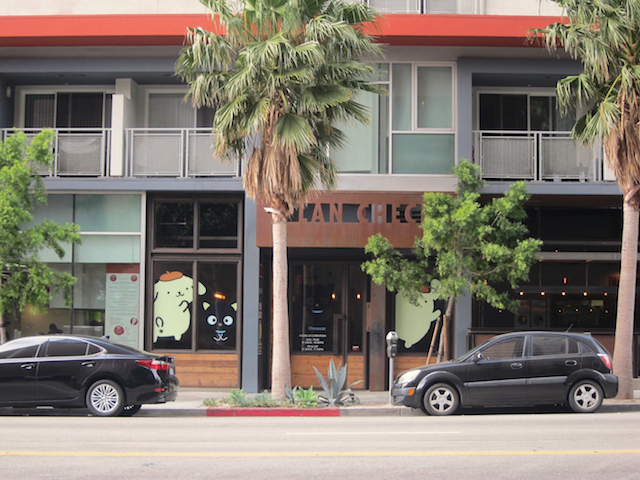 As for the full experience, the Plan Check outposts will be decorated with large Chococat and Pompompurin decals, and guests can expect surprise appearances from the characters at the different locations. You know you want a selfie with the beret-wearing golden retriever.

You'll also get to do some good when you purchase a Sanrio-themed meal. A portion of the proceeds from this special will go to L.A. Love & Leashes, a non-profit adoption center for dogs and cats. If you want to get even more meta, you can bring your pups to the Sawtelle and downtown L.A. locations that have dog-friendly patios. Pompompurin would approve. Now, where's our Pochacco-themed meal?