Photos: Enjoy A Decadent Summertime Brunch On The Guild's Patio In WeHo 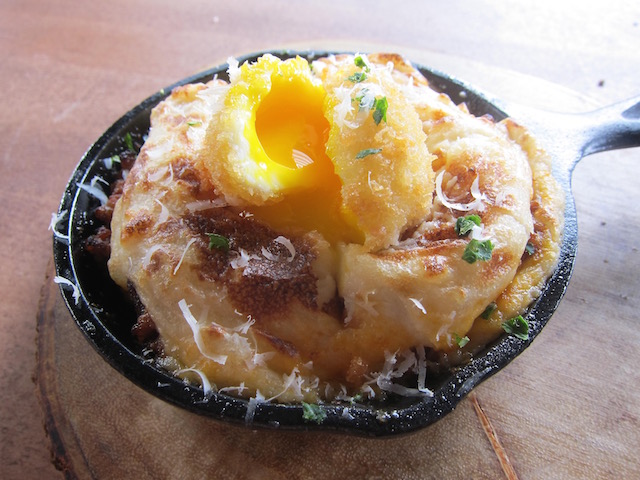 The Guild's Cuban shepherd pie—will you marry me? (Photo by Jean Trinh/LAist)

The Guild—a newcomer to the Sunset Strip—recently launched a brunch menu that thankfully doesn't rely on the same old scrambles and eggs Benedict plates. Instead, imagine twists on sweet and savory offerings, like fried chicken and Belgian waffles topped with a creamy poblano sauce and served with a sidecar of maple syrup.

The rustic restaurant is situated across the street from the Church Key, and gets its name from the Screen Actors Guild—the historic building's former tenants. Inside, you'll find a cozy spot with brown leather banquettes and distressed wooden planks lining the walls. But if we had to choose, we'd sit outside in the patio, which is the perfect spot where you could have a chill, summertime brunch. It feels as if you're dining on a friend's front porch surrounded by planters with vibrant flowers. 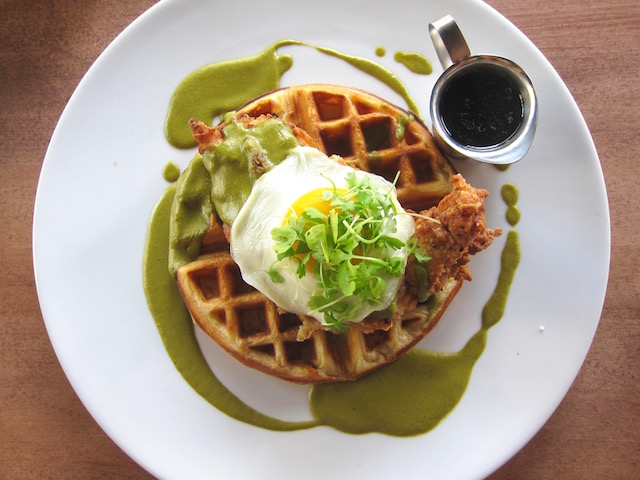 The Guild's fried chicken and waffles is smothered in a poblano sauce. (Photo by Jean Trinh/LAist)

The brunch dishes rely on French, Mediterranean and Latin flavors. There's also a Southern-inspired tinge to some of the items, like the rich, honey-and-bacon cornbread; or Cho's riff on the Benedict, which is comprised of chunks of butter-poached lobster that are smothered in a béarnaise and sits on cheddar chive biscuits.

We were recently invited to sample the brunch offerings, and found the Cuban shepherd pie to be the standout dish. Its creamy, mashed Yukon potatoes that float on top of a picadillo—a spice-driven, Cuban mixture of ground beef and tomatoes. The best part is the accompanying sous-vide egg that's breaded and deep fried. Yes, please take us to Decadence Town, USA.

There are some misses, though, like the chilaquiles. Although this dish comes with flavorful pork belly chunks, it's not enough to add a "wow" factor to the dish. 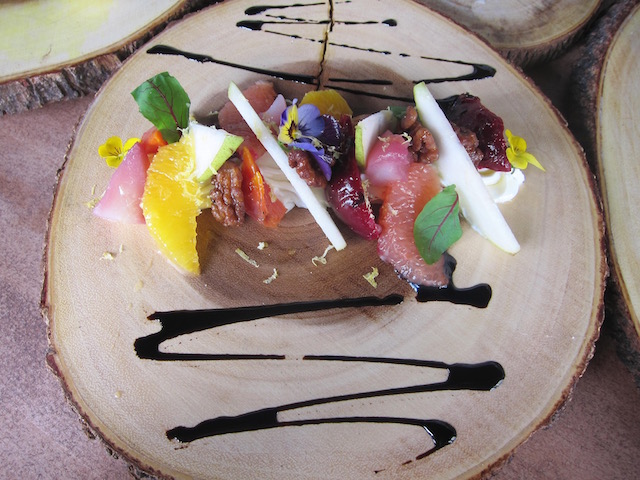 Instead try Cho's farmers market salad. The name doesn't sound particularly interesting, but it's actually one of the most delicious, refreshing and beautifully plated items on the brunch menu. It's a colorful mixture of wedges of pink grapefruit, oranges and beets, accompanied by rich goat cheese and sticky candied walnuts. As for artistic side of the dish, it sits on a tree trunk slab, and is adorned with purple and yellow flowers, and decorated with a drizzle of aged balsamic.

The Guild also has sharable cheese and charcuterie platters on its brunch menu, and some repeats of its dinner menu appetizers, like the earthy, wild mushroom bruschetta that's topped with adorable sunny-side-up quail eggs.

If you don't want to try bottomless mimosas—they have them but they can be a serious commitment—there's a brunch-appropriate sparkling wine cocktail that tastes just like a boozy orange Creamsicle. It has a nuttiness from the house-made graham cracker cream they float on top of the drink. What's a brunch without some bubbly? 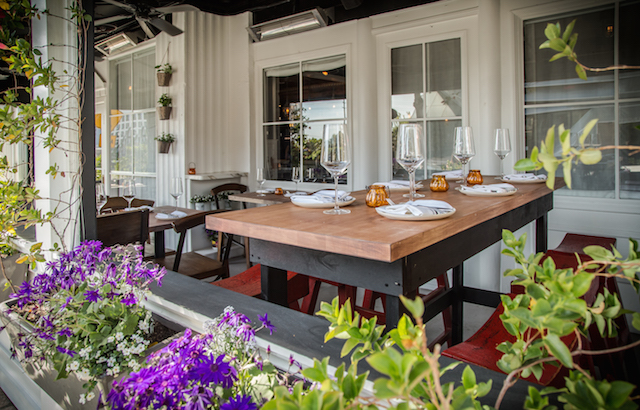 The outdoor patio at The Guild. (Photo courtesy of The Guild)