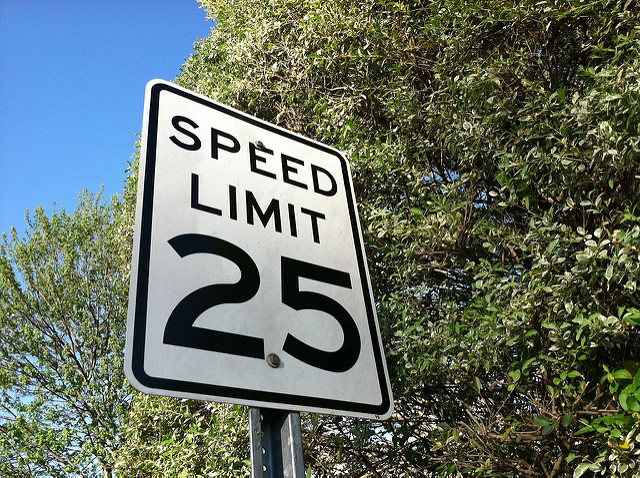 This is what the speed limit should be on all city streets. (Photo by Chad Elliott via the Creative Commons on Flickr)

In order for the LAPD to enforce speed limits on surface streets throughout the city using radar, those streets must have been subjected a traffic speed survey conducted by the Los Angeles Department of Transportation (LADOT) within the past seven (to ten) years.

The problem for the city and its police department, says a new report from LADOT, is that the lion's share of speed surveys in L.A. are obsolete. To make matters, worse, LADOT only has two full time employees tasked with conducting speed studies. Things are, to say the least, a bit behind, and the repercussion is LAPD can only enforce speed limits with radar on just 28 percent of the streets in Los Angeles that require traffic studies. For context, any street with a posted speed limit needs a study.

LAPD issued 99,000 speeding tickets in 2010, according to Streetsblog Los Angeles. That number dropped to just 16,000 in 2015. While LAPD can still enforce speed limits, they can only do so on those roads by pacing cars from behind. Pacing can be dangerous, and the preferred method of speed enforcement is with radar or lasers. However, if a road's traffic study is not up to date, the police are prohibited from using radar or laser equipment.

The reasons for this are convoluted up in a California law that prohibits police from setting up speed-traps. It used to be common in California for towns, especially small and rural ones, set arbitrarily low speed limits expressly for purpose of capturing motorists in a section of road where the speed limits changes dramatically. A road might have gone from 55 mph to 25 mph without any gradual change.

To solve this, California began using what urban planners call the 85th-percentile rule, whereby the speed limit on a particular road is set so that approximately 85 percent of the vehicles traveling on that road travel below the given limit. That number is determined using—guess what—traffic speed surveys that are required to be conducted every seven to ten years.

Speed limits are a troublesome issue in 2016. The city's Vision Zero initiative, tasked with reducing the number of traffic deaths in L.A. to zero by 2025, encourages a city planning philosophy that broadly reduces the speed (and speed limits) of vehicles on city streets. At the same time, speed limits sometimes increase when traffic surveys are reevaluated. While it may seem counterproductive to raise the speed limits in the quest of reducing traffic deaths, the governance behind Vision Zero believes it's critical that LAPD be able to enforce speed limits.

Part of Vision Zero's task was/is to keep tabs on the city's "High Injury Network" of roads, the 6 percent of Los Angeles streets where 65 percent of fatal traffic collisions occur. Speed is the most important factor when determining whether or not a person—pedestrian, cyclist, or passenger in another car—survives a car crash.

The average person struck by a vehicle traveling 20 mph has a 93 percent chance of surviving, according to ProPublica. By contrast, 45 percent of people struck by a car moving 40 mph are killed. Bear in mind that the speed limit on most of L.A.'s streets ranges somewhere from 35 to 45 mph, depending on what part of the city you're in.

As Seleta Reynolds, the general manger of LADOT said to KPCC, "If we could get everyone in the city to slow down to a safe speed, we could save hundreds of lives every year.