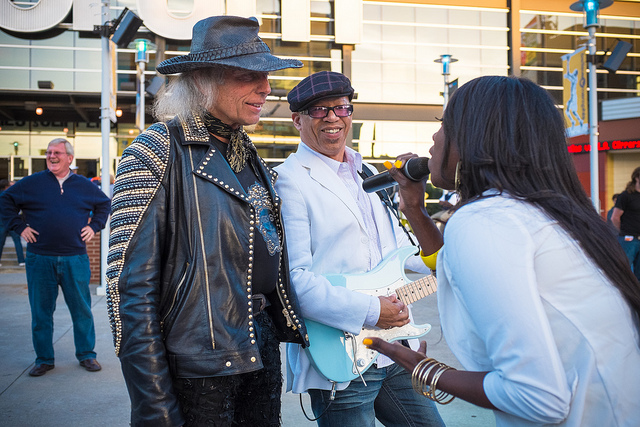 You might not recognize his name, but you recognize his look. James Goldstein is the man sitting courtside at Staples Center when the Lakers are on a homestretch. He's the guy in a frayed outback hat, a jacket made of alligator, and pants colored with zebra prints. Details about his private life are somewhat sparse, but we do know that he dates young models, hangs out at fashion shows with Kanye West, and lives in the Sheats Goldstein residence, which he recently donated to LACMA and you've seen in countless magazine spreads and in The Big Lebowski.

What does he do? How does he finance his wardrobe? It turns out he's in real estate, and, as reported by Vice, many of his tenants regard him as an "a—hole" landlord.

Among Goldstein's properties are the Colony Cove mobile home in Carson and the El Dorado mobile home in Palm Springs. Some residents at those locations told Vice that their landlord is trying to milk them for every last cent. For years Goldstein has been trying to turn the properties into subdivisions, which would give him free reign over what he could do with the divided plots (for example, bypass rent-control guidelines and force the residents into purchasing their homes). He has also attempted to raise the rent by sizable amounts; in 2007 he'd tried to increase the rent at Colony Cove by $618.15-per-month, reports Vice. The request was turned down. And each time he was denied by the City of Carson, he would come back with a lawsuit. On May 5 he won a federal lawsuit against Carson was awarded $3.3 million by a judge. "The city has been in litigation with Goldstein for decades," according to The Daily Breeze.

Why can't Goldstein just walk in and do whatever he wants with his properties? It largely has to do a bill that Governor Jerry Brown had signed into law in 2013. The bill, SB 510, is meant to "avoid the economic displacement of all nonpurchasing residents." The law meant that if Goldstein wanted to subdivide his land and turn the renters into resident owners, he'd first have to "obtain a survey of support of residents" and submit it for approval by a local agency. Needless to say, Goldstein had trouble getting the popular vote at Colony Cove.

Colony Cove residents told Vice that Goldstein has taken some retaliatory measures. They believe that he's gone lax with the security; he's removed a gate and has greatly reduced the number of guards. One resident called management to report suspicious activity and was told to call the cops herself.

The Vice piece is a big hit on Goldstein's character. And people love to hate-read stories about Bad Landlords Run Amok. But will Goldstein care enough to take action? It seems like he's pretty occupied with the NBA postseason:

And here's one with two of our greatest sartorial legends!