Hollywood Fringe Festival—an annual, two-and-a-half week long celebration of the performing arts—is upon us, offering hundreds of shows at a number of venues. We've got plays, improv, comedy and musicals, and we're also getting three unique immersive shows in the mix.

Recently, we told you that immersive entertainment in Los Angeles has been getting weirder, as well as more beautiful. It's only right that Fringe, a celebration of all things performance, should contain its own interactive plays. Unlike some of the magic shows or improv acts that will have you choosing cards or barking out scene ideas, these plays allow you to be a character in the show. 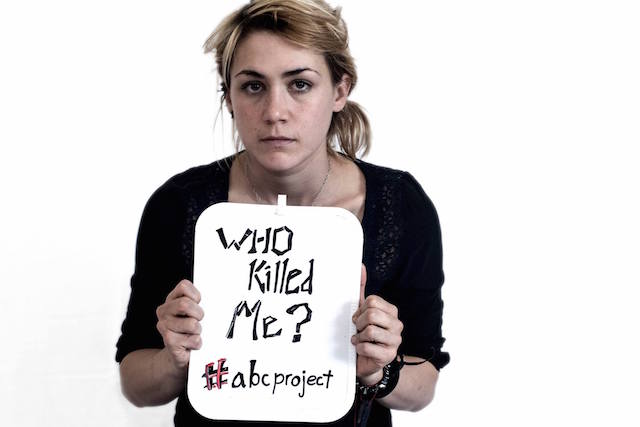 A(partment 8) from playwright Annie Lesser (whose name you might recognize, as she's also a freelance photographer who occasionally shoots for LAist) is a dark and powerful play that takes place mostly in one room over the course of only 10 to 15 minutes.

Your experience begins serenely, with a comforting beverage and a calm greeter who explains that you will be entering someone else's skin. It becomes obvious that this new person who you are about to become has done something out of character, and it's you who will now be grappling with the emotional consequences of this action. When you're finally ready to face this truth, you'll find yourself in a small room with only one actress. Without spoiling the plot, let's just say the short time you spend with her is intense. You never learn her name, but she will touch you, she will whisper secrets in your ear, and she'll make you think about who you are—which, as mentioned, has gotten confusing. It is truly impressive how much she can make you care about her, the relationship that exists between the two of you, and the ramifications of your choices in such a simple setting, with minimal props and what could be considered a complete lack of costuming.

While unsettling, there are no jump scares here and it's a very quiet show, so don't be afraid. You will be deprived of certain senses for short amounts of time, and will have to trust others to guide you. Those of you who have an issue with nudity or sexual content will likely want to buy a ticket to something else, but for those looking for a darkly original work that sticks with you long after it's finished, A(partment 8) is worth the admission price.

If you like A(partment 8), you'll be excited to know that Lesser and actress Keight Leighn are crowdfunding to make a series of 26 immersive plays, each correlating to a letter of the alphabet. Obviously, A is for apartment, and this is only the beginning. 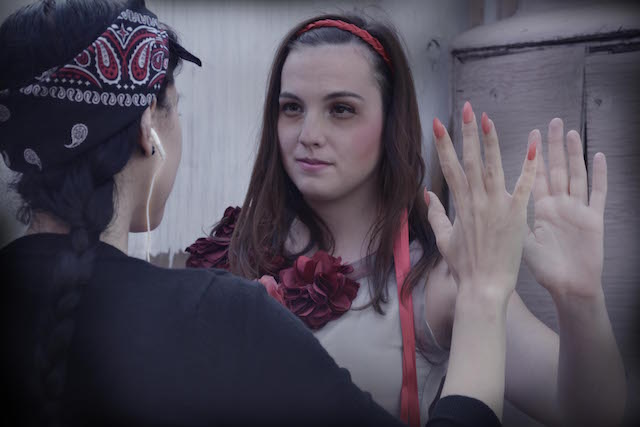 Shine On's The Truth, written by Anna Mavromati, is an interesting experimental piece. The premise here is that you have ESP and can, using headphones, hear the thoughts of those around you. You're part of a group of about a half-dozen people who have agreed to partake in an experiment conducted by Shine On Labs. You'll be asked to listen to multiple audio tracks as you walk around Hollywood, occasionally interacting with a number of characters. Some of them are disturbing, others are funny and some are clearly dealing with some internal issues. A story slowly unfolds over the course of the show, though because there's a lot going on, you're going to have to pay attention if you want to figure it all out. It's part-horror, part-sci-fi, part-mystery and also contains a fair bit of humor, with jokes poking fun at Hollywood and the film industry. Additionally, if you are given an item during your journey, remember that you have it and use it with other characters. Think of this like playing a point-and-click puzzle game. While your route and the characters you will meet has been predetermined, you will get more out of the experience if you interact.

Also, be aware that you will be meandering through Hollywood at large. You will encounter people who are not part of your show, so just ignore their confused looks as you all stand in a half-circle with headphones on, watching a dancer perform to no apparent music.

We advise you bring your own, fully-charged smartphone and headphones, and wear shoes you'll feel comfortable walking around in for about 40 minutes to an hour. 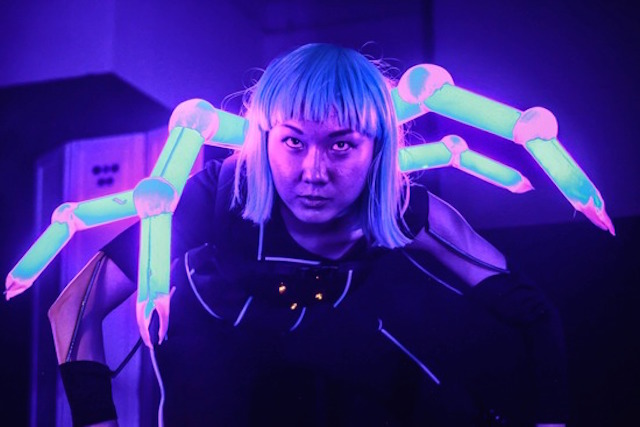 Boss round. (Photo via Oblivious)

Oblivious from playwright Jenapher Zheng combines live theater and video games. Set in a dystopian future where a totalitarian government controls us via intense surveillance, three audience members will be chosen to compete as 'players' in the impending revolution. The world is controlled by a cyborg spider queen called CaNDOS who derives most of her powers via her surveillance network, so the revolutionaries must take the system down to overthrow her. There are three timed rounds during which a different task must be completed, followed by a final boss round. Drawing from fictitious influences like Tron, Bioshock and Portal, as well as real life figures such as Edward Snowden, the show plays with tropes as it encourages audience members to get involved and make choices that change the outcome of the narrative. The rounds are timed and should a player fail, they may face 'game over' and another audience member will be chosen to taken their place. Zheng tells LAist that she was interested in how theater can be an experience versus simply entertainment, and seeks to "bridge the gap between giving audience members agency while also have a live experience."

"I wanted people to feel empowered to be a part of the story," she says.

Zheng also stars as the infamous spider queen. Expect the show to last about a half hour.