Jonathan Gold Is Going Back Down Pico Boulevard 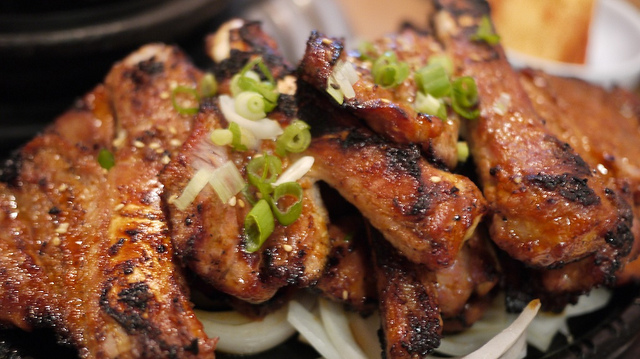 The ribs at Ham Ji Park. (Photo by patsun via the Creative Commons)

Jonathan Gold is going back to where it all started.

Fresh out of UCLA in the early '80s and working for a small paper downtown, Gold decided to go on a quest to eat at every restaurant on Pico Boulevard. It was a lofty goal, but Gold felt it would give him a literal taste of a cross-section of Los Angeles, from downtown to the ocean. He never completed the whole trek, but would later write about it for LA Weekly in 1998, in a story headlined, "The Year I Ate Pico Boulevard."

(If you haven't read that yet, you must. Go ahead, we'll give you a minute.)

Gold's Pico Boulevard adventure was also chronicled in his book Counter Intelligence, and has inspired other writers, photographers, and even Thomas Pynchon, but it has been almost two decades since "The Year I Ate Pico Boulevard," and over three decades since the the actual journey itself. A whole lot has changed since then.

Now back at the L.A. Times, Gold has embarked on a new jaunt down that humble street. His latest review for the Times ends on the unassuming note, "This is the first in a series on Pico Boulevard."

For his first entry, Gold visits the Koreatown spot Ham Ji Park, whose location did not yet exist during that famed year Gold ate across Pico. The restaurant's reputation lies in their famous gamjatang, or pork neck stew (amusingly, the Korean name translates to "potato stew"). Gold writes:


Some people think that Ham Ji Park's gamjatang may be the single-best hangover cure in an area dense in hangover cures. The sputtering-hot soup certainly feels soothing, thick with potatoes, bathed in dusky chile heat. There are probably half a dozen other gamjatang specialists in Koreatown now, and each of them is glorious in their own way, but the density, the soft meat and the piney snap of this version always strikes me as the most pleasant — ranking above even the soup at the restaurant's uptown branch on 6th Street.

While critics generally disliked Blackhat (I loved it), we can all agree on Ham Ji Park's gamjatang, right?

And after also extolling the virtues of Ham Ji Park's pork ribs (accompanied with soju, of course), Gold closes with: "And then you stumble outside, bloated and happy, on Pico in the fierce afternoon sun."

While only the first installment of a new series, we're already looking forward to what's next. Writing about places like Ham Ji Park on Pico Boulevard is what Gold does best. He can certainly write beautifully about the latest trendy and upscale restaurants in Venice and Los Feliz, but it's when he's singing the praises of humble strip mall joints and hole-in-the-walls that Gold is in his wheelhouse.