The Original Marie Callender's Has Closed Its Doors 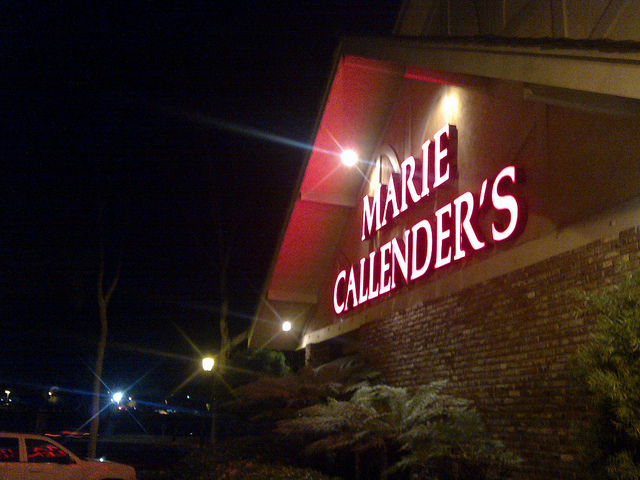 There's just something about American diners. Maybe it's the faint waft of over-brewed coffee, or the promise of pancakes at 1 a.m., or the endless supplies of coloring mats. Whatever it is, nothing says Americana—or stokes our feelings of comfort and nostalgia—like a roadside eatery.

So it is with great sadness to say that, as reported by the OC Register, the original Marie Callender's in Orange has shut its doors. A note on the door reads: "Thank you for all the love and support. We are very thankful to have shared many meals (& pies), holidays, and memories with you."

Don Callender, son of the titular baker, opened the Orange location in 1964. The family-style restaurant would later expand to become one of SoCal's most recognized pie sellers. Need to make a last-minute pick-up before a holiday party? Marie Callender's always had your back.

The franchise's early days was a close-knit affair:


Marie Callender started her home-based bakery in the late 1940s. With the help of her husband, Cal, who did the books, and son Don, she sold the family car for $700 and moved her wholesale baking operations into a World War II Quonset hut stocked with a small oven, refrigerator and rolling pins.

The closure is part of a downward trend for the franchise and other like-minded restaurants. There were 156 Marie Callender's in Southern California in 1998. Today there are only 61. Howard Johnson's, once a fixture on the American highway, is now down to two restaurants nation-wide. Many family-oriented chains are struggling to stay relevant in an era of hyper-fast service and novel dining concepts.

Marie Callender's is also responsible for this writer's favorite anecdote from a Beatle. Here's Paul McCartney in a 2001 issue of Reader's Digest:


McCartney: We had this one day off while we were recording, and it rained a lot in February in L.A. But we didn't mind because it was still nice. So I hired a little black Corvette, which is one of my little perks.

I was enjoying myself, driving around. Because it's L.A., you're in America, the land of Corvettes.

Heather and I took off up the Pacific Coast Highway past Malibu, in the rain. So we were driving in the rain and we stopped off for lunch at what we thought was a really classy restaurant. And we got back to the studio and said, "Wow, we had a great day yesterday."

We said, "Yeah, we stopped at a great classy little restaurant. You probably even know it."

They said, "What was it called?"

It turned out it's like a chain, famous for like big pies. And we thought really classy, and they're all hollering, they're all screaming, laughing. It's Americana!

I said, "What are you all laughing at?" We thought it was a find, you know.

That leisurely road trip was the inspiration for McCartney's "Driving Rain":

So long, original Marie Callender's. We'll be buying your Boston cream pies at another location.