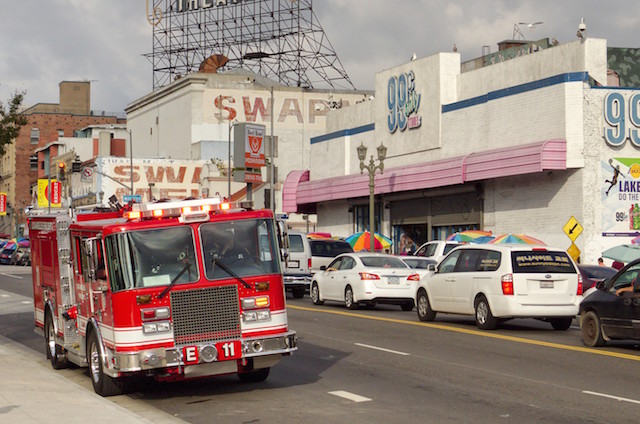 In a city of four million people, 40 so-called "superusers" accounted for 2,000 emergency responses in 2015 alone. The Los Angeles Fire Department keeps tabs on the most frequent users of emergency medical services, and shared the data with KPCC. Most of those superusers are individuals with other needs beyond those serviceable by emergency services. Los Angeles Fire Department Medical Director Marc Eckstein told KPCC that approximately 60 percent of those top 40 superusers identify as alcoholics.

“These people aren’t getting the help that they need because they typically get work up in the emergency department, they sober up, and then they leave,” Eckstein told KPCC. “They’re not getting into detox. They’re not getting housed, and our paramedics are getting tied up, and the ERs are already overcrowded.” Eckstein also explained that when ambulances are taking time to respond to these individuals, that's time that those same ambulances aren't able to spend responding to other emergencies in the community.

So, what to do? The answer, like the problem, is complex. As LAFD spokesman Brian Humphrey told LAist, "When it comes to dealing with the so-called superuser, there are no silver bullets."

"They often have bona fide needs that need to be addressed," Humphrey said, adding that the department's aim is not to stop helping them, but rather redirect them to different services.

According to Humphrey, one pilot program has already been met with some success. In December 2015, Mayor Eric Garcetti announced the introduction of the Los Angeles Fire Department’s Nurse Practitioner Response Unit (NPRU), which pairs a trained nurse practitioner with a firefighter/paramedic, enabling the emergency response to give the respondee more individual attention and better assess their needs.

"For instance," Humphrey said, "Let's say that we have a senior who is living alone and not compliant with their meds [and has made multiple emergency calls over a short period of time], the nurse practitioner would able to spend more time with them and maybe look in their refrigerator to see if there is food or look in the medicine cabinet and see if their medications are labeled." According to Humphrey, that NPRU could connect the caller with other services, or even potentially check in with neighbors. There is currently only one NPRU, but the pilot program has just been renewed for another year.

According to KPCC, another possible avenue for assisting the so-called superusers could be the LAFD's proposed SOBER Unit, funding for which will be discussed in City Council's Innovation, Grants, Technology, Commerce and Trade Committee Tuesday. The SOBER Unit would be a partnership between the LAFD and the Los Angeles County Department of Health Services.

If funded, the SOBER Unit would let the LAFD send a van staffed by an emergency responder along with a community outreach worker from the Los Angeles Homeless Services Authority to respond to calls from superusers who might be alcoholics, instead of sending an ambulance. The emergency responder could then assess the individual's needs, and if it's determined that they don't need hospitalization, they could be brought to the new Los Angeles County Department of Health Services Sobering Center in Skid Row, which will open later this year.