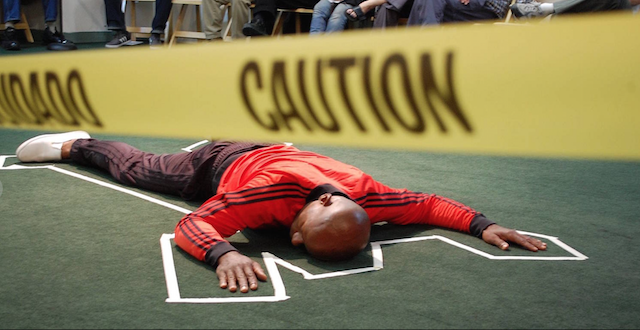 Skid Row arts powerhouse the Los Angeles Poverty Department (also known as LAPD, and yes, it's deliberate) will present Chasing Monsters from Under the Bed, a play tackling topics of homelessness and mental illness, Tuesday night at Westwood's Hammer Museum.

The play, which Claudia Bestor, Director of Public Programming at the Hammer Museum, describes as "very intimate and intense," will be performed in the Hammer's blackbox theater space.

When the Los Angeles Poverty Department was founded by activist and performance artist John Malpede in 1985, it was the only arts organization specifically serving L.A.'s homeless community. Malpede originally started the organization as a performance group, though it has since expanded to encompass the Skid Row History Museum & Archive on Broadway.

According to Bestor, the LAPD are "really the grandaddies of social practice art, working with different communities on different issues that affect our city."

Chasing Monsters from Under the Bed was first performed in November 2015 at the Skid Row History Museum & Archive. The play, codirected by Henriëtte Brouwers and Malpede, was collaboratively created and written by its cast members, most of whom are homeless or formerly homeless.

Malpede tells LAist that the November performance was the culmination of ten months of work. The play itself "was inspired by a couple members of our group, and progressive mental health practices around the country, where people with different kinds of mental issues are wanting and demanding to live the fullest lives possible, and not be relegated to the status of client or patient," Malpede said.

Rehearsals took place two or three times a week and were open to everyone, according to Brouwers, though there was a core group of people who participated over the nearly year-long process, which involved different kinds of writing and improvisational experiences.

"It took a while for people to get comfortable with the process and the subject matter," Malpede said, adding that the nature of the play was also altered by current events. "The other thing that happened during that whole process," he explained, "nationally but also on Skid Row, were the police shootings of people with mental health issues," including the May 2015 shooting of Charley Leundeu Keunang on Skid Row.

"Everyone in our group and everyone in the neighborhood was so devastated and upset by these events," Malpede said, explaining how they made their way into the performance, despite not being something they intended to focus on.

Bestor told LAist that the LAPD is well known in the art world for the work that they do, and that museum had long been interested in collaborating with them. After speaking with Brouwers and Malpede about what they'd been working on and what kind of message they might want to get across, Bestor said that "Chasing Monsters was their immediate answer, there wasn't really any ambiguity about it." 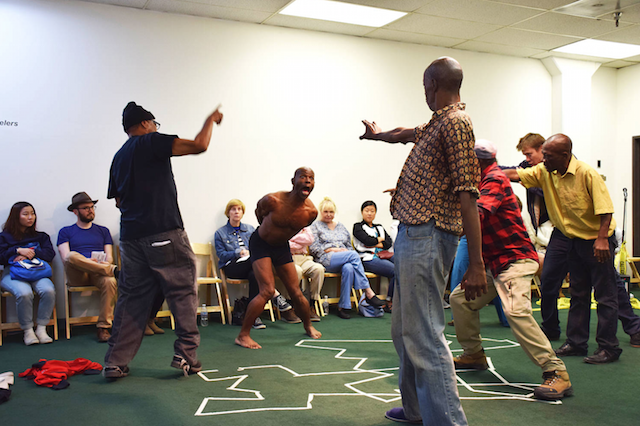 Bestor said that, at least for the last eight years, there has been a strong undercurrent of social justice programming in almost everything the museum does. To her, this work was particularly timely, and offered "a good opportunity to really drill down and discuss" issues of police violence and homelessness in Los Angeles.

"There is something interesting and important about how artists are engaging with these issues of our time, trying to look at them through a lot of different lenses," Bestor said, citing art addressing mass incarceration and the Black Lives Matter movement as examples.

On Wednesday, the night after the play is performed, the museum will host "Police and People with Mental Illness: Avoiding Tragedy, Achieving Solutions," a forum addressing similar issues to those explored in the play. The panel will be moderated by Jorja Leap, executive director of the UCLA Health and Social Justice Partnership, and will examine the intersection mental health, crime, and law enforcement with experts including Mollie Lowery, supportive housing pioneer and founder of the Lamp Community, Linda Boyd, creator of the collaborative SMART team, which pairs law enforcement officers with mental health clinicians, and Detective Paul Scire, officer in charge, Mental Evaluation Unit, Case Assessment Management Program of the Los Angeles Police Department.

"At LAPD and at the Hammer, in our own ways, we're really trying to look at all these topics and hopefully affect change for the good," she said.

HAMMER PRESENTS: "Chasing Monsters from Under the Bed" will be performed at the Hammer Museum on Tuesday, June 7 at 7:30 p.m. Admission is free and open to the public.