L.A. County Is Proposing To Tax Millionaires In Order To End Homelessness 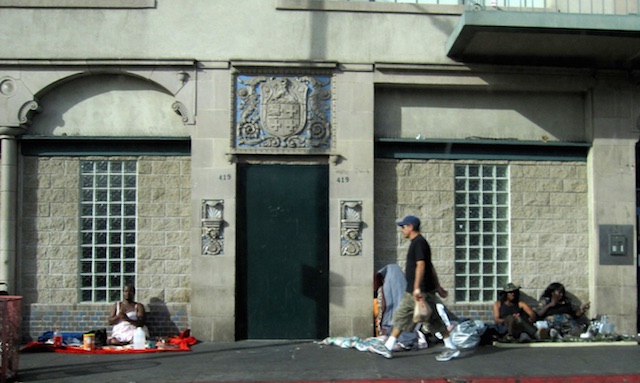 (Photo by Malingering via the LAist Featured Photos pool on Flickr)

In order to pay for its pricey plan-of-attack to eradicate homelessness in Los Angeles County, the L.A. County Board of Supervisors is audaciously attempting to place a 'millionaire's tax' on the November ballot for the voters' consideration. The proposed tax would take a half-percent of personal incomes exceeding $1 million annually countywide, and devote the revenue towards funding the county government's 47-point plan for ending homelessness in Los Angeles.

According to a poll conducted for the county government, a whopping 76 percent of L.A. County residents favor the proposed tax on L.A.'s many millionaires. The proposed tax is estimated to produce anywhere from $250 million to $300 million annually. While this isn't enough to fully fund all the programs the county wants to enact to fight homelessness, it's enough to fund significant progress.

Actually getting the proposed tax onto the ballot, however, is far easier said than done. Under present California law, county governments do not have the authority to levy direct income taxes, which the proposed tax fundamentally is. In order to gain the authority to tax income, state lawmakers in both houses of the legislature, as well as Governor Jerry Brown, need to approve the county's proposal. This is a very hard sell, but dozens of county workers and lawmakers are acting quickly to turn the pitch into reality.

Last week, County Supervisor Mark Ridley Thomas visited Sacramento to rally support in the California State Legislature for the proposed amendments. On Wednesday, a coalition of 29 state legislators signed an open letter to the Governor and other top state legislators pressing for the approval of a bill that would grant the L.A. County Board of Supervisors the ability to place the proposed tax on the ballot.

"I am really grateful for all the support this common sense proposal is generating," said Supervisor Sheila Kuehl in a statement. "We have an unprecedented opportunity to create a sustainable and substantial revenue source to fund our efforts to end homelessness. Legislators and members of the public alike understand that this is the critical time to act."

The timeline, however, is very short. In order for the proposed tax to be placed on the ballot, both houses of the state legislature need to grant permission for L.A. The specific piece of legislation that must be modified is a budget trailer bill that is scheduled to be voted on by the legislature on June 15th. Governor Brown must then approve the bill by June 30th for the county to fulfill ballot filing requirements in early July.

Though L.A. County has approved a strategic plan to combat homelessness across the southland, funding the plan is still largely up in the air. While L.A. County has allocated $100 million specifically for the homelessness cause, the county ultimately lacks a sustainable revenue source to fund anti-poverty and mental health programs long-term. The millionaire's tax is viewed as a sustainable option.

This is a pretty big deal, and represents a rather fundamental, ultimately localizing shift in how local governments could look for revenue in the future. Coincidentally, the board's two Republican supervisors, Don Knabe and Michael Antonovich, do not support the proposed ballot measure. Knabe specifically worries that voters will be bombarded with tax options (for things like parks and transportation) in the voting booth come November. At the same time, authorizing L.A. County to collect income tax sets up a slippery-slope for future funding options.

"The unprecedented ask of the State Legislature to give the County the authority to impose an income tax will open the door to serious unintended consequences in the future. If this proposed measure is approved, the next time the County goes to the State seeking funding for infrastructure or jails, we could be turned away and told to seek the means directly from our residents," said Andrew Veis, Knabe's Assistant Press Deputy, in a statement to LAist.

In the event L.A. County is not granted the authority to collect income tax, the board of supervisors is prepared to explore other options. The most promising second option would be a 1/2 cent sales tax. 68 percent of L.A. County's residents are in favor of that option, 8 percent less than the 76 percent who favor a 'millionaire's tax.'